Modern Midsomer Murders is often less intent on creating a strange mood or introducing quirky characters preferring to have a more grounded approach with just a few odd moments. There are episodes of recent vintage that could easily be mistaken for one of many other series. `Happy Families` however is not one of those but rather a well constructed gem that knowingly plays the tropes of detective fiction- especially that of Agatha Christie to whom this seems to be something of a tribute-  and yet seems fresh. Its set almost entirely in the house and grounds of  Victor Karras, millionaire games manufacturer, a grand estate  which can only be reached by a rather rickety looking ferry to the mainland. We know something will happen because the camera keeps focusing on just how rickety this metal vessel is... 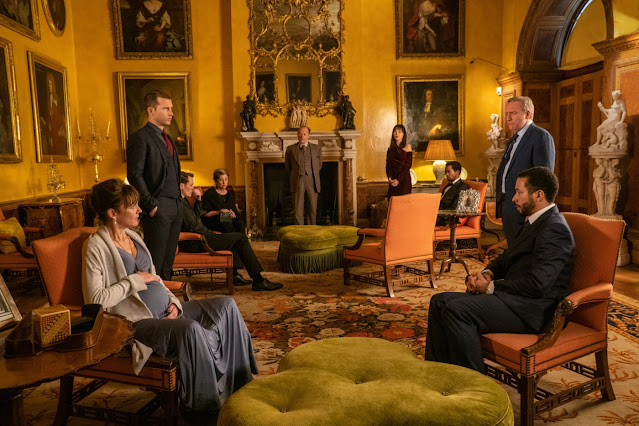 Victor Karras is celebrating his birthday in style. There are canopes, champagne and also a murder mystery game the first part of which plays out in the opening scenes with an argument and a waiter who is stabbed. Right away you think you know where this is going but once the door is closed the deceased waiter gets up and we find out that this is something of a family affair with he and his parents stage these weekends. The first real murder happens shortly afterwards when ## collapses, falls down the stairs and in doing so causes an imposing statue of Egyptian god Anubis to fall on him impaling him with its spear. This is definitely what we want to see!

What follows is a micro mystery as with most of the guests having been sent home to avid being stuck on the island by an oncoming storm, the latter arrives sooner than expected. The parlous ferry is unshackled and drifts away leaving Barnaby, Winter and a handful of key players trapped in the house for what turns out to be two and a half days. During this time Barnaby receives unwelcome assistance from the pretend detective Hugo Welles and uncovers plenty of motives involving both business and family issues.

In many ways this is all material we’ve seen before, both in this series and many others, yet the approach of the episode keeps it absorbing. The dialogue is livelier and broader than in a lot of recent episodes and feels more like natural conversation. The show’s traditional slow, atmospheric camerawork is replaced but quicker edits that make matters flow. Instead of lengthy question and answer sessions the episode uses flashbacks like the Agatha Christie adaptations frequently do. They bring matters alive more for the viewer. Sometimes a ninety minute episode has its longueurs but there is hardly nay filler material here as writer Nicholas Higgs-Beach fully explores our characters and situation. The script by Nicholas Higgs- Beach adds enough content to make it more than just a slavish copy and there are plenty of misdoings for Barnaby to dig out as well as the murders as each of the characters has sides to their involvement to Karras than it appears at first.

Even the music is different; again, this reminds me of episodes of Marple  with staccato notes and a score that suggests mystery rather than the faux horror scores Midsomer Murders often uses. The mystery itself seems to be represented physically by a Chinese puzzle box to which we keep returning, another touch that could be right out of Christie. 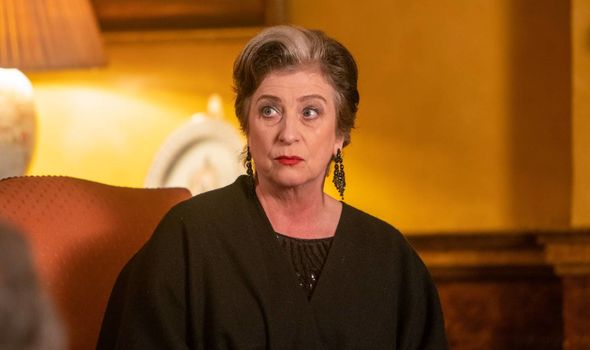 The excellent case is headed up by Caroline Quentin who has done so much comedy and house restoration presenting that its easy to forget how good an actor she is. As Helen Welles she is full of confidence at first but as matters turn and, especially later on when things get darker, she is superb in a manner that the heightened nature of this series doesn’t always allow. Her ultimate sadness and regret are so well played. Adrian Edmundson plays her husband Hugo whose well intentioned channelling of a detective plays well against Barnaby’s irritation at his attempts to help. Rachael Stirling is also excellent as Karras’ widow who is actually pregnant though as a surrogate for her sister Alicia played by Georgina Rich. Both are excellent as these characters ebb and flow in our speculation as to whether they had anything to do with Karras’ death or not. It’s a good episode for both Neil Dudgeon and Nick Hendrix too though even after all this time Winter seems to lack a particular quirk to give him more character. Hendrix does his best but nobody seems to write him as anything more than a detective at least in the episodes I’ve seen. This Barnaby has now been at it nearly as long as his predecessor and this episode starts with him in a mood over something seemingly trivial but the matter is rather well concluded at the end.

There are only two deaths yet the tension is racked up by the theatrical storm that bangs on the windows and casts eerie shadows in this big house. A couple of times the camera catches a weird sailor model in the window which will really give you the creeps. Director Audrey Cooke really explores all the possibilities with the Christie touches so strong at times you expect to see Miss Marple or Hercules Poirot arrive. As for the shot of Fleur in a red cagoule fading into the distance perhaps Don't Look Now was more the influence there?  While it wouldn’t be accurate to call this episode original in itself for Midsomer Murders it is different, a pastiche of another part of the genre that seems to suit the series rather well. Involving and entertaining throughout, it  shows that changing the programme’s style a little from time to time can be to it’s benefit
Posted by John Connors at 22:34