Yes fans in 1972 may have been puzzled by the choice of Alan White to replace Bill Bruford as the band’s drummer. The latter was, by his own admission, a “jazzer” prone to adding elaborate fills and quirky signatures that were a key part of the band’s early sound. White on the other hand would be seen as a more straightforward player whose unobtrusive presence can be heard on the likes of John Lennon’s `Imagine` and George Harrison’s `All Things Must Pass` though you’re definitely aware of him on `Instant Karma`. How many people at the time though even knew he was part of those albums? As it turned out Alan White was exactly what Yes needed to move forward. Locked in with `lead bassist` Chris Squire this rhythm section would propel the band for more than forty years until Squire’s death in 2015.

Alan White was born in Durham in 1949 into something of a musical family- both his father and grandfather played piano and he had an uncle who was a drummer. He was thirteen when he first joined a band and after leaving school worked on the cabaret circuit with a band called Griffin through whom he met Alan Price which got him into the session musician world. He spent two years in Terry Reid’s band. He first worked with John Lennon in 1968 (he thought the phone invite was someone pranking him!) and would appear on the `Imagine` album including the iconic title track and `Jealous Guy`. He was also on George Harrison’s epic `All Things Must Pass album`. It was through his flat mate Eddy Offord that White first encountered Yes, Offord being the band’s recoding engineer. When Bill Bruford quit to join King Crimson, White was invited to step in with just three days to learn Yes’ complex set before his first gig in July 1972. It would two years before he appeared on his first Yes studio album , the double `Tales form Topographic Oceans` though he rated the subsequent `Relayer` as his best work with Yes.

White proved himself far more varied a drummer than his previous form may have suggested. He drove the band’s epic music with power, dexterity and was also more than capable of jazzing it up a bit if needed. He could be thunderous as on `Machine Messiah`, Gates of Delirium` or `Big Generator` but he could also be feather light in parts of `Awaken`. Sometimes he’d keep us waiting as a quiet intro made way for him to crash in as on `Real Love`.  Even when fed through the computerised mass of the `90125` album his drums still sounded human.  He would provide the foundation that some of Yes’ less conventional songs needed like the way he anchors the odd rock and roll of `Going For The One`. He even played piano on some tracks. He wrote for the band too with credits on all the tracks on several albums including 1974’s `Relayer`, 1980’s `Drama` and several later albums. 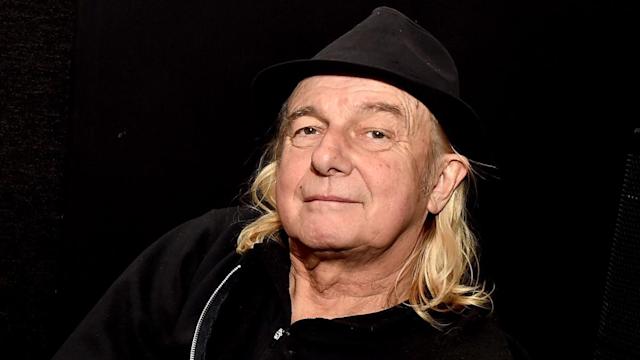 These lesser known records are especially adept at highlighting his springy sound, especially 1994’s `Talk`. Surprisingly perhaps he shares credits on the poignant `Turn of the Century` which is about as far away from `Gates of Delirium` as you can go! White’s skills meant that whatever direction Yes chose he was able to steer it there which gave the band such immense musical freedom.

When it came to a period when each member of the band released a solo album (it was the Seventies!) White’s offering was `Ramshackled` an eclectic mix that incorporated both jazz rock and prog influences. Yes split for a few years in the early 1980s during which time he and Squire almost formed a band (XYZ) with Jimmy Page and Robert Plant till the latter dropped out. Squire and White also recorded a forgotten and overlooked Xmas single `Run with the Fox` before a new band they formed with Trevor Rabin ended up as another incarnation of Yes. This would give them their most commercially successful period thanks to the single `Owner of a Lonely Heart` and the `90125` album. They’ve carried on recording and touring ever since albeit rarely with the same line up and to diminishing returns.

In one of his last interviews six months ago, White provided something of a definitive take on what the band were all about; “Yes has always been a band that looks over the horizon not at it” he said. Thanks to Alan White that horizon was an impressive one indeed.