Grand Designs has no right being as interesting as it is. After all it is a series about building houses and is suffused in the minutiae of the trade- rivets, render, budgets, bricks, mortar and mortgages. Yet for almost 20 years it has been one of the most watchable television programmes around. In case you’ve never seen it, the premise is filming ambitious building projects often over years from planning to completion. Every few months host Kevin McCloud pops in to check on progress often declaring that he’s not sure whether the thing will be finished let alone be aesthetically correct. At the end though he is impressed enough to deliver a three minute monologue about the qualities of the house often veering into poetic reverie over gutters or huge windows. 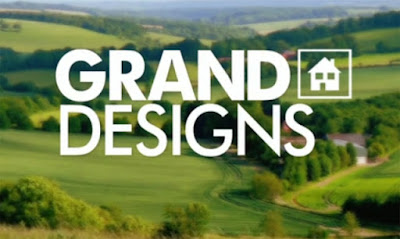 A lot of programmes are described as `reality tv` when in fact they are artificial situations manufactured to derive the desired responses like I’m A Celebrity or cooking contests. Grand Designs on the other hand is very real for those involved. It has no guaranteed outcome – filming often starts before a hole is dug and sometimes ends before the entire thing is complete. Along the way we see relationships between customer and contractors strained, budgets run out, peculiar planning rules bring matters to a halt or very real accidents. This is real life- often the result of these problems is potential financial ruin and the ultimate possession of a white elephant of a place. So when it goes right- which most of them do in the end- it is a moment of rapture for the customer, presenter and viewer alike. Somehow it feels like we've all shared in the stress and strains of the build.
The sort of projects the programme specialises in are ambitious ones. An eco house built into the side of a hill, a building slotted into a narrow odd space between other buildings, a dwelling that sits on land by a river, a barn conversion or a restoration of a crumbling listed and also listing building that can’t even stand up on its own. There have been houses built out of tyres filled with mud or constructed from timber sourced from nearby trees. There have been houses made in empty churches, an old water tank and in one case a castle! New builds have been all shapes and sizes- a lot of the finished ones are reminiscent of office spaces with balconies overlooking vast hallways while others use recycled materials to coat the exterior, “It’ll look fine in five years time” they try and convince us (and probably themselves). 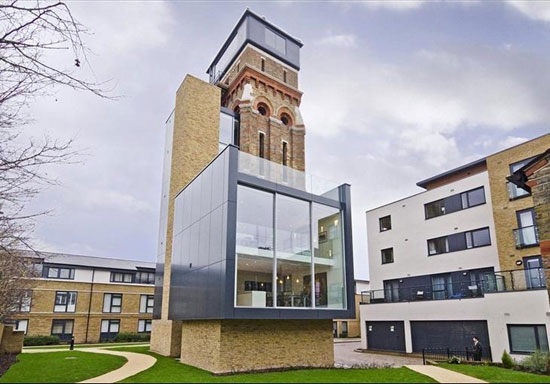 One of the most gruelling was a timber house in the middle of a forest constructed using wood from nearby trees. Some of the builds involve contacting neighbours who never look happy- there was one where the site encroached on the back gardens of over a dozen people.. Some are super sleek- I remember one house whose walls and roof were constructed in a German factory before being sent over here and winched into place like a gigantic building toy.
These Herculean projects seem like they can never be achieved despite the breezily narrated computer simulation yet 55 minutes later we are walking through white walled, subtly lit , gleaming kitchens because against all the odds it has happened.
Inevitably certain aspects repeat themselves however differing the projects are. These are Grand Designs’ most familiar things  –
# People without any such experience wanting to act as their own project manager to save money.
# The increasingly sophisticated computer designs of what the finished house will look like. The latest ones are markedly more flexible and realistic than in the early series. And always the roof floats through the air and lands on top of the building in the exact opposite of how it is in real life.
# Projects with wholly unrealistic deadlines “we’ll be moving in by Xmas”  they say prompting Kevin to cheekily ask “Xmas next year?!”
# The long suffering `other half`- a husband or wife or partner who clearly does not have the same deeply involved interest in the project and looks increasingly pale as the cash drains away on some radical cladding.
# The windows not being delivered before winter time meaning the interior of the just completed walls is open to the elements.
# The money running out and the work coming to a halt.
# Enormous quadruple glazed windows that have to made in Norway or somewhere and shipped here. Only when they are being installed does anyone ask; “Will they fit inside the frame?”
# The expression on the contractor’s face when the do it yourself project manager decides to change something after the walls have been put up.
# Enormous kitchens. Everyone wants enormous kitchens.
# Underfloor heating. That’s heating under the concrete so what happens if it goes off? Nobody ever asks this- do they have to drill into the floor to fix it?
# Nobody has curtains or blinds meaning the families every move is able to be seen by neighbours unless the house is in the middle of nowhere (and sometimes they are).
#The View. There is always a signature View to be had – unless its one of those houses in the middle of an urban location- and this View is always magnificent.
#The cladding. Few projects are content to just have bricks or render for the exterior . Oh no it has to be reflective zinc patterned tiles or in one case old metal sheeting that would degenerate over the years.
# The final approval. The lime coated triangular spire is “a triumph” after all and as Kevin traverses the finished interior, up the bespoke floating staircase he finds that the house which 55 minutes earlier seemed like it would be a disaster is actually incredible. 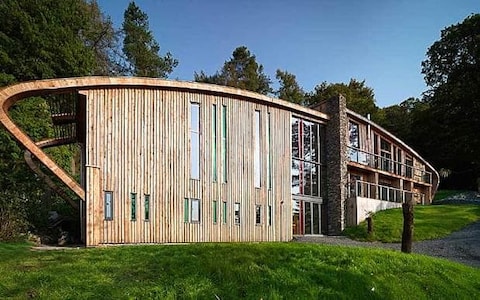 All the way through Kevin McC challenges and gently warns the people about the risks and issues at hand and is not averse to demonstrating these with small scale models. Halfway through he is never sure – either due to aesthetic, technical or financial reasons- that it will work but by the end he is rhapsodising about the curves or how it is at one with its surroundings. Being both an expert and a good presenter he makes the series more interesting than it might otherwise be.  I’ve only seen one episode where the project fails and that was someone who tried to construct a floating house by sticking all kinds of materials on the outside of a boat which was as bad as it sounds.
First shown in 1999 there have so far been 198 different projects featured and the series continues towards its 20th anniversary next year. Its spawned spin offs, foreign versions, a regular magazine and Grand Designs Live, a show the public can visit. And it has probably inspired viewers to ponder on the practicalities of constructing a circular house perched on the edge of hillside with a viewing tower clad in hazelnuts and a room made solely out of crystals. Next series perhaps?