Reacting to HMV going into administration

So HMV may not make its century anniversary after all. We’ve been here before of course. A major well known chain announces administration and in most cases cannot out run the inevitable but some may have viewed HMV as the great survivor. Until the past year predictions that physical media would no longer exist by the end of this decade have seemed wide of the mark. Though Bluray never really took flight DVDs and even CDs are still being bought in their masses whether in shops or  online. The glimmer of hope for HMV was that this could continue- and that the increasing resurgence of vinyl might help- but something in the past year has changed that. 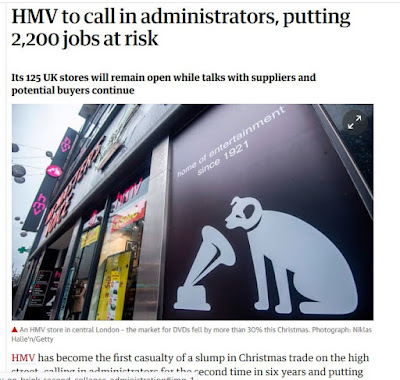 HMV was in administration in 2013 but rescued by Hilco and eventually survived albeit in a leaner format. The enormous megastores of the past were gone but HMV remained a presence in most major cities and towns with 125 stores. What nobody could have forseen just five years ago was Brexit – now causing evidenced reduction in people’s spending - and most of all the rise of streaming services which are cheaper than any physical format could ever be. DVD sales which had held up for so long finally look as if they are crumbling and with it the final peg holding up the firm is gone. It is very difficult to see how they can survive. In fact this may well be the actual end of physical media some six or seven years after it was predicted as HMV account for the biggest amount of such sales in the UK. What business person would take them on now? The Mirror newspaper- itself in a sector that could easily go down too- today printed a list of stores at risk which included every one of them!
The announcement that HMV was back in administration may have taken some by surprise but for those inside the retail industry it was a sobering confirmation of what many had feared. Now it is not just the potential disappearance of HMV that spooks them it’s the fact that developments in the entertainment sector tend to foreshadow what happens in others a few years later. Many had believed that what high street shops would ultimately be boiled down to is one retailer per sector but if HMV goes there will be no music retailers remaining on high streets. This means that potentially where you might see for example John Lewis surviving even if Debenhams doesn’t the eventual likelihood is both could vanish. Experts, councils and other parties are trying to resolve the long term issue of just what would then be done with all the empty shop units.
This decline in physical stores has the potential to take under even those who own the properties which means it is actually in their long term interest to reduce business rates something they seem unwilling to do; HMV’s are said to be a whopping £15m.  This will come back to bite landlords if they don’t exit altogether in time. The question now is not how many shops selling products (as opposed to hairdressers and the like) will survive but whether any will. A recent report estimated the UK has twice the number of physical shops it needs.
Despite this gloomy picture the fact is that physical media remains a large market with possibly five years life left in it at least. In the short term there is money to be made but possibly just no longer in shops. HMV haven’t helped themselves in some respects by making their stores smaller thus removing many titles from the shelves. While Amazon is no longer the cheap option it once was many things remain lower priced than the HMV alternative. And people with longer memories will recall how HMV themselves were the Amazon of the day using their size to gradually overcome their rivals. Streaming is a comparatively recent media and there are too many players so in a few years time some of them will start to merge or fall too. HMV’s story – and those of some other major names doomed to fall in the coming few years – shows how nothing at all is certain in retail.