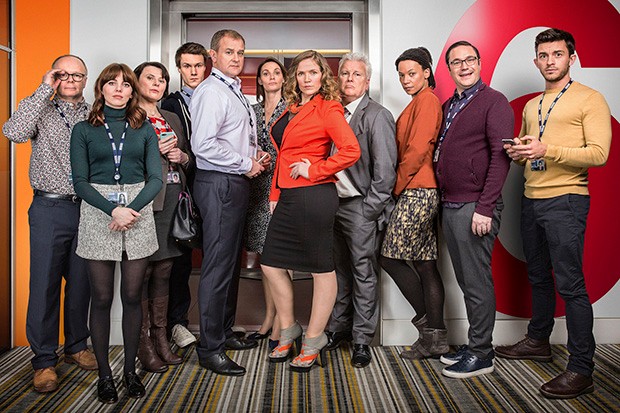 The series has actually become more prescient as since it began the news has had several instances where a major organisation has said or done something widely seen as incorrect and here we get to see the chaos that ensues after such an outburst. That said, there are signs of fatigue in some of the scenarios. Whereas in the first two series the characters’ quirks were at the service of the ongoing story, this third and apparently final outing sees many of them veer close to the old Fast Show model where people pop up with the same catchphrase every time. There are probably too many characters now, some have little more to do than utter the same brief dialogue “Excellent” “Exactly”, “Very good” etc. That said when one of the meetings is in full flow and the zippy editing is in play the results are still very amusing and you find yourself laughing anyway!
Some of the characters have been developed in interesting ways too. Ian Fletcher himself has become something of an asset while all around him are flailing and on two occasions in this series saves the day with an off the cuff speech.  Nina Sosanya’s Lucy Freeman facing the potential loss of her job starts to hint at an attraction to Ian that is so subtly played you wonder how much was in the script and how much the actors thought of it. There’s also a satisfying development for Rufus Jones’s over enthusiastic David Wilkes whose manner of nicking other people’s ideas (“It’s genius”) and making them his own while also making them worse is given even more space this time. Jason Watkins doesn’t get enough screen tome but his Simon Harwood is a delight at doing nothing except somehow managing to collar director general Tony Hall every day for a “macchiato moment”. 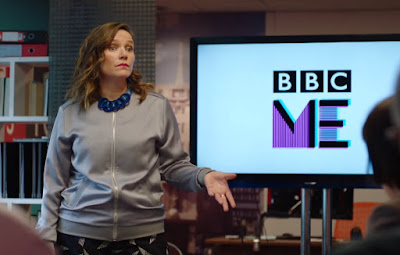 Monica Dolan’s Tracy Pritchard remains a marvellously observed practical voice in the room with her “I don’t mean to be…” phrase while Jessica Hynes’ Siobhan Sharpe is a splendidly ghastly creation whose modern agenda is fuelled solely by enthusiasm and no knowledge at all.
The main plots this series are excellent notably the idea for a new channel which is called BBC Me. “Basically it’s You Tube” as Tracy Pritchard surmises but it goes ahead anyway and somehow becomes entangled in a separate idea for a programme called `On Your Bike`. The way these two strands get caught up together provides the series funniest moments. As ever it is the closeness to what could actually happen that makes W1A work so well- remember how the real BBC3 logo mirrored a potential logo re-design in a previous series? Here, BBC Me’s slogan BBC Me- It’s You is uncannily like the sort of thing you could see in real life.
The other main plots involve two celebrities- one imagined-  a cross dressing footballer, the other the real Claudia Winkelman. It always adds when real celebs become involved- this time there are cameos including Gary Linekar and Hugh Grant while the actual Tony Hall does appear in the least episode. The undercurrent of potential job losses drives several of the characters as well adding a less comic element that balances events elsewhere. Overall there is a marvellous air of controlled panic highlighted by one episode where a meeting has to make a decision within an hour and manages not to even get round to discussing the issue in question!
Not everything works; the ongoing Izzy / Will storyline is lacking the vigour of the other strands as neither characters have changed since series one and they needed to. Also there is a strange incident when Anna collapses which isn’t really followed up and seems to serve no purpose. I also think it might be better if BBC Me ended up not being launched as of course we know it wasn’t. Unless of course it is just round the corner!
It is tempting to want a fourth series as W1A remains a very funny show but I feel that maybe it has gone as far as it can and to stop it now leaves a very high standard of episodes that finely balance reality with imagination while frequently being extremely funny. Quite. Exactly. Very good.
Posted by John Connors at 20:59