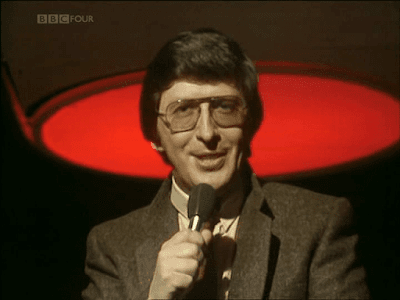 [4] The Beatles: Love Me Do. Simon Bates introduces The Beatles in another hilarious Halloween insert. This time he's standing next to a giant smoking cauldron and assailed by rubber bats flapping on a fishing line. Simon Bates, giddy with adrenaline, decides to go off script and grabs one of the bats. "Ooh hello darling," he says before kissing the bat and discarding it with the line, "someone I know." This appears to kill the bat stone dead. It was flapping around happily before the kiss, now it just dangles lifeless. Meanwhile, on film, it's The Beatles. (John- Er, hang on isn’t it 1982?)


[35] Blue Zoo: Cry Boy Cry. Uh-oh, it's another kooky Halloween themed link. This time Simon Bates is peering out from behind a cobweb covered test tube rack filled with assorted bits of pyrex and talking in a weird strangulated voice. It's almost certainly an impression of someone but I have no idea who; Peter Lorre? I'm mildly fascinated by the  hat-wearing guitarist of Blue Zoo. He's worked out a complicated solo-quadrille which involves shuffling backwards and forwards in a vague L-shape on the left hand side of the stage. It seems to bear no relation to anything the rest of the band are doing. Given the number of times he steps out of shot or is masked by the lead singer it also gives the impression it wasn't worked out with the director. At times he's way over on stage left, seven or eight feet from the rest of the group, before heading back towards them. He looks like he's decided to leave the band mid-performance before changing his mind. 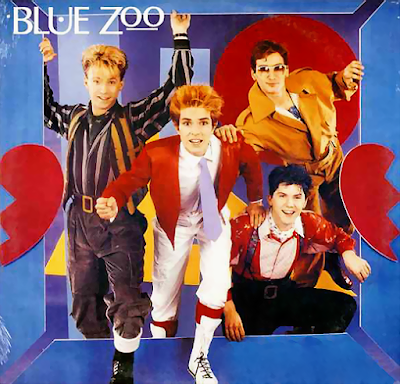 [29] Dionne Warwick: Heartbreaker. Where's Simon Bates? This time he's lying in a coffin wearing fake vampire fangs. (John- I hope he got a double fee for all this ribaldry?) He's holding a wine glass of blood (probably cranberry juice) and manages the mildly difficult task of sitting up without spilling it everywhere. He’s also clutching a large shortbread biscuit heart which he holds up to camera on the line "how would you like to have a real heart [squeezes biscuit until it cracks] breaker?". Unfortunately his hand obscures much of the heart shape and so the effect is lost. Dionne Warwick is above these petty concerns. In fact she's been recorded performing to an empty studio earlier in the day. (John- She is afraid of shortbread biscuits that’s why).


[6] Tears For Fears: Mad World. It's become clear that the entire technical resources of the BBC are being flung at this edition of Top of the Pops. Coffins, sarcophagus, shortbread pastries, and now as if by magic (CSO) Simon Bates appears to fly on a broomstick over a crude paper city skyline. For reasons which will never become clear he's dressed as a red-cloaked genie, and perched on the front of the broomstick is a young lady in a black cat costume. Tears For Fears appear safely on film. They don't want to come into the studio tonight for fear of encountering the mad world they are warning us about.


[21] Melba Moore: Love’s Comin’ At Ya. Excitement. What Halloween thing will Simon Bates be doing now? Will he be dangling from a gibbet? Or walling up a rival in the cellars of Television Centre? Or burying a dead cat in the pet sematary? Oh, he's just standing in the middle of a crowd. That's not very Halloween at all. "Now on Top of the Pops lets be serious and take a look at the charts." I suppose Simon Bates is right. The entire show can't be non-stop fun and enjoyment. The charts are not to be trifled with. Melba Moore appears via a performance repeated from the 14/10/1982 Top of the Pops.


[11] Eddy Grant: I Don’t Wanna Dance. Now Simon Bates is clutching a tiny skull which he throws away with the acid comment, "it's nice to have our Producer back with us." Looks like someone's not happy about Michaell Hurll's extended absence to launch The Late-Late Breakfast Show. Or could it be John Peel's use as second banana on the show which rankles Simon Bates? Eddy Grant's on film.


[1] Culture Club: Do You Really Want To Hurt Me? There's just time for some more clowning around with vampire fangs before we see Culture Club. The crowd briefly attack Boy George with a flurry of balloons before running out of ammo.


[10] Barry Manilow: I Wanna Do It With You. Simon Bates is in a terrible hurry at the end of the programme. It's possible he's trying to inject some energy into one last attempt at zany wackiness (or is it wacky zaniness?) but he gives the impression he's got to be somewhere else urgently. He rattles through his goodnight speech as three audience cheerleaders are forced to bob for apples. Simon Bates final act is to unwisely ram their heads into the water. An unrehearsed move, to judge from the flailing limbs and startled expressions when the cheerleaders surface. (John- Good job they did all surface!) There's time for one last "goodnight" and Simon Bates dashes off before the spluttering cheerleaders have a chance to wipe their faces, take a breath, and remember they are meant to look like they are in a state of permanent fun. Unusually the crowd dancing shots continue right up to the end of Barry Manilow's ghastly song, nearly two minutes past the last credit. The director normally pads out the show a little in case the schedule is under running but here we have almost an additional two minutes of material. Which is just as well because there are a couple of things worth looking out for. The broomstick from earlier lies discarded at the side of the stage; it's on the left when Simon Bates' credit is on screen. The sarcophagus is still up, and next to it is a mysterious metal frame which wasn't there earlier. What could it be?  Whatever it's for, it's not very sturdy as can be seen when in a real breach of health and safety guidelines it falls into the crowd and has to be reassembled. Strangest of all, Simon Bates can be glimpsed in the middle of the audience. He appears to be slapping the back of an audience member who has been over-enthusiastically bobbing for apples. It looks like the original plan for the closing titles was to show the audience taking part in various Halloween games. This explains why the flimsy metal frame looks like it has apples strung from it. however it doesn't explain why Simon Bates was in such a hurry to end the programme. (John- This sounds as if it is simultaneously the best and worst show ever!!)