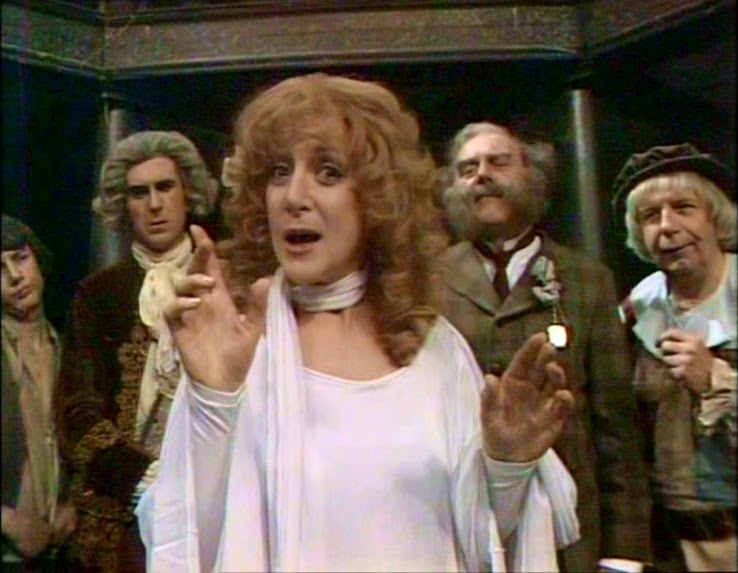 Although The Ghosts of Motley Hall was made as a children’s programme it seemed to attract appreciative viewers of all ages. The reason may have been that the writer Richard Carpenter (affectionately known as ‘Kip’) and director Quentin Lawrence (ditto ‘Q’) as well as we in the cast respected our audience and never ‘played down’ to the younger element as many other TV programmes are inclined to do. We never thought of the series as anything but serious (if somewhat eccentric) drama.  Part of the merit of the programme was indeed in the casting. It would be impossible to think of anyone but that remarkably fine actor Freddie Jones playing Sir George Uproar, and who but Nicholas le Prevost could bring ‘Fanny’… I nearly said so joyously ‘to life’? And Arthur English of course WAS Bodkin. I still wonder at my luck at being cast as The White Lady, a part to die for…. which I suppose in a way did!. We four were the ghosts who couldn’t leave the Hall, but Matt (played by young Sean Flanagan) could, which meant the story lines weren’t altogether confined to the interior set. The estimable Peter Sallis as the nervous yet determined janitor completed the team of regulars, while the guest actors, different ones in each episode, contributed hugely to the quality of the series.


The set itself was ‘permanent’, which meant that while the series was being recorded a studio was set aside for our use only, and with familiarity Motley Hall with its large sombre, dusty hall and cobwebbed staircases became ‘home’. We had enormous fun making the programmes, but what was even more rewarding was that we became a genuine team… perhaps a family, and this trust and intimacy shows on the screen. We would give lines away to each other, as well as crucial moments: Wouldn’t it be better if YOU said that, or did that?  And we were grateful for suggestions from one another, and even criticism. I remember Freddie taking me aside after one of the White Lady’s excessive bouts of hysteria and telling me (as gently as he could) that there was no need to be quite so realistic, as screwing up my face ‘didn’t make The White Lady as attractive as she should always be. Point taken!


In those days before digital techniques etc made special effects commonplace, visual trickery on screen was new and challenging. I’m not technically minded, but it seems in order to obtain these illusions they took the colour green out of the spectrum. (What do you mean WHICH spectrum? THE spectrum. OK?) This meant that anything green wouldn’t be acknowledged by the camera. With me so far? Good. . When we had to appear or disappear, we would be shot against a plain green background, standing on a green cloth, with all the shadows eliminated. Then one camera would cover the scene let’s say in the main hall where you were due to appear, while another would cover you in the green area The two pictures were aligned for perspective and your position in the scene, the director Q would bring up the picture of the hall sans ghost, and then on cue fade the camera up on you… and you would materialize…  with some difficulty. Kip and Q decided we should each of us choose our own method of disappearing, but specified that as a ghostly function it was haphazard and took a lot of effort, which was why we all staggered unsteadily when we arrived anywhere, particularly Fanny, who always managed to land in the most unlikely, and probably most painful of places. I decided that pinching the bridge of my nose as though expecting a huge sneeze would preface the energy needed to fade in or out.


The White Lady was one of the few opportunities I was given to play ‘a heroine’. (Well, you know what I mean!) I loved wearing those flowing white robes, though from time to time they caught me out and tripped me up… quite noticeably in one of the episodes.... and no, you’ll have to find it yourselves. The wig, though not exactly ‘flowing’, added to the femininity of the character, as did the long fingernails, although they became the bane of my life on and off screen.  They had to be glued on each morning at the studio, and were inclined to come off at the slightest pressure, so I had to become adept at avoiding using my fingertips, and ordinary activities like eating and dressing demanded concentration and manual agility. Peeling them off each night began to tell on my own nails, which started to weaken and discolour. I tried leaving the false ones on overnight, but would wake up to find several of them scattered rather painfully inside the bed, while the rest hung on miserably at seriously contorted angles. Nonetheless, as I watch TWL  ebbing and flowing on screen and  gesticulating wildly using those talon-tipped appendages, it’s clear that the suffering was worth it.
I suppose if I had to choose, my favourite episode would be ` Godfrey of  Basingstoke`, with Ian Cuthbertson glorying in the role of the clankingly dull knight. Not only because it was the one episode that revolved around TWL and her singularity, but because it contained one of the most delightful lines Kip Carpenter wrote for her. At one of their meetings after a bout of wild weeping at her lack of identity, she stands up at the long table and wails: The White Lady! THE WHITE LADY! I’m not a ghost… I’m just a description! It makes me smile with pleasure every time I think of it.


So who was The White Lady really? And did she actually know who she was? She spends a great deal of time throughout the series trying to find out, but when it looks likely she might be discovered, she very soon manipulates the situation  in favour of continued anonymity and her own independence. As a matter of fact… and this is just between you and me….. I’m pretty sure she knows exactly who she was, but she ain’t telling. And just between you and me…  I’m pretty sure I know who she was. And I ain’t telling either.
Sheila Steafel 2005 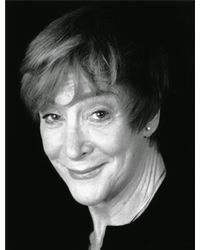 Sheila Staefel (as amended by Sheila herself!)


Try finding out about Sheila Steafel and all sorts turns up. She was born in South Africa and crossed the ocean at the age of sixteen to ‘become a star. And didn’t.’ Ten years later things started to improve, Since then she's been seen in tv series as diverse and decades apart as  Z Cars,   7he Kenny Everett Shows, and The Tenth Kingdom. She sang The Witch in Humperdink’S opera Hansel and Gretel, toured two one woman stage shows at home and abroad Steafel Solo and Steafel Xposed, and more recently a third Victoria Plums.  In 1985/6 she performed plays that Amold Wesker wrote specially for her; Yardsale and Whatever Happened To Betty Lemon? She was married to Harry H Corbett (Steptoe’s son). On stage she played opposite Tom Courtenay in Billy Liar, Warren Mitchell in Jump and Robert Morley in How The Other Half Loves and was acclaimed for her performances as Harpo in A Day In Hollywood, A Night In The Ukraine and Mistress Quickly in the RCS's production of The Merry Wives Of Windsor. She was one of the Frost Report comedy team along with Cleese and the two Ronnies. She's done many radio programmes and plays, and spent seven years in the Radio 4 topical sketch show Week Ending. She has recently concluded a run of Victoria Plums at The New End theatre in Hampstead, described as "A beguiling evening of unique Victorian songs, ditties, poems and moving monologues. One notice read " Fascinating, funny, and sad all at once”. Which, she says, describes her perfectly!