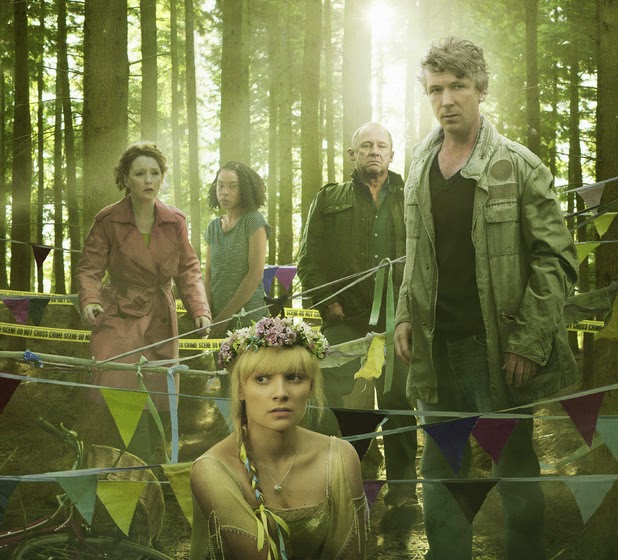 The series was devised and written by Ben Court and Caroline Ip who created ITV’s Whitechapel, an original and at times unsettling show that spliced modern police work with historic gore and generated a sense of the bizarre. Mayday, though it is set in a sunlit, modern town rather than the Victorian environs of London conjours up a similar sense of brooding menace. Regular things like a bicycle, a crown of flowers, a heavy bag or a model of housing development take on an air of mystery. Characters alter noticeably depending on who they deal with in a way that people do but which some tv dramas fail to pick up. The brightly lit locale itself is surprisingly atmospheric and shots of the nearby woods add a supernatural feel to proceedings.
It is implicit from the off that the town is steeped in ancient tradition. May Day here involves a procession through the centre complete with darkly painted Morris men and a May Queen seated on a wagon. This year she is Hattie Sutton and she never turns up. We see her in the opening sequence in her costume cycling past characters who will become suspects in our eyes before the first episode is out but then she is seen no more. The police investigation is viewed peripherally, in fact there is more information gleaned from local police officers than from the investigating detective who has a reassuring smile that doesn’t hide his obvious suspicion of everyone.
Across the first three episodes incidents and allegations build as we watch how characters react to the feeling that someone they know well may be involved. Malcolm Spicer is a businessman whose cherished building development has become mired in local protests in which Hattie was a prominent figure to the extent that is has bankrupted him. Brash from the outset he is played by Peter Firth with all the considerable gravitas he can muster and is easy to suspect especially as he has a knowledge of the woods which the townsfolk have taken it upon themselves to search. His marriage is edgy though his wife Gail has no idea of how deeply in debt they are nor of other more sordid secrets that he carries. Lesley Manville plays Gail’s reactions to these revelations with a jittery fussiness that adds to all the tension.
Then there’s Seth Docker the mentally unstable brother of Steve a character who has already placed himself at the centre of the search for Hattie perhaps because of his estrangement form his own wife and son. Seth taps into the mythical backdrop of the series, with talk of earth spirits and what the woods wants or doesn’t want. “I’ve seen the end of the world” he declares at one point. Realising Seth may become a target for the riding vigilante attitude Steve brings Seth to his own house which seems to make him even more paranoid. Is he just suffering delusions or does he know something? The question develops into the prospect that is actually Steve who might be guilty. Each brother suspects the other and as for us? We’re never quite sure and this is how the serial works leading us here and there in what becomes an increasingly fascinating trail. 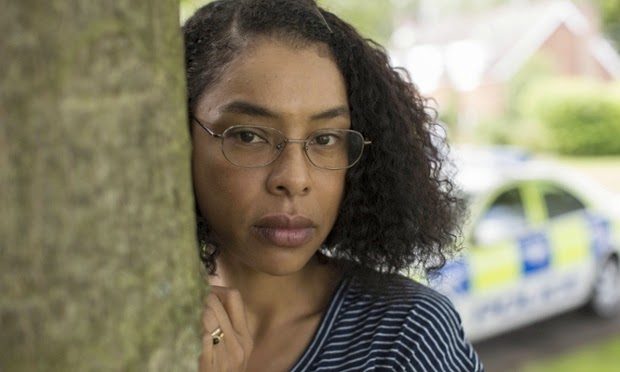 We meet long widowed father Everett Newcombe who is lugging a heavy bag around suspiciously and when his son Linus tries to find out what’s in it he is hit. Everett is played with intensity by Aiden Gillen and as we follow his character he turns out to regularly pick up younger girls whose physical resemblance both to the missing Hattie and his wife is clear. Mind you his son is not exactly a picture of innocence as he seems to use the scenario to get closer to the object of his affections Hattie’s sister Caitlan while hiding secrets of his own. He’s played by Max Fowler with a stare that makes him seem as if could be hiding even more. He’s the nearest the series comes to a main protagonist in the sense that it his route around the events we follow because of his interaction with others.
There’s Fiona Hill a former police officer whose husband Alan is still in the force facing an accusation of using unreasonable force on a female suspect. Sophie Okenedo plays this role with a brittle quality that seems perpetually on the brink of panic but holding it in. She comes to suspect her husband of something but is she imagining things that aren’t there? One scene sees her finding what looks like a part of Hattie’s May Queen costume in the attic but her husband just says its’ a bird’s nest.
Inevitably these plotlines start to bleed into each other with connections and histories between them that start to draw together as the strain of the mystery intensifies.
The intrigue that builds as we follow these stories is matched by the show’s sense of place. An elemental angle- espoused in particular by Seth- is essayed by director Brian Welsh who shoots the surrounding woods with a dramatic flair. There is often a sense of something more lurking especially when the sound mix includes whispering voices whenever the cameras pan around the trees.
Then in episode 4 there are two turns that shift the narrative into top gear. At first we’re led to believe Hattie is still alive after she is seemingly spotted on cctv. The palpable sense of relief the characters feel is then whipped away by the discovery of Hattie’s body, positioned up a tree. From there till the end the pace becomes even more frantic as the town reacts to the discovery.
These last two episodes are really quite masterful managing to keep several concurrent plots stewing with anticipation so that the viewer’s idea of who the murderer is changes every few minutes. It’s all brilliantly edited to throw curveballs and entice us at once. Whereas a lot of serials end disappointingly Mayday ramps up the further it goes and the last group of scenes will surprise on first viewing. It is clever, thrilling, dramatic and also, at times, warm. It would be wrong to give it away but suffice to say the conclusion is in keeping with what we’ve seen containing a wonderful bit of mis-direction and an act committed by Fiona that takes your breath away. How could she? Plus the elemental themes are woven into matters as well. It is so well packaged and completed that even if a second series were contemplated it could not match the pressure cooker of these five episodes.
Needless to say you reach the end of Mayday with renewed appreciation of the cast. Sophie Okenedo ’in particular is peerless as Fiona wrestles with conscience, with the past and present and ultimately where her loyalties lie. It’s an awkward sort of role but she nails it. Aiden Gillen and Max Fowler deliver note perfect performances as the full details of what happened in the past come to light. Gillen’s Everett up till part 5 an unlikable character suddenly draws your sympathy in unexpected ways while Fowler remains utterly   believable however his storyline turns. There’s some superb stuff from Lesley Manville as Gail deals with revelations about her late husband and the loss of all her furniture in some of the scripts’ darkest comedic moments. Leila Mimmack is exceptional in the role of Caitlan portraying the numbness and shock yet showing other sides to the character. Her versatility is evident in the scenes where she also gets to play Hattie in flashback. 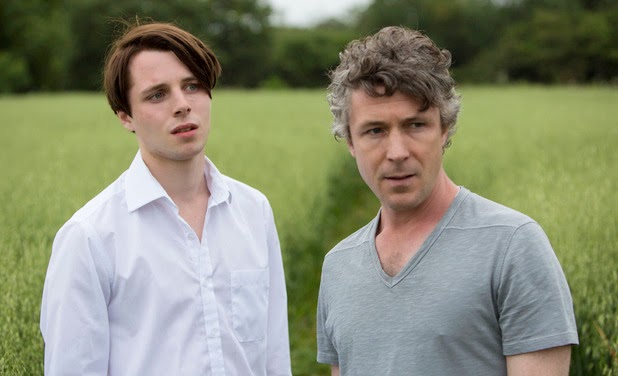 Reviews at the time tended to be fairly critical and it looks as if some viewers never tapped into the pagan side of the town, emphasised from the off and vital to the resolution. I can see why that might occur, some people just dismiss that kind of thing as ridiculous but the script goes out of its way to place the scenario in the context of the history of the place and it is left open whether or not Seth is disturbed or some kind of visionary. It is liable that people who didn’t `get` this may have felt the ending was unsatisfactory but it seems to me that someone both believing in local superstition and also putting their family first is not unbelievable at all. As for the final image, obviously that was Caitlan who had dressed up as her sister mimicking the opening sequence. The inference is that she has retreated into her own world, overcome with shock and grief and believes she can hear Hattie talking to her. Like Seth you have to either believe this is the case or she is delusional but it is all laid out for the viewer to decide how they respond.  As far as I can tell it was never implicitly stated whether the series was supposed to be taken as realism or some sort of fantasy reality. In the extras on the dvd producer Chris Fry talks about the influence of Twin Peaks, which suffered similar nonplussed reactions from some viewers and raves from others.
Criticisms of the acting I find harder to understand - there are some astonishing performances here. To settle at a level that allows for the idea of grief and numbness but also enables a character to communicate and the plot to develop is tricky to achieve but I feel everyone in this cast gives that 110%. Unlike some dramas which have their quieter and/or duller moments, I found Mayday riveting from the first to last scenes whichever storyline was being played out and that owes a lot to the way the cast performed the intriguing script.
Mayday is such a good serial I can’t believe it left less of an impression than Broadchurch. Maybe the decision to show it across one week, an episode a night, played a part allowing little time for people to speculate and debate the way they did in the week between each episode of the ITV series. Perhaps it arrived at a time when two series about a murder in a tight knit community was one too many. It is five episodes long so it doesn’t take too long to watch and if you haven’t you can get it quire cheaply now and it is well worth a look.