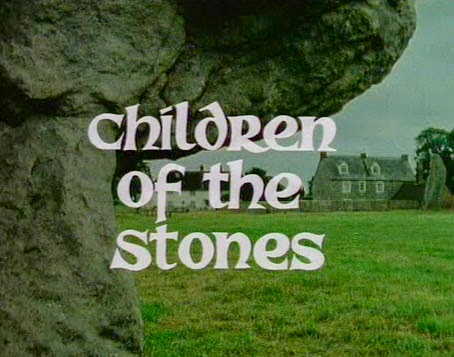 Visually, the series is impressive; the atmosphere conjured up by all the askew camera angles and manic chanting reels you in and the sequences where the villagers are all singing with their mouths permanently open and odd expressions of their faces is just bizarre; I bet they had fun filming it! Save for the rather awkward stop mid episode for ads, the pace rolls along seamlessly; there is barely a wasted moment to be seen and much of the early threat is symbolic or couched in visions that may or may not be real. Director Peter Graham Scott plays brilliantly with what technology was available at the time, utilising wipes and mixes while that soundtrack reaches a crescendo with each moment of impending doom. Yet for all the hints of ancient powers and dark ritual, much of the reasoning is logical and scientific. Worlds away even from the pseudo science of Star Trek or Doctor Who, writers Jeremy Burnham and Trevor Ray have really done their research here and it’s almost a pity when one of those old fashioned computers appears near the end; it’s the only bit that seems fake.
The village of Maybury is a seemingly idyllic place albeit one steeped in history, much of it concerning the ancient stones that ring the village. When scientist Adam Brake and his son Matthew arrive for a three month stay they discover most of the villagers existing in a blissful state of apparent happiness which recent arrivals seem to soon succumb too. The mystery is heightened when both father and son receive electric shocks from the stones and Matthew begins to have visions of the future. The mystery seems to surround Hendricks, the local landowner who appears to have the village in his power.


It’s a great set up for a story and the resulting production lives up to it. The “happy day” mantra and the false joy is effective because it’s underplayed and it plays neatly into the countryside ritual we’ve all experienced wherein those folk seem stuck in a little world of their own. Hendrick’s raison d’etre; the elimination of sin, also raises issues of morality which, considering the intended juvenile audience, is a worthwhile excursion however straight laced it makes the character seem. Is Hendricks really just an exaggerated preacher come to cleanse the village? His tone is messianic at times and we’ve seen those believers’ eyes that Iain Cuthbertson does so well many times in real life. One senses a certain scorn from the writers towards country folk though; the maypole dancing tradition is used as a representation of people finally being absorbed into Maybury and it is tempting to think that messrs Burnham and Ray were getting their own back after a terrible visit to somewhere similar. To their credit though, they do explore every facet of the situation; probing at ideas and concepts – there’s a brilliant conversation in which Hendricks’ role is discussed – is he a magus or a god or what? A side trick maybe, but this attention to detail adds so much to a production already steeped in mystique and brimstone. Another aspect of its appeal may be that the script gives equal weight to both young and old characters. There is no talking down to the kids here, no “and don’t talk to that crazy Dai again” shoutiness from Adam, simply a gleeful exchange of clues as the mystery unravels.


Gareth Thomas excels then in such a milieu; Adam Brake is the archetypal ordinary man thrown into extraordinary circumstances and he convinces far more than he did just a year later in `Blake’s Seven`. Even the hints of a growing friendship and maybe more with museum curator Margaret are noticeable because of the way Thomas plays it coy and reticent when his scientific attitude is bold and curious. Matched against him, Iain Cuthbertson has enormous fun playing Hendricks with slippery guile; he is a loathsomely slick character and when you have a villain like this to kick against, it helps. Peter Demin is the real surprise though; sidestepping kid actors’ usual traps, he makes Matthew Brake a likeable, bubbling and, most important, intelligent teenager a long way from the cardboard acting of many of his mid 70s peers. A pity he never seemed to pursue his acting beyond this really. Freddie Jones has a meaty role too, as a seemingly gibbering tramp who is the only villager to have escaped the programming. A sequence where he seems to have been killed is a genuine shock to watch.


There are a few structural flaws though, the most glaring of which is whether a village of he size we see would really only have 50 odd inhabitants and then there is the unlikely coincidence of three single parents and their offspring all moving into Maybury so closely together. Also, enjoyable though the results are, it is stretching credibility to have a teenage boy discussing complex science and problem rationalisation with his scientist father on an equal level and occasionally one step ahead. Finally, at the climax, just how does Hendricks fail to notice that the usual large pillar of light and whooshing noise has failed to happen?


Nevertheless, `Children of the Stones` delivers on almost all fronts and is still saturated in atmosphere today; watch it now on dvd and have a happy day…….