Up-words features the best of the articles from This way up when it was published as a print fanzine from 2002- 2010.
Shades of Blue
featuring The Story of Sky /Tim Worthington & Back in the Sky Life / Ben Finlay
April 2006
NB Since these articles were written Sky has been released in DVD. 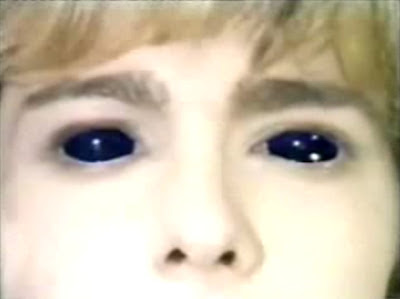 The Story of Sky

by Tim Worthington (with additional material by John Connors)
Bob Baker and Dave Martin were highly imaginative and sorely underrated writers; had they diversified into books, films and radio, perhaps I'd even regard them as highly as I do Nigel Kneale. As well as several ambitious Doctor Who scripts, there's a string of other excellent series they worked on for HTV in the 1970's which few know about and even fewer have seen. Among these were the daring retelling of Arthurian legend Arthur of the Britons which stripped the fabled king of all his magical powers and even his right to the throne, the weird allegory with fairytale overtones King of the Castle which was actually moved out of a children’s' slot because it was too disturbing, and of course Sky. First shown in 1975, Sky is in many respects very different to the shows it is usually bracketed with by telefantasy critics and their incomprehensible compulsion to 'categorise' everything (what profits it a man to know that Stargazy on Zummerdown is a bit like The Old Men at the Zoo? And more to the point, who cares?). Sky has no Ace of Wands style over-the-top mysticism, no Tomorrow People fashion flashy futurism, and definitely no Freewheelers-like megalomaniacs with entire fleets of hot air balloons carrying poison gas. There is in fact little bar pure disturbing eeriness, not least due to the fact that the title character seems to perform acts of both good and evil and not really cares about the outcome of either. He is a clear offshoot of the Solonians from Baker and Martin's Doctor Who script The Mutants' but unlike those particular 'beautiful people' he does not necessarily lead a planet to a brighter future. In fact, he almost manages to destroy one without doing anything at all.


The plot is extremely complicated, but I'll have a go at summarising it here. Basically, Sky is an unidentified alien entity sent to Earth on an undisclosed mission. It is not even certain whether he had existed in some way before this time, or if he had been brought into existence specifically for this task. His arrival on the planet is at the wrong time, and a very different planet to the one he expected treats him as it would bacteria and uses its 'immune system' (the elements, in other words) to try and drive him away. When he’s buried alive by the Earth his telepathic cries for help are heard by some country teenagers who eventually locate and rescue him. Sky them ominously begs them to "take me away from living things", and is surprised by both their lack of telepathic capability and their failure to 'recognise' him. He realises that he has arrived during the 'decline' rather than the 'chaos', and begins an urgent search for The Juganet ("The Juganet is a circle. The circle is a machine. The machine is a crossover point. The point is a paramagnetic intersection", he declares provoking only bemusement from his new helpers) to prevent permanent damage being done by his dislocation. While the youths and Sky search for the mysterious item, the Earth calls upon The Green Man (a nature spirit from genuine folklore) to ensure that the 'invader' departs this time; a being called Ambrose Goodchild is created from wind and leaves, and instructed to deal with Sky.
After seeking him out in human form, Goodchild infects Sky with a quick-growing fungus and he is only saved by the arrival of the youngsters. Realising there is no time to lose, the quartet set about finding the Juganet as quickly as possible. After searching at Glastonbury and Avebury, they finally find what they are seeking at Stonehenge. Goodchild's work is done and he disappears into nothingness, but something goes wrong and it is Arby (one of the teenagers) who is flung into the future instead of Sky. He finds himself in a strange Wicker Man-style community, where he is condemned to be burnt as an offering to please the gods. Sky, who had been sent to somehow guide the lives of these simple futuristic peasants in a different direction, arrives just in time to save his friend and erases the youngster’s memories of the whole encounter, but intimates that he will always remember them. Powerful stuff, full of deep messages about the power of nature and following false idols, and certainly light years away from the likes of Hatty Town and Magpie which shared its ITV children’s' slot. Producer Patrick Dromgoole later said of the show’s unusual approach; “What we were trying to say to the children was their normal definition of good and bad was not going to work because they were suddenly confronting one of the great mysteries of the universe and a very simple definition wasn’t available….something of that size and that importance…doesn’t fall very easily into the usual definitions of a `goodie` or a `baddie`.”  He likened the scenario to what would happen if a person were to really encounter one of the major religious figures; “(Sky) was potentially dangerous to the country kids who met him and tried to sort of make a pet out of him and own him and at the same time follow him and adore him without really understanding him.”
After filming in late 1974, the seven-part serial was transmitted in April and May 1975. Both producer Leonard White and executive producer Patrick Dromgoole are now highly regarded in the broadcasting industry, and on the strength of the acting it is amazing to think that none of the cast really went on to greater things (in particular seventeen-year-old Marc Harrison is astoundingly convincing in the title role). The sinister atmosphere is boosted by the weird musical score, using conventional instruments like harpsichord and cello but verging on white noise, almost like an acoustic version of the Texas Chainsaw Massacre soundtrack. Baker and Martin drew on their Doctor Who experiences by persuading HTV to utilise CSO (whoops, sorry, 'chromakey') in the serial, even though the company's use of the system had previously been restricted to news broadcasts. The most significant adoption of this process was one that underlined the whole alien nature of the title character. His eyes were bright blue, but through the magic of CSO they could change colour according to his emotions (and in close-up, displayed starscapes and rolling clouds).
The series proved a success and a sequel was mooted but never happened and as the seven episodes were only show the once, a mystique grew up about them over the years. Various people claimed to have copies on video but never seemed able to back up their claims with the actual item and thus Sky became a `classic`. Its only been in the last few years that dvd copies taken from the original master tapes (complete with countdown clocks) have surfaced from somewhere just as obscure as Sky’s own origins and the chance to view the series again or, in most cases, for the first time has been made possible.
As if to underscore the series’ refusal to pander to the expected, it seems it’s original followers in the mid 70s were far from the geeks who followed other series of this nature as it was reported that graffiti declaring `Sky Lives` appeared in London shortly after the series was broadcast. Of course, this might just have been Bob and Dave. 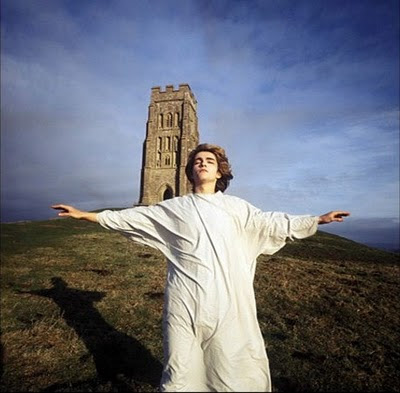 Back in the Sky Life 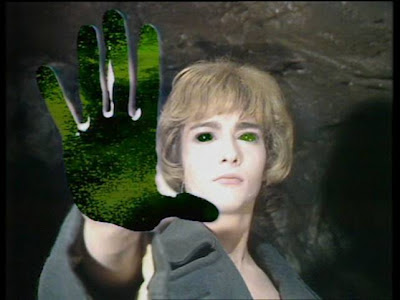 q  Producer Patrick Dromgoole later said about the show, “Sky certainly had a hell of an impact; a very brilliant piece of writing”
q  Marc Harrison said he agreed with the environmental and ecological themes in the show.
q  The casting originally called for someone with blond hair and blue eyes. Dark haired brown eyed Marc got the part after impressing at auditions.
q  His reward was to have his hair dyed, all visible body hair removed, huge big contact lenses stuck in his eyes, a synthesiser pack attached to alter his voice and at times a harness to help the character move.  He spent his first day of filming in late October 1974 lying on the ground in the cold, virtually naked and covered in leaves and wisps of cotton wool.
q  According to Patrick Dromgoole, Sky’s blue eyes were his idea, inspired by the chromakey effect using blue screens, which ITV were using a lot at that time.
q  Richard Speight who played Roy is the son of writer Johnny Speight who created Alf Garnett.
q  Robert Eddison was in his late sixties when he filmed the series but as far as we know he did his own cloak swishing. An actor with a huge stage reputation he took the part because he was one of Patrick Dromgoole’s old mates. He was in Indiana Jones and the Last Crusade you know.
q  The series really did film on Stonehenge, which these days you’re not allowed to do due the wear and tear of visitors’ on the stones.
q  Twenty years after filming, Marc Harrison said of the show, “If it ever comes up in conversation people my age say `Wow, that’s extraordinary`. They don’t even remember it was me. It was great fun. Each day was a bit of an adventure because technically it was very demanding.” Years later when he was in hospital a cleaning lady said to him, “You’re Sky aren’t you dear?”
Posted by John Connors at 19:14