Prometheus looks good but does not live up to the promise of the trailers...
The problem with having the best trailers of the year is that expectations for Prometheus have risen very high indeed. Inevitably the end result disappoints being no more or less than a competent enough blockbuster. It’s packed with incident, jeopardy and a couple of difficult to watch not for the squeamish sequences. It has its exciting moments for sure. If it were another film that would probably be enough. 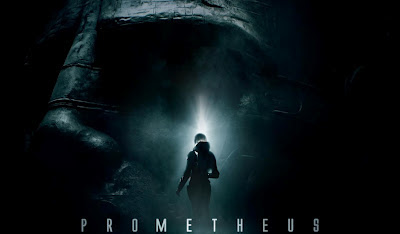 ﻿
The one thing Prometheus most definitely is not is the profound and challenging film that those trailers suggest. What intellectual heft it possesses is delivered with little of the passion you might expect from a couple of pioneering scientists and dispensed with during the first half. Any suggestion beforehand that the script offers an intriguing commentary on life, existence, evolution or anything much never comes to bear. In fact, the dialogue is so pedestrian it’s almost as if the writers can’t wait to get to the action.
Even that would be acceptable enough if the characters were interesting or different but we learn so little about them that we don’t really care what happens. During the last third they have become little more than the fodder of an average horror movie, picked off in gory or unusual ways. One scene has a character declare an act of loyal self sacrifice but it is written and delivered so perfunctorily – and the character has barely said a word to this point – that all you’re wondering is who this bloke is.
The film’s one big interesting revelation about humanity- which should be jaw dropping drama - is unpeeled too soon and without the awe you would expect from those discovering it. It’s one thing being a detached scientist but this lot seem to go about their business in a catatonic state for the most part.  The most `human` character we meet ironically enough is a robot called David played with an edgy presence by Michael Fassbender. There is a moment where he stands amidst a three dimensional star map gazing at the Earth that is perhaps the film’s finest visual and a pointer perhaps to the way other scenes might have been played. The two most interesting members of the crew don’t make it to the halfway mark. As the two scientists leading the expedition Noomi Rapace and Logan Marshall Green seem uncomfortable though whether this is due to the script or mis-casting isn’t clear. 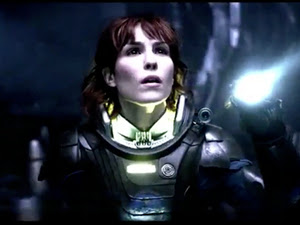 The plot tries to pack in too much while ignoring the important issues; we get token banter rather than real characterisation and nobody seems aware either of the importance or the risk of what is happening. Some of the plot twists are too obvious before they are actually mentioned while other things are just implausible.  It is certainly difficult to believe, for example, that anyone would sign for an expedition of this nature without knowing what it was! As for the connection with the original Alien film we end up learning how the `space jockey` or, as referred to here the `engineers` technology works but it seems we have to wait for a sequel to find out anything more about them.
Of course, this is Ridley Scott so the palette looks excellent and he certainly delivers with his usual visual panache, especially in the opening sequence, in a terrific scene when the crew are trying to out-run a ferocious storm and inside the alien planet with its Giger designs. There’s much fun to be had spotting the clues that lead to the original film and this is the area where the script is most plausible. Yet it is not clear what Prometheus is about other than kick starting an alternative franchise.
Posted by John Connors at 19:13