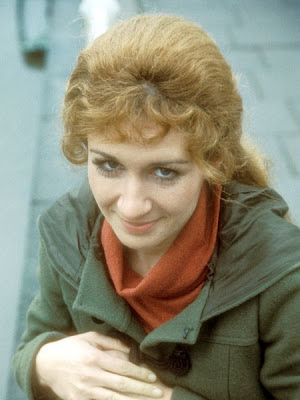 Caroline John got rather an unfortunate deal from Doctor Who. She was already cast as Liz Shaw when Barry Letts took over as producer and he really wanted a different sort of assistant.  Liz’s slightly superior, cynical, academic approach was well played by Caroline in` Spearhead from Space` but the character was perhaps not the most suited to be paired with Jon Pertwee’s establishment baiting Doctor. Liz was very clever but initially dismissive of aliens when first briefed by the Brigadier, a scene that highlights the subtle humour that Caroline’s performances often encompassed.
Yet she did strike an intellectual rapport with the Doctor during their four stories together and Liz was someone the writers were able to use intelligently and pro actively.  The Doctor knew he could rely on her and the viewer felt as safe in her company as they did with him. In the end her outlook overlapped too much with the Doctor’s and Caroline’s pregnancy meant she would not have been able to stay even if Letts had wanted her to. She did appear in a quartet of highly regarded stories though, meeting the Autons and SIlurians plus she got to drive Bessie, despite not having a driving licence in real life! Not to mention playing a parallel version of Liz Shaw in Inferno. The Ambassadors of Death is still awaiting release on dvd.
She returned to the role of Liz Shaw briefly in `The Five Doctors` and subsequently in a series of amateur video dramas called PROBE where the character smoked a pipe! She also played Liz in some Big Finish audio plays as well as a different role in Dust Breeding. These later appearances made better use of Caroline’s skills showing  the character actor she really was. She also appeared at conventions form time to time and developed an amusing and very well played performance piece as a cleaner in the research centre where `The Silurians` took place.
Caroline John was born in October 1940 in York and attended the Central School of Speech and Drama before working for both the Royal Shakespeare Company and the National Theatre in a range of productions.  Amongst her television appearances were roles in Silent Witness, Doctors, The Choir, Dangerfield, House of Elliot, Harry Enfield’s Television Programme, Poirot, Wish Me Luck, A Very British Coup, The Power Game and Z Cars. She played opposite Tom Baker in a 1982 adaptation of Hound of the Baskervilles.  She was married to Geoffrey Beevers (wih whom she did several radio plays and an episode of Poirot) with three children. She passed away on 5th June though her death was not announced until today.
Posted by John Connors at 19:19