Sophocles’ classic play Antigone at the National Theatre
Reviews of this adaptation of Sophocles’ classic play have been mixed, though at least some of the criticism has been levelled at Don Taylor whose version this is. To someone without any knowledge of the play - or indeed of Sophocles - I have to agree that the National Theatre’s Antigone sits awkwardly at times. Mind you with Greece very much in our minds at the moment let’s hope they don’t go looking for answers here! 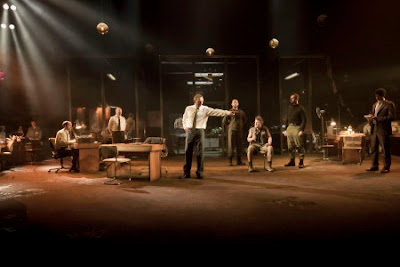 It’s the fifth Century and we join the action in the aftermath of a war in which Thebes has been defended successfully and Creon is now King. Two of his nephews have been killed- one Eteocles is given a state funeral with all the trimmings as he helped defend the city. His brother Polynices is, Creon decrees, to be left where he fell without a burial of any kind. His sister Antigone defies this edict but is caught by Creon’s soldiers. The crux of the play is the divide between familial and state affairs because Antigone’s actions are driven by her love of her brother and yet she is also due to marry Haemon, Creon’s son.
One thing I noticed was how the play appears to paint Creon as very much the villain of the piece until it is almost too late. When I subsequently read other reviews, they make the point that many of the subtleties of the original were lost by Taylor when he adapted it. I’m not so sure this is as cut and dried; in his later scenes we do discover what is pulling Creon apart- he fears being seen as a weak leader more than he will risk changing his mind for the benefit of his son. This invites the audience to sympathise with him for the first time but then, in a wash of blood, the play overcompensates to the point where all debate is lost. This at least can hardly be blamed on Taylor.
What parallels we might draw with contemporary issues stem from Creon’s inner conscience and it is true that it arrives a little late for us to truly believe in it. When things are going well, he has no doubts. As you might expect talk of the Gods and of prophesy date the text a lot yet there is something to be gained from sticking with it; how many of today’s dictators and terrorists quote divine inspiration? Yet this bloodbath seems so melodramatic that it washes away the intelligence of what has gone before and even an actor as sure as Christopher Eccleston struggles to encompass the emotions because, really such matters are beyond words.
Antigone herself is a catalyst rather than a fully fledged participant and it’s a shame Jodie Whittaker gets comparatively little stage time except for a trio of key scenes. I do feel that the narrative is balanced in favour of Creon in particular and men in general though this may just be old Sophocles and the times he lived in.
The most absorbing scenes are one to one dialogues Creon has. There’s  a soldier – played amusingly by Luke Norris- who witnesses the `crime` and yet spends a lot of time denying he had anything to do with it. Then there’s an angry dialogue with Antigone herself and also a wittily played scene where Haemon tries to cajole his father into changing his mind. Finally when the prophet Teiresias arrives with doom laden warnings, we witness the play’s strongest scene of all. Christopher Eccleston excels in this scenes riffing off the other actors.
The staging is Cold War style underground bunker with the impression of time passing conveyed by people suddenly slipping into slow motion, a very effective visual device. There is a feeling that the other characters could do more and that the arguments seem truncated but there is still a lot in a compact 95 minute long production to enjoy.
Posted by John Connors at 16:23