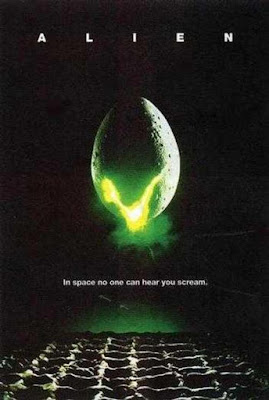 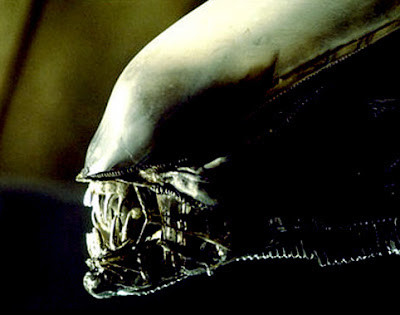 Ridley Scott always maintains that the film succeeds best on a purely visceral level.  And it is true that, in any diluted analysis, the film is an effective ‘haunted house’ ride of terror where the director plays with our expectations of the genre as to which of the next ‘little Indians’ will die next.  We, as the audience, are always put in the place of the individual about to die.  Yet Alien is suffused with several themes and subtexts that offer rich pickings on repeated viewings. In the depiction of the crew, we are presented with recognisable class systems and examples of power politics.  Parker and Brett, as the ‘oily rags’ of engineering, represent the underclass of blue-collar workers socially at odds with the officer faction of the rest of Nostromo’s crew.  Female gender politics are also examined, principally through Ripley’s zealous defence of her professional standing in a male-oriented world.  Unlike her fellow XY chromosome colleague Lambert, Ripley manages to remain authoritative, resourceful and feminine throughout the film.  And it is a testament to Scott’s integrity as director that, even when Ripley is stripped to the level of voyeuristic eye-candy, the camera enhances her sexual and spiritual strengths to equal proportions.
No true analysis of Alien’s themes can ignore the powerful Freudian imagery of the Alien itself.  Indeed, both the creature’s principal and eventual forms are suggestive of male sex symbolism.  Most notoriously, the adult form has a distinctly phallic-shaped head whose penetrative jaws are caked in a sperm-like drool.  Meanwhile, the face-hugger’s violent and non-consensual invasion of its victim represents a form of oral rape - with the consequential impregnation of a malignant ‘child’ in Kane symbolising latent male fears of child-birth.  The ‘oral rape’ metaphor is reiterated in Ash’s visually-bizarre suffocation attempt on Ripley.  That he perpetrates it with a rolled-up porn magazine - itself a symbol of male rape fantasy - while surrounded by similarly titillating pictures only throws the parallel into stark relief.
The twin symbolism of rape and the Alien is again evident in the death of Lambert.  The creature’s slow, seductive entrapment of her - along with Lambert’s own paralysed submission and pseudo-orgasmic hyperventilating - lend the scene a voyeuristic sensibility from which the camera seems compelled to move away.  And the handheld shot of Ripley’s desperate attempt to reach her colleague, overlaid with the soundtrack of Lambert’s death shriek, makes this one of the most disturbing images of the whole film. In short, the true subtext of Alien is that the familiarity of peoples' lives breeds apathy and contempt.  Against this comes the realisation that true horror comes not from spiritual decay within, but from unholy terror without.  It is this fear of the unknown and the need to keep it outside that is the fundamental theme running throughout the film.  For it is when the metaphorical terrors of outside become the literal horrors of within - quite literally for Kane, who is a victim of the horror inside himself - that the screaming truly begins.
Viewed as a template much imitated but rarely equalled, Alien is a model example of simple, white-knuckle film-making.  It is testament to its ability to hold an audience’s attention that the last seventeen minutes of the film have no dialogue whatsoever.  And so successful was its format that the original film inevitably echoes through each of its increasingly-inferior sequels.  While Aliens is touted as one of the best sequels in modern cinema, even its greatest supporters concede that the film’s sacrifice of Alien invincibility at the altar of gung-ho action has a detrimental effect on the sequel’s audience-stranglehold.  As a reaction to this, Alien 3’s attempt to re-establish the single-Alien threat fell flat on listless characterisation, despite impressive visual and thematic flourishes.  And by Alien Resurrection the run-and-fight pattern of the films had become pedestrian and desperately familiar to long-term viewers. ‘A survivor, unclouded by conscience, remorse or delusions of morality’, Ash eulogised of the alien.  And his description could be equally ascribed to the original film’s ongoing popularity.  What draws an audience to this masterpiece nearly a quarter of a century after its first release is as simple as the film’s mandate to induce terror itself. Like the titular star, Alien is admired for its purity.
Posted by John Connors at 19:14