Cartier
by Oliver Wake
April 2004 (amended March 2012)
Rudolph Cartier was one of Britain’s greatest and most innovative television producers and directors. The fact that his name is not more widely known reflects the ephemeral nature of television, particularly in the pre-home recording and DVD age, rather than the quality of his work. 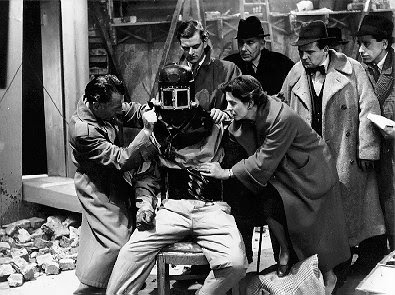 Born Rudolph Kascer in Vienna in 1904 to Jewish parents, he modified his name to the nearest French equivalent in the 1930s after fleeing the Nazis. He had previously studied drama under Max Reinhart and had the beginnings of a promising career as a writer and director in the German film industry before the rise of Nazism forced him out. His parents stayed behind in Austria and perished in the holocaust.
Cartier settled in London in 1935 but made regular visits to Europe to work on films. In 1939 he co-wrote the early BBC television play Rehearsal for Drama and another only failed to be produced because of the outbreak of the Second World War. Due to the war, he was interned as an ‘enemy alien’ in 1940, but was soon released on health grounds. His internment seems particularly unjust given his refugee status and staunch ideological opposition to Nazism and other tyrannies. Later, in 1954, he spoke of his vastly controversial television version of George Orwell’s Nineteen Eighty-Four as a warning “against totalitarianism in all its forms such as Fascism, Nazism, Communism or McCarthyism.”
His ideological stance had been apparent much earlier. During the war he produced the anti-Nazi play Black Racket and attempted to get a film version of Fontamara, Ignazio Silone’s indictment of Italian Fascism, off the ground. He was anxious to put himself at the disposal of the country and offered to work on propaganda films. He was not taken up on this, and his lack of war-work counted against him when he made his first application for naturalisation.
After the war, Cartier worked on minor British films before joining BBC television as a drama producer in the early-1950s. He started as a freelancer but was taken onto the staff after his first few productions. In those days, drama producers also directed their productions and this gave Cartier the creative freedom he would thrive on.
In the austere post-war, pre-ITV years of television, drama was live, small-scale and studio-bound. Cartier challenged the pre-conceived notions that this was all the still-young medium could aspire to, producing large-scale and ambitious plays which belied the limited budgetary and technical resources available. Although his early dramas were still transmitted live, he employed trick photography and used pre-filmed inserts in more imaginative ways than his contemporaries to give the illusion that his stories played out across a large canvas.
Although unremarkable by today’s standards, Cartier’s decision – against BBC advice – to take a film crew and actor Peter Cushing into the Swiss Alps to shoot sequences for the 1955 yeti mystery The Creature, at a time when drama productions rarely left the studio, let alone the country, is testament to his bold vision. With the support of an indulgent boss in the form of Michael Barry, who shared his ambitions for the medium, Cartier spent much of the 1950s pushing and expanding the boundaries of British television drama.
Inevitably, much of Cartier’s drama was based on BBC staples: classic plays and novels or recent West End and Broadway successes. Yet he also introduced numerous more esoteric contemporary European authors into the otherwise almost exclusively Anglo-American repertoire, producing plays by Fritz Hochwälder, Carl Zuckmayer and Ugo Betti amongst others. Cartier was keen to encourage the art of writing original drama for television, and had particular success working in collaboration with BBC staff-writer Nigel Kneale, whose 1950s trilogy of Quatermass science-fiction thriller serials famously gripped the nation. Kneale admitted that they would have amounted to little in another producer’s hands. As well as plays and serials, Cartier produced some of the earliest television operas, and made them popular too.
When Sydney Newman took over as the BBC’s head of television drama in the early-1960s, he separated the roles of producer and director. In this new environment, Cartier worked as director only and his lack of enthusiasm for assignments such as episodes of Z-Cars was apparent. Even so, he made a number of fascinating dramas during the decade, including a lavish version of Anna Karenina and bleak nuclear war play Level Seven.
Cartier turned his attention to recent history, with the early drama-documentary Lee Oswald – Assassin in 1966. He also made a number of Second World War dramas which were uncompromising in their portrayal of Nazi crimes but also gave a German perspective on the war which was exceedingly rare in Britain at that time. Crucially, his work depicted the seldom-acknowledged existence of German resistance to Nazism. This was perhaps most obvious in The July Plot, which dramatised the 1944 conspiracy of German officers to assassinate Hitler.
Many of Cartier’s most impressive dramas of the 1960s were about oppression and injustice, themes with which he was preoccupied. Amongst these were The Fanatics, a true story of religious persecution in eighteenth-century France, and The Burning Bush, which dealt with the blood libel against the Jews. Dr Korczak and the Children, an uncharacteristically expressionistic play about the deportation of Warsaw’s orphans to the gas chambers in 1942, is one of the most compelling hours of television I have ever seen.
Cartier retired in the late-1970s, still a BBC staffer after joining the Corporation over twenty years previously. He hated commercial television and resisted the lure of the BBC’s brasher rival, but did work intermittently on the continent throughout this time. In a double blow to television, when he died in 1994 it was on the same day as Dennis Potter.
Sadly, much of Cartier’s work is missing from the BBC archive. Many of his productions were either never recorded from their live transmissions or when pre-recorded had their master copies later ‘junked’ by the Corporation, as was normal in all areas of programming during the period of Cartier’s career. This dearth of archive material is another reason for Cartier’s undeserved obscurity.
Although infrequently recognised today, Cartier’s body of work played an important role in redefining the boundaries of television drama production in the medium’s early days and did much to open it up to new voices and perspectives.
Posted by John Connors at 19:11