Up-words features the best of the articles from This way up when it was published as a print fanzine from 2002- 2010.
Messianic / Sean Alexander / July 2004


The phrase ‘high concept’ is one much bandied about by television executives.  But in these days of formulaic dramas, populated by seemingly endless casts of former soap stars, the reality is only rarely glimpsed.  One such occasion was Russell T. Davies’ 2003 drama The Second Coming.  Davies, previously most renowned for controversial gay-drama Queer as Folk, is perhaps more known now as the man responsible for resurrecting Doctor Who next year.  And as a foretaste to what devotees of the Time Lord can expect, The Second Coming is an intriguing glimpse at a path the new show could take.  Principally, there is new Doctor Christopher Eccleston’s unofficial audition for the role; all manic energy and other-worldly presence.  But perhaps what whets Who fans’ appetite most is the customary grittiness Davies’ writing brings. 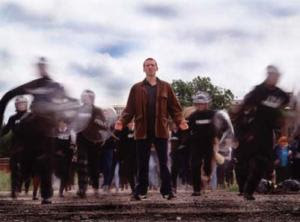 ﻿
So just how do Eccleston and Davies go about translating the fantastical concept of a modern-day Messiah for a contemporary audience?  Simply put, and despite its ultimate pretensions towards a global scale, The Second Coming takes place against an everyday, domestic landscape of smoky pubs and terraced houses.  It tells the story of a closely-knit group of friends who we first see on a typical night out in one of Manchester’s numerous night-spots.  Marking the recent divorce of long-term mate Judith Roach with a more-than-friendly kiss, video-shop worker Stephen Baxter has a revelation that he is the Son of God.  Disappearing for forty delirious days on Saddleworth Moor, he returns intent on beginning his divine work as the new Messiah.  Proving his credentials by turning night into day at Maine Road stadium, a frenzied media and terrified authorities react by treating Baxter as some kind of security hazard.  Forced to take refuge at the local police station, he appears before a massed throng to deliver his sermon: Mankind has lost its moral responsibility amidst the scientific and cultural strides taken these past two thousand years.  To get it back, a Third Testament will be written, this time by the people, in five days as a basis for how they will live their lives from now on.
But if Baxter’s existence as the Son of God proves anything, it is that if ultimate good exists then so must ultimate evil.  And malign forces are swiftly alerted to Baxter’s presence.  These agents of Satan, in the form of certain strategically-placed police officers and lonely citizens like Johnny Tyler, begin to make insidious and violent attempts to usurp his power.  And Baxter is forced to once again demonstrate his divine powers, containing the explosion of a terrorist bomb aimed at him and his ‘disciple’ friends.  As the day of reckoning grows near, further attempts are made to separate Stephen from his acolytes.  All while thousands upon thousands of ‘Third Testaments’ are sent to his police hideout.  And then the revelation: if there is no third testament, then Judgment Day will be passed on mankind; Baxter’s prophetic powers predicting only Armageddon and Death.  Unbeknown to him, his prophecy is transmitted worldwide by Satan‘s agents and chaos and panic grip the streets of Manchester…and the world at large.
As civil unrest grows out of control, Stephen’s supportive links begin to break down.  His father Frank, ostracised and egged-on by a Devil-acting police constable, pulls a gun on his former son; shooting dead one of Baxter’s disciples, Pete, in the process.  Meanwhile Fiona, another of Stephen’s friends, becomes desperately unhinged by the new Messiah’s prophetic ramblings, taking the extreme step of trying to kill both herself and her children to escape Judgment Day.  As Johnny Tyler, a former blind date of Judith’s, reveals to her the Devil’s plans for the Son of God, Judith concludes that the Third Testament and Judgment Day are one and the same.  And this realisation forces her to take the ultimate step in divine intervention…
The Second Coming tells a tight and tense version of the oldest story of all: the return of God to Earth to deliver his people to salvation.  But, as a self-confessed atheist, Davies’ script takes a characteristically controversial and novel approach to the Messiah’s place in the 21st Century.  Stephen Baxter’s mission is not to save the world from despair with a click of his fingers; it is to shake it from the state of arrogant apathy it has reached at the turn of the Millennium.  This is a flawed messiah, in possession of all the quirks and weaknesses inherent of an everyday man.  For him, such moments of divinity are analogous to the downloading of huge amounts of information into his brain; as though such knowledge and power are too much even for the son of God.  All that Stephen knows is that Man, having achieved the technological position of Godhood, lacks the morality to go with such status and is ultimately doomed should it not change this state of affairs. 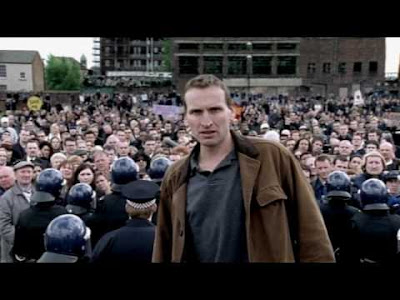 The Second Coming is blessed with a uniformly excellent and eclectic cast.  In the lead role of Stephen Baxter, Christopher Eccleston gives a typically multi-layered and emotional performance.  And, for an actor often overburdened with the label ‘tortured’, provides some surprisingly light moments of relief from the story’s understandably cataclysmic tone.  Who fans will be particularly amused by a prescient scene of the Son of God playing mischievously with some adoring acolytes - an omen for Eccleston’s future brushes with fandom perhaps?  Elsewhere, his performance is characteristically intense and unpredictable, as befitting an actor whose reputation for gritty and realistic drama is well known.  Perhaps his biggest achievement here is to maintain Stephen Baxter’s character as a slightly geeky, ordinary bloke despite his journey towards Messiah-Dom.  The result is that, as an audience, we share Stephen’s initial joy at rediscovering the physical emotions of life, while later suffering his impotent despair as Judgment Day approaches.
Special mention should also be made for Lesley Sharp and Mark Benton.  As Judith, Sharp has arguably as pivotal a role as the new Messiah himself, filling the Biblical shoes of Doubting Thomas, Mary Magdalene and Judas Iscariot accordingly.  Indeed, the story of The Second Coming is as much Judith’s journey as anyone else’s.  From sceptic, via believer to deliverer, Judith is the emotional core of the drama, even providing the climactic and controversial solution to its central riddle.  Meanwhile, Mark Benton is a revelation as ‘lost soul’ Johnny Tyler, whose bland and blubbery exterior conceals a sinister misogyny that exemplifies the ‘lazy evil’ inherent of the Devil’s agents.
Speaking of Judith, it is important to note that the drama works very well on one level as a doomed love story between her and Stephen.  From the opening scene - with The Kinks’ ‘Girl, you really got me’ playing in the background - their tender, awkward and ultimately tragic love for one another is beautifully underplayed by the leads.  As Judith notes, ‘We never stood a chance, did we?’, and their relationship - not least of which her defilement of the ’Virgin God’ - reinforces the idea that Stephen’s destiny is cursed the moment his Messiah-Dom is revealed.  (And, for the Who fans watching, how apt is it that Stephen knows who he is after kissing a woman for the first time; somewhat like the Eighth Doctor gets his memory back after kissing Grace).
But it is in its preoccupation with its central themes that The Second Coming scores most highly.  As Stephen Baxter warns the people on his first address - ‘If you want the position of God, then take the responsibility’ - The Second Coming takes a long, hard look at the place of religion and faith in a modern world.  Its final solution seems to suggest that such concepts are as straight-jacketing as they are helpful.  And in examining some of the other Christian concepts of morality, Davies suggests that Mankind has for too long been using an out-of-date manual for how to lead its lives.  On the somewhat skewed viewpoint of homosexuality Davies, unsurprisingly, has more reason than most to take the Bible to task.  Indeed such intolerance, as with much Bible teaching, is proved to be as a result of the original doctrine mutating beyond a recognisable form.  But it is not just towards such bigoted ideals that Davies points his polemical pen; Fiona’s descent into religious extremism highlights how enlightenment can be as destructive as it is positive.  And her suicidal attempt to reach paradise has much resonance in a post-Waco world.
The conclusions reached by The Second Coming inevitably gain it most notoriety.  And perhaps most shocking of all are how obviously clear these conclusions are.  As the one-eyed person in this particular kingdom of the blind, it is Judith who realises that the seemingly inevitable slide to Judgment Day will not be solved by any of the countless thousands of Third Testaments sent from around the world.  The reality is that there is no Third Testament; at least not in the manner of the previous two.  The impending clash of Judgment Day and the drafting of a new Testament lead her to conclude that Judgment Day is the Third Testament.  The solution was there all along in Stephen’s inaugural speech as Messiah: Mankind has to take responsibility for its own Godhood status. And the only way to do that is to destroy all conceptions of God and religion and start all over again.
So the death of God is the Third testament.  And, if God is already here on earth, then he must by definition die too.  When Judith accepts this, and convinces Stephen to accept it too, mankind is free to take responsibility for its own actions.  For without God, people will be forced to look to each other for answers; and without Heaven and an after-life, people will be forced to make something of their lives.  Yet, despite the seemingly cathartic nature of this conclusion, the end sequences set several years later raise doubt that such conclusions are ever so cut-and-dried.  And that it may be better to live with the illusion of deliverance after all.  Interestingly, Russell T. Davies’ first draft ended with Stephen Baxter resurrected, living the life of an ordinary married man with Judith.  And it was only when fellow scribe Paul Abbott pointed out the ‘cheat’ such an ending would make of its conclusions that the existing one was chosen.  We can only be grateful to Abbott for his intervention.  In a television landscape where such concepts as ‘unhappy endings’ are frowned upon, it is this emphasis on integrity above convention that provides The Second Coming with its greatest testament.  And one of the best dramas of recent years the only ending it deserves…
Posted by John Connors at 19:13