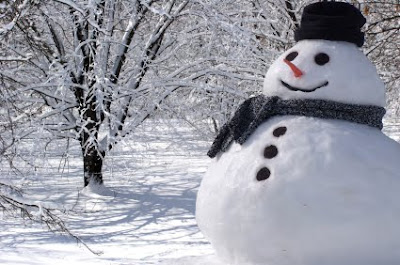 ﻿If this winter is anything like the last two, snowmen should be appearing everywhere. While it may supposedly be children who make them the truth is that snowmen fascinate people of all ages.

The best time to make one is when snow has compacted but is still moist, a few days after it has snowed rather than straight away. If the snow is powdery it won’t stick together properly.  You can make a large snowball by simply rolling the snow until it is large enough- some people create three spheres for head, torso and lower body. If you’re ambitious then you could shape it out of one huge lump of snow but this is harder work.
You can then use various items to bring the snowman to life- a carrot for a nose, stones for eyes and sticks for arms. Items of clothing brighten up Frosty, as you will inevitably call him, but if you do decide to pop a woolly hat or scarf on your creation, then you may find these items missing the following morning.

Some people claim snowmen have only existed since the early 1900s but the widely acknowledged definitive book `The History of the Snowman` written by Bob Eckstein documents them from medieval times. The earliest illustration he found dates back to 1380 and was found in The Hague.

The official record for the world’s largest snowman was set in Maine in the United States in 2008 and was actually a snow woman. She stood 122 feet 1 inch tall.
There is now a World day of Snowman held every year on 18 January though exactly what people should do to become involved is vague. The official website declares rather airily “This is your day, a day you may form by yourself” which could mean anything or indeed apply to any day.
People can become somewhat irrational when it comes to their snowman. Last year, Kent Police branded a Chatham woman “irresponsible” after she dialed 999 to report that her snowman had been stolen.
A website called Urban Pup sells clothes designed to be put on snowmen including a sweater with a hood and a coat.
Snowmen have inevitably been brought to life in a whole series of fictional situations. Once animated Mr S gets up to all kinds of things but is generally seen as a benevolent force, the best loved being Raymond Briggs’ story `The Snowman` which has become a stage show. 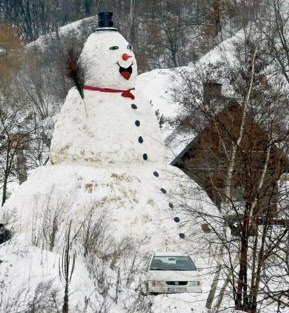