Can Misfits survive without its lead character?
John Connors looks at the first half of the third season to find out. 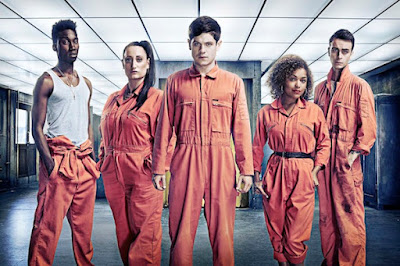 ﻿
At first it seems as if the departure of Robert Sheehan and his larger than life character Nathan will make little difference to Misfits. Newcomer Rudy with his two personalities talking to each other initially proves easily able to make us forget Nathan.  Joe Gilgun provides identifiable enough gaps between Rudy’s two aspects and the conversations he has with himself are wittily scripted and performed. In a Nathan like way, for much of the first episode he’s at risk of making the others seem a little dull and responsible. Visually the episode bristles with confidence from its trademark shooting style and some excellent effects, the most subtle of these being Curtis’ shadowy morphing which seems to happen without you noticing.
We also seem to be exploring more about Seth, the guy who gives out the powers and who develops something of a relationship with Kelly. While that side of things is fine and indeed played perfectly by both actors, the idea of a person whose power is the ability to collect and give out powers seems to diminish the initial idea that the storm caused the characters to develop these powers based on aspects of their personalities. This is still referenced in the animated opening credits. The fact that subsequent episodes seem to draw a parallel with drug dealing is interesting though suggests that hundreds of people have these powers and in the end seems to make the show less unique.
It may be that the show’s writers are running out of ideas especially given the fact that the characters are back in the orange overalls at the end of the opener in what seems like an attempt to reboot rather than develop. Thus the next three episodes disappoint on different levels. Episode 2 is simply too slow and does not really explore Curtis on more than a superficial level. As a character he has barely changed since the start and it’s not as if Nathan Stewart Jarrett could not play weightier material, he simply doesn’t get it. Curtis’ attempts to reignite his athletics career as a girl is played more for laughs than anything and while comedy has always been a big part of the show, the script here is lacking  in something that makes us like or even be particularly interested in his dilemma. It’s a shame as this is an interesting concept but somehow doesn’t gel here.
Experienced genre TV watchers will guess the premise of the third episode fairly quickly as it has been used on several occasions but that should not spoil our enjoyment too much. While testing out his superhoodie skills Simon rescues a teenager called Peter who turns out to be a superhero fan with the power to make whatever he draws in comic book form actually happen. Perhaps a more cautious approach would have allowed the plot- and the question as to whether we’re actually seeing what’s really happening-  to simmer for longer but as it is some of the emotional impact is lost too soon. Also, Iwan Rheon struggles to convey what his character is feeling as well as both Antonia Thomas or Michael Marcus (who plays Peter) do so it’s a little lop sided.

Peter’s drawings (uncredited but perhaps done by the series’ art department) are excellent while the scenario allows Rudy to add dollops of inaccurate speculation as to what Simon and Peter are up to. It’s during this episode though that you can’t help feeling that in creating Rudy, the writers have not made him distinct enough from Nathan to be a vital character. There are many occasions here where he appears to be speaking lines written for his predecessor. Joseph Gilgun does his best –especially with the split personality scenes – but Rudy has yet to contribute anything that defines him as anything other than Nathan mark 2.
As for the fourth episode, it may be looked back on as an aberration or it could be pinpointed as the moment when Misfits went off the boil. Its’ difficult to see what the thinking is behind doing this story as it does not seem to relate either to any ongoing storyline nor the main characters themselves apart from the superficial fact that Kelly saves Seth but she could do that in any context.
The cast struggle to put meaning into scenes that move the programme into a broader genre place that it does not really belong in. The jokes are forced and the extra characters behave as if in an episode of Blake’s Seven which is not what Misfits is about.  All credit to the production team for staging what is in all likelihood the most expensive episode to date- though still miniscule even compared to the likes of Merlin or Doctor Who- but they should really have spent the money elsewhere.
Even if you accept the episode on face value and treat it seriously it is somewhat lacking in all areas. Time travel stories demand the writer’s diligence if they are to be in any way believable; even Doctor Who’s Steven Moffett is not immune to trying to be too clever with this kind of stuff. Yet his recent work is Shakespearian compared to the cut and paste approach in which every situation is too conveniently contrived treating time travel as if it’s like catching a train. Nonchalance in crazy situations has served the series well but this is one fantastical leap too far. The Hitler gimmick is over done in genre series anyway and one can only groan as Adolf is wheeled out in yet another series as an easy short cut to `changing history`. The whole thing is just too simplistic to work, too weakly written to intrigue or even amuse.
Posted by John Connors at 19:01