Steve Wright: “Yes it's true!! Welcome!! We're going to start off with Maxi Priest!! Some guys have all the luck!! Here!!”

[18] MAXI PRIEST: some guys. New Sets! The initial impression is of neon tower blocks. Actually, although the blocks do have horizontal neon tubes on them, the blocks are reflective or semi-transparent -Perspex or some sort of gauze? - which get most of their colour by being lit from above which gives the blocks the impression they glow from the inside. There are also a few grills and grates designed for cameras to look through. These grates carry a hint of the forthcoming 90's trend for things to look a bit industrial.

If my mental map of the Top of the Pops studio is correct then Maxi Priest is standing on what would previously have been the stage with three perspex pyramids in the background. You can see it in the 12/11/1987 edition, it's the one Mirage performed on and opposite was the V-shaped stage used by Alexander O’Neil. Wide shots suggest all the old stages have been swept away although the same basic layout has been kept; a stage set into the corner of the studio, then steps leading up to a bridge, then steps down to another stage. Having all the stages look the same gives consistency and when cameras shoot of the edge of a stage the scenery appears to continue off into the distance. Has this change been driven by a desire to make the studio seem bigger, like the one used for Top of the Pops USA? Take a bow Grenville Horner, who is credited with Design. I assume he's the person responsible for the new look.

Brian Whitehouse (for it is he) delivers a nice camera move at the end of Maxi Priest's song. The camera pulls back for the standard wide shot of the studio then pans left and keeps going, and going, until it finds Simon Mayo standing on the stage opposite, and then it pans round him some more, until one of the Top of the Pops logos is visible in the background. Does Maxi Priest have a couple of siblings called Mini and Median? (John – Yes.) 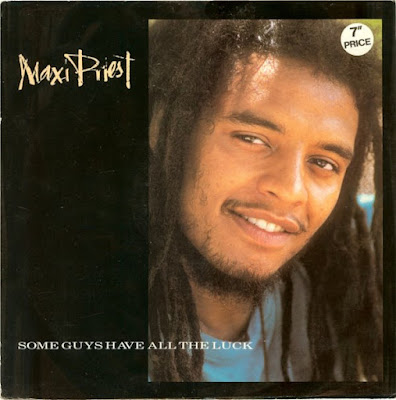 [9] WHITNEY HOUSTON: so emotional. On video.

[25] THE PROCLAIMERS: letter from america. A chance to take a look at how the new sets interlink. Steve Wright's up on one of the bridges (remember, I'm only allowed one complaint about how ghastly he is -this is a reminder so it doesn't count) and the camera pans right to where the Stargate stage would have been. This stage carries the same broad design strokes of semi-transparent and reflective blocks which pick up the lighting, and stripes of colour, but it's a different layout; which allays some mild concern on my part that the more consistent design might get boring. This stage has four vertical columns supporting a horizontal cross, which adds a new background element to low-angled shots looking up at the ceiling.

Geoff Beech is on Lighting again this week. There are a lot fewer flashing lights -at least

so far- but the use of colour is really good, and he places low orange lights behind Charlie and Craig Reid which outline them with a halo from certain angles. Teal and orange has become something of a visual cliché, but with the brother's blue shirts and black jeans the effect is striking.

[20] BARRY WHITE: sho' you right. Suddenly the Top of the Pops studio looks completely different. The lighting is darker and the atmosphere is smokey. This is not due to the presence of the, “hippopotamus of love” (as S. Mayo Esq. inaccurately dubs him, wrong water-going mammal Simon) but because this is a pre-recorded performance on the old main stage. You can catch a glimpse of the old stages at the edges of some wide shots. There are 647 people on stage with Barry White.  I'm sure they're all essential to the song but do they all have to cram into a single dressing room and watch Barry White get changed into his wide-collar shirt and jacket (which appears to be made out of carpet)? That seems unfair when The Proclaimers have acres of space all to themselves. 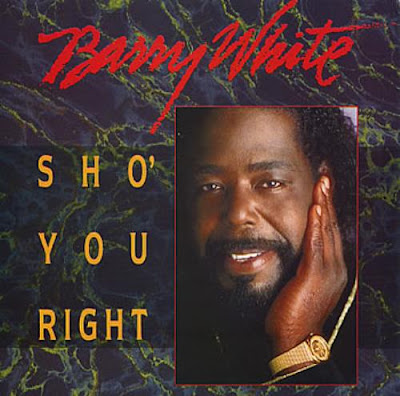 TOP 40 BREAKERS: Simon Mayo and Steve Wright introduce the Breakers in front of the colour screen to the left of the main stage. It's a tight medium shot which doesn't show any of the surrounding scenery so there's no chance to see how the redesign extends to the main stage. [26] BOY GEORGE: to be reborn; [23] THE SMITHS, i started something.

[17] DONNA SUMMER: dinner with gershwin. The new sets are multi-levelled, and can be used to pull clever camera moves like the one here which starts level with the host and pans horizontally across to look down on Donna Summer. Unfortunately Steve Wright introduces Donna Summer, and the niceness of the camera move is offset by Steve Wright being all nutty, like loopy kook!! He can't just turn and point, that would be squaresville daddio. He has to point sideways while maintaining eye contact with the camera and pursing his lips. If he didn't do that we wouldn't know what a droll oddball he is!!

I hate him so much.

[11] WHITESNAKE: here i go again. Simon Mayo and Steve Wright say goodnight in a wide-ish crowd shot which feels like it's been deliberately packed with people in order to obscure my chance of getting a good look at the main stage. I'm on tenderhooks here but I guess I'll have to wait until next week for a glimpse. Gary Davis and Simon Bates next week. The video for Whitesnake features the lead singer, Toby Whitesnake, in a car with a lady who keeps distracting him while driving. Good luck filling in the postage stamp sized box on the insurance claim form asking for the cause of the accident.

The background to the closing credits has changed. When T'Pau are shrunk down into a smaller window, the background is an out of focus shot of some of the studio grate scenery, lit purple.

Performance of the week:  Barry White, sho' you right. (John- Yay! for the Walrus of Love as he should be correctly named)

The Roxy Playlist (17/11/1987): The Proclaimers, Letter From America; The Housemartins, Build; The Communards, Never Can Say Goodbye; Glen Goldsmith, I Won't Cry; Johnny Hates Jazz, Turn Back the Clock. On video: Alexander O'Neal, Criticize; T'Pau, China In Your Hand. 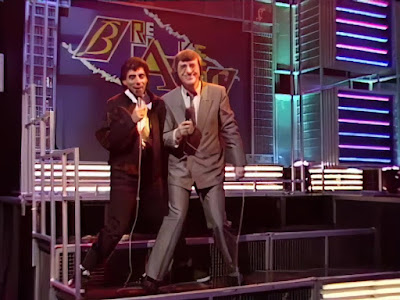 26/11/1987
Gary Davies: “Hi good evening. Simes and I would like to welcome you to another edition of Top of the Pops. In the studio tonight we have The Communards, The Housemartins, Shakin' Stevens, and Britain's Number One.”

Simon Bates: “And of course we have Blue Mercedes to start off with. First time on Top of the Pops with I Want To Be Your Property.”

[24] BLUE MERCEDES. i want to be your property. Blue Mercedes are two clots. One dressed as an amateur boxer and the other holding the world's largest keytar. If only the Pet Shop Boys had gone with this style. The boxer one has something written on the bottom of his shorts. It must be considered reasonably contentious because the camera shots are carefully framed to try and stop the viewer from getting a good look. Hang on, here's a medium shot. “FUNKY” on one leg and “ASS” on the other. Well that should scare off any crusty old Colonels or Maiden Aunts who've accidentally stuck with BBC1 after the end of the regional news. Songs of Praise is on Sunday. I said, it's on Sunday. 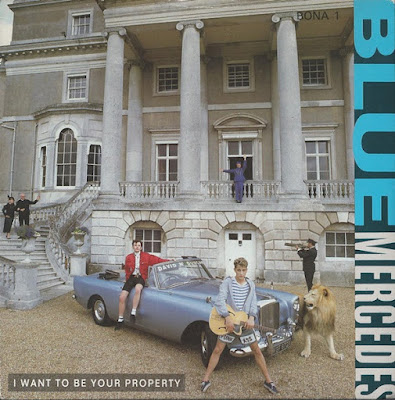 TOP 40. Brian Whitehouse taunts me. I want to see how the set redesign has affected the main stage, but once again the two hosts appear in a medium tight shot to the left of the stage. The tiny bit of the set I can see to the right of the picture certainly looks like it might be different...

*It's a dance you reprobate.

Songs taped off the radio: [28] THE HOOTERS, satellite;

[27] SHAKIN' STEVENS: what do you want to make those eyes at me for. Looks like Shakey's had his knees done. I haven't seen him this mobile for ages. Excitement. At the start of the instrumental we get a camera shot from the far right of the stage looking back towards Shakin' Stevens and, in the background, can be spotted the right hand side of the main stage, around the neon logo. It's definitely been redesigned to fit in with the new style of the rest of the studio. The assorted neon shapes have been replaced by horizontal tubes. I wonder why we haven't had a clear look yet? Are the Production team waiting for T'Pau to leave the Number 1 slot. If they have to reuse their performance recorded on the old set it would make the recycling more obvious.

TOP 40 BREAKERS: Simon Bates and Gary Davies adopt Shakey-style bent kness poses to introduce the Breakers. It makes them look like they are suffering from twin bladder infections. [28] THE HOOTERS, satellite; [23] PAUL McCARTNEY: once upon a long ago.

19] THE HOUSEMARTINS: build. Simon Bates: “Like Paul McCartney everyone else is trying to get a Christmas number one, that's his idea and here's the Housemartins' effort. The song is called Build.”

Suddenly, at the start of the second chorus, there it is behind The Housemartins. My great White Whale. A long shot giving a clear look at the redesigned main stage. As previously noted, the neon shapes have gone replaced with regular squares of purple and blue horizontal neon tubes separated by flat reflective metal panels. I'm not sure I like it. The join between the edges of the new set and the recycled (and presumably quite expensive) neon logo looks awkward but maybe it will look better when Paul Heaton's head isn't in the way. 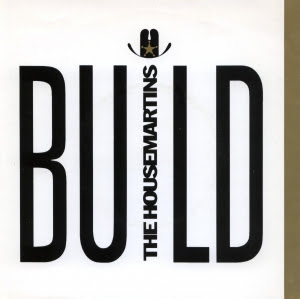 [1] T'PAU: china in your hand. I speak and it happens. Brian Whitehouse opts to reuse T'Pau's performance from 05/11/1987, recorded on the old-look main stage.

[2] GEORGE HARRISON: got my mind set on you. Gary Davies and Janice Long next week. George is on video, not even the chance of having his performance used on Top of the Pops USA is enough to lure the grumpiest Beatle into the studio. The background to the closing credits is a different blurry close-up of scenery, this week it looks like a air vent.

Performance of the week:  The Housemartins, Build.

The Roxy Playlist (24/11/1987): Blue Mercedes, I Want To Be Your Property; Paul McCartney, Once Upon A Long Ago*; Mirage, Jack Mix IV; Maxi Priest, Some Guys Have All the Luck. On video: Boy George, To Be Reborn; Whitney Houston, So Emotional; T'Pau, China In Your Hand.

* Paul McCartney made the trek to Newcastle to record a performance for The Roxy. You can watch it here (https://www.youtube.com/watch?v=8oC66623Q_8). It's astonishingly high concept, and I could believe it was actually the official video. Best bit, children crowd round the piano to watch a visibly uncomfortable Linda McCartney play.