Seed of Destruction
Sooner or later most sci-fi tv shows get round to the doubles episode wherein one or more of the regulars are somehow duplicated and it takes ages for anyone else to notice even though they are behaving out of character. This is one of those episodes and it is Commander Koenig who is copied when he goes exploring a mystery asteroid that is causing Alpha’s systems to malfunction. The place is largely covered in ice except for a crystalline cave in which he himself describes as like a hall of mirrors. This gives director Kevin Connor the opportunity to play some visual tricks with reflections which also forms the basis of the plot. For this is the resting place of what remains of a race called the Kalthons whose own world perished and who are cryogenically frozen waiting for an unsuspecting traveller to show up. Handily they speak English though we never really see them. 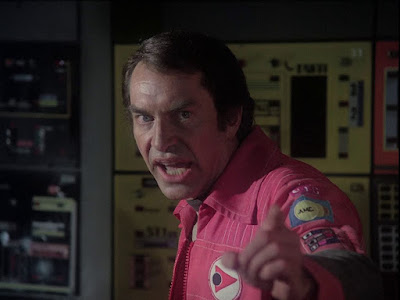 These double episodes must be fun for the actors and here Martin Landau gets to bellow and shout as the Koenig copy issues orders that start to drain the life support systems claiming it will save Alpha. When Helena happens to touch him he is icy cold and both Tony and Maya also have their suspicions. There is of course much to-ing and fro-ing for the first half hour which is rather slow but then things liven up when the others finally decide to take some action. The cast give it a good shot livening up hackneyed lines like “I call it mutiny” with gusto presumably glad to have something other to do than pretend to tap on consoles.

Some of the plot contrivances are awkward ones- why for example does fake Koenig bring a lump of crystal with him that later serves to give Maya a big clue. Yet there are more interesting aspects too such as Koenig’s hair parting being the biggest clue of all.

As often seems to be the case in this second season the denouement is left till practically the end of the episode climaxing with a very well done shattering mirror image through which we can see the computer banks behind. It is a very visual episode into which a lot of thought was clearly put into how to use the mirrors. The one bonus of the late ending is there is no time for a little awkward banter at the end sparing us a potentially rubbish reflection gag! 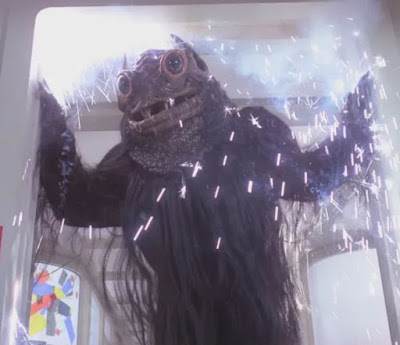 The Beta Cloud
A common fault of period tv sci- fi is the lighting which is invariably too bright exposing the shoestring budget with which many such programmes were made. In this lively story where a strange cloud sends a monster to take the Alpans life support those lights remain on full strength robbing proceedings of potential tension. In theory a seemingly indestructible creature roaming Alpha defying all attempts to stop it should be edge of seat stuff. Indeed many of the sequences are well assembled. However the design of the alien is just not frightening at all. The ending does rather craftily offer an explanation as to why it looks unconvincing with big bug eyes that don’t move but then you ask yourself- why? Why would this cloud which is powerful enough to affect Alpha’s systems and render the majority of its personnel incapacitated with some sort of fever undertake such a laborious method? The series usually has powerful beings in gaudy robes who beam down- here we have a weird looking creature that wanders around `looking` for life support when the cloud had already shown it can disrupt the base’s systems. So why not just send Bug Eyes directly there?

The answer of course is that such logical action would result in a very short episode. Instead we have a number of encounters in which the remains of the crew led by Tony, Maya and Bill utilise every chapter of the TV Sci-Fi Methods to Defeat Invaders handbook. Electricity? A vacuum chamber? A chlorine filled room? Great big futuristic rocket launchers? Even firing the laser cannon at the cloud? Yep, they are all here. And the cloud can talk – but not the creature – and even gives one of those mad manic laughs.

Most of it is well done and it makes a refreshing change of pace to have a maximum action/ minimum talking episode. The cast give their all but that creature looks so odd that the effect is not half as riveting as it should be. It doesn’t help that the sound people have added someone walking in boots for its footsteps. Eventually, Maya realises the creature must be a robot. Why would the cloud send a robot disguised as a creature you ask? Well we never find that out. In fact we never find out what the cloud is. Maya turns into a wasp, flies into it’s ear and causes it to malfunction.

This is an episode designed to showcase the main supporting characters and this is does well. It makes a change for Koenig to spend much of the episode asleep. Somehow the cumulative effect of it though lacks the excitement it is clearly supposed to have but it’s a fun ride anyway.