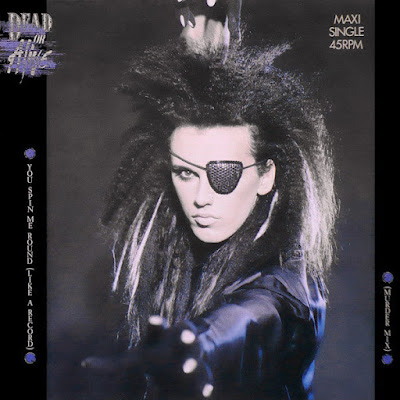 [17] The Commodores: Nightshift. On video. Simon Bates is shot in head and shoulders close-up for his link into the Commodores. I don't know what lens they are using but the effect is uncannily like the Star Trek episode The Tholian Web, when Chekov gets space madness and we see Mr Spock from his distorted point of view. 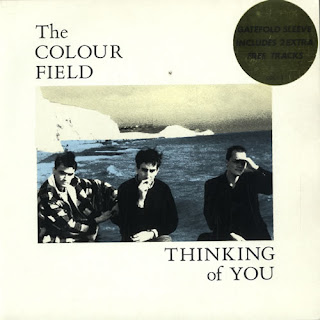 [13] The Colour Field: Thinking Of You. It's Janice Long's turn to get the space madness close-up, before The Colour Field. The Colour Field have a drummer but you wouldn't know it from the staging of this performance. Terry Hall and the others form an inpenetrable wall at the front of the stage to obscure the drummer from view. Perhaps he suffers from scopophobia. (Fact John- An irrational phobia about being seen.)


[24] Killing Joke: Love Like Blood. The Killing Joke are appearing in Hanley “tonight” according to Janice Long. Where's Hanley? It's in Stoke-on-Trent, the most romantic place in England. Happy Valentine's day. The power of the internet is revealed when a Google search for Killing Joke Hanley pulls up a website called Setlist FM, which promises “Get the Killing Joke Setlist of the concert at Victoria Hall, Hanley, England.” Amazing! Clicking the link reveals the limitations of the internet. “Sorry, there are no songs in this setlist yet.” (John- They are taking a long time with that aren’t they?) The site gets the concert date wrong as well, unless this edition of Top of the Pops was recorded on 4th March 1985 and broadcast back in time.


[26] The Smiths: How Soon Is Now? Janice Long is terribly excited by the presence of The Smiths in the studio. It's genuinely charming.


[8] Russ Abbot : Atmosphere. “We're all waiting for the album and a major tour,” says Janice. Which seems unnecessarily mean to the popular ITV funnyman.


[7] Howard Jones: Things Can Only Get Better. The video is dull faux-concert footage, but it does reveal that Howard Jones has entered his Toyah Willcox phase, as the clothes and hair get ever more extravagant.


[6] Prince: 1999. “It's amazing that this week's wally, Prince, can make such good records.” Janice Long's mood seems to have rapidly soured since The Smiths left the studio.


[5] Foreigner: I Want To Know What Love Is. “One thing's for sure Foreigner don't need blankets over their heads,” says Simes trying to be cool by joining in with the Prince bullying. These ripped-from-the-headlines topical references are about Prince's appearance at the 1985 Brits which you can see here https://twitter.com/i/status/830438769731870720


All decent folk were so outraged by this spectacle that Prince was forced to sneak out of the county under a blanket. I would link to the news photo but it's owned by the formidable Getty Images conglomerate and I don't want to get John into a copyright dispute. Do a Google search for Prince 1985 blanket. (John- This will also tell you where you can buy a Prince duvet.)


[4] Bruce Springsteen: Dancing In The Dark. “The best bottom in the charts,” according to Janice Long, but does Simon Bates agree?


[34] Eugene Wilde: Personality. Audience dancing, credits, and the distant sound of Janice Long trying to batter down the door to The Smiths dressing room.