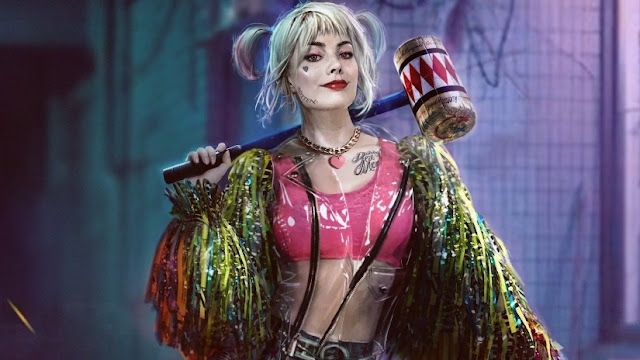 The movie is as wordy as it’s original full title though even that has been altered in some US cinemas to simply Harley Quinn- Birds of Prey. This reflects a duality present throughout the movie – is it about Harley Quinn or the Birds of Prey? As it plays out the latter only come together for the final sequence and at the very end carry on without Harley who remains a free spirit. So why shove them together in the same film? It often feels like two films in one and the need to backstory several characters makes for a less than involving first half. Both stories could carry their own film, together they are too weighty. There is a lot of exposition via a quirky narration from Harley that means the film never seems to get going till more than half way through.
We open- though we will go back and forth many times – with Harley having been dumped by the Joker meaning that without his protection all the lowlifes she wronged are now free to carry out their revenge. The Joker’s not in the film at all but his presence remains thematically and even visually courtesy of some animation and also a hand made dart board. Via a series of incidents Harley’s fate becomes linked with a diamond which also brings together (slowly) a disparate group of women each with their agenda. There’s overlooked cop Renee Montoya whose bravado attempts at solving crime end up with her being suspended and as the movie reminds us no good cop gets things done till they’re suspended! Rosie Perez is excellent as Montoya tries to hold her own with younger antagonists and still has some levity in her performance. There’s also Huntress (though no one will call her that to her annoyance) who despatches victims that wronged her family with a crossbow. Dinah Lance aka Black Canary is a singer and works for the film’s big bad Roman Siosis (a gleefully nasty Ewan McGregor) and there’s also a pickpocket girl called Cassandra Cain. I’d assumed the film would link them up to fight crime but this only happens near the end when theirs and Harley’s connected plots are drawn together for a showdown in a fairground giving some dazzling imagery and team work. Watching this section made me wish they’d collided together much sooner. 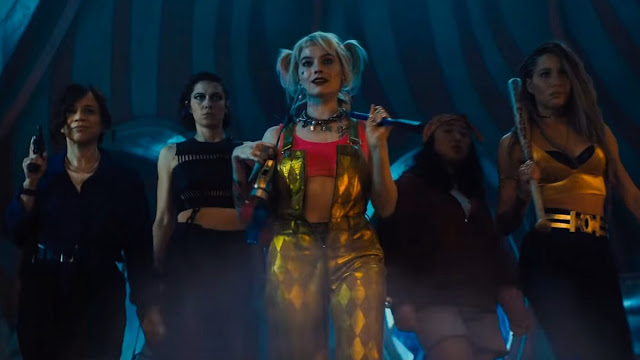 It is Margot Robbie’s larger than life performance that papers over some of the film’s deficiencies, she adds more nuance to Harley than in Suicide Squad, yet never loses that playful abandon and knowing cool that makes her great for movies. It works of course if you don’t question the morality of the character. Her fun, feisty behaviour can obscure the fact that she is like many similar so called superheroes - a self- appointed vigilante. However without any special powers her remarkable survival throughout the travails of this movie makes clear we are not supposed to view any of this in terms of realism.
The whole thing is directed with a livewire energy and some odd visuals (bullets that emit coloured smoke, a Marilyn Munroe concussion sequence, a hyeana!) by Cathy Yan who handles the often serious violence with a comic book approach and not dwelling on it.  This does tend to undercut the more menacing scenes, particularly Sionis’s threatening behaviour. Like other genre films it also tends to become somewhat repetitive with scene after scene of gymnastic and clearly choreographed combat sequences.  Its much better when these become inventive towards the end with an unusually staged vehicle chase, the great showdown amidst fairground rides and a final fogbound confrontation. By the time Birds of Prey comes to an end it feels like it’s only just starting!