[5] Neil: Hole In My Shoe. The audience have been issued with what look like roses. This can't end well with all those balloons drifting around. This appearance is fresh off the back of series 2 of The Young Ones, which finished on 19 June 1984. I didn't see it. At 9pm my family's television would have been firmly set to BBC1 to keep up with all the latest news. On balance I would have preferred The Young Ones but I also missed the 1985 repeats. I had to wait for a randomly scheduled episode which went out at 21.55 on Saturday 29th April 1989 for some reason. After missing The Young Ones I was diligent and kept track of all the latest hot new comedies. I saw all of A Small Problem, Bootle Saddles, and both series of Lame Ducks. That's right, look impressed. (John- Are you making those up? Or are they real series like, say, The Cheeky Monk)


Top of the Pops is not a natural environment for comedy. Ullo John Got A New Motor? worked because of Alexi Sayle's frightening charisma but too many comedy singles curl up and die in front of the studied indifference of television's coolest audience. Nigel Planer does well to earn a few indulgent chuckles. Although it seems unfair that his (pretty good under the circumstances) prat fall generates less laughter than Stu Francis announcing he could crush a grape on Crackerjack.


Neil returned with Hole In My Shoe on the 26/07/1984 edition but unfortunately that's co-presented by D*v* L** Tr*v*s. It's the performance where Neil asks for less smoke and complains that everything is getting too commercial. It turns out the flowers are paper.


[13] Alison Moyet: Love Resurrection. On video. In the desert in Israel for some reason.


[28] Phil Fearon & Galaxy: Everybody’s Laughing. Phil Fearon is doing his best but for some reason the cameramen are more interested in the two female backing singers.


[26] Echo & The Bunnymen: Seven Seas. Echo and the Bunnymen seem reduced. There's only three of them on stage, isn't the band normally a quartet? Oh and the two non-Echo ones have dressed as a penguin and a frog. Down at the front of the stage lurk two louts in FRANKIE SAYS t-shirts. At first I thought they said "FRANKIE SAYS WHERE'S BEZ?" but that doesn't make any sense because Bez is in Manchester with the rest of Happy Mondays. Closer inspection reveals that the t-shirts read "FRANKIE SAYS WHERE'S LEZ?" and suddenly everything falls into place. Les Pattinson is missing, which is why Echo is one Bunnyman short of a warren. 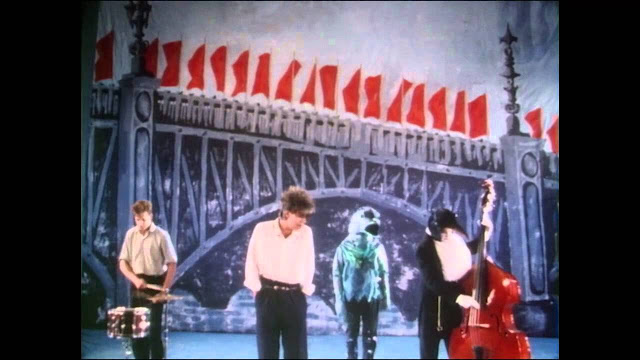 At the front of the stage are two rows of blue-painted, wooden waves. The purpose of the louts becomes clear when they grip the waves and saw them backwards and forwards creating a convincing seascape. The t-shirts suggest they are not BBC employees. They must work for Echo And The Bunnymen LLC (Isle of Man) a subsidiary company of Northrop Grumman Corporation.


[14] The Bluebells: Young At Heart. The last appearance by The Bluebells for the time being, but don't worry if you missed them. They'll be back on Top of the Pops in 1993, which will involve reforming the band.


[1] Frankie Goes To Hollywood: Two Tribes. Two Tribes at number 1, Relax at number 2. Everything's coming up Frankie. I've only just realised the Relax ban must still be in place because otherwise it should be featured; Top of the Pops even has a performance it can repeat (05/01/1984 edition) if the Frankies don't want to appear twice on the same show. Relax has been creeping back up the charts since 5th May; finally breaking back into the Top 10 again on 23rd June. There's a precedent for playing songs that defy chart gravity and go up again; the repeat of Blue Monday on the 06/10/1983 edition after 22 weeks.


Frankie Goes To Hollywood are back in the Top of the Pops studio for the first time since 21/06/1984. The crowd are waving more paper flowers and before the song starts Paul Rutherford borrows one from someone in the crowd. He delicately smells it and then returns it to the owner. They're paper Paul. They don't have a scent.


[20] The Jacksons: State Of Shock. Credits and audience dancing. 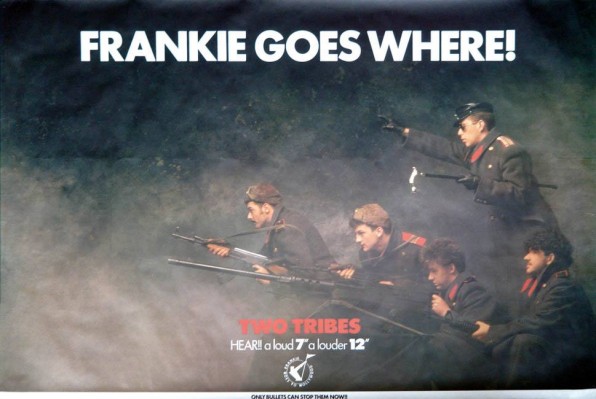