The lesser known Apollo 10.
This month is the fiftieth anniversary of the first Moon landing an event now so familiar that it has probably lost much of it’s sense of achievement. Nowadays people are more interested in trying to prove it was somehow faked than being  impressed that it happened which doesn’t say much for advancement in other areas of life. I don’t really recall much about it except that there was a buzz of excitement and families did huddle together watching grainy tv footage as events unfurled. When you’re a child it is hard to understand the technology and power of sending someone to the Moon, in fact I’d only just put aside the notion that the Moon was actually a giant luminous face in the sky. By 1969 I was probably formulating the idea that it was inhabited by alien beings of some sort. When Neil Armstrong’s boots touched the lunar ground those aliens had just stayed hidden. 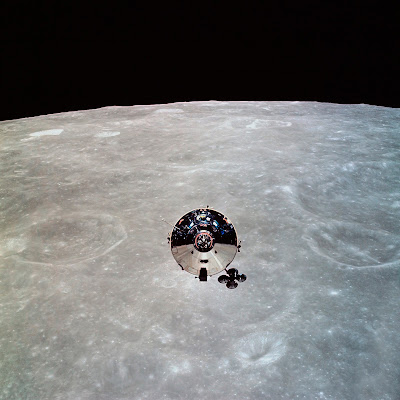 When you think about it how else could the Sixties have culminated other than by landing on the Moon? A decade where people were getting higher one way or another, a decade of cultural expansion like no other was always going to climax with men walking on the Moon. Of course it was. It is incredible to think just how captivated people were by the Moon landings and those missions that came before. Technology in 1969 may have been advanced enough to land men on the lunar surface but back on Earth people had to be content with blurry pictures and that bleeping noise with which everyone soon became familiar. Yet people pored over these grainy images and slow moving action for hours and hours. My Dad even recorded the live footage albeit on audio reel to reel tape because unfortunately not even video was available yet


A couple of years later, in 1971, the command capsule from the lesser known Apollo 10 mission came to Liverpool as part of a tour which took it to The Liverpool Show before being exhibited at our main museum and later at the Southport Flower Show nearby. One of the astronauts  - Apollo 8’s Bill Anders - also appeared at the event.. The Liverpool Show was a sort of `bit of everything` day out for the whole family and encompassed an eclectic number of displays ranging from home furnishings to the armed services but this was the premier attraction that year by a long way.  Even though this wasn’t from a mission that actually landed on the Moon it was still something of enormous interest as Apollo 10 had been a dress rehearsal for that touchdown.  The thing that struck you the most though was just how small and flimsy this capsule looked. Could it have really travelled into space and back? Well it is made of a combination of aluminium, stainless steel and titanium with epoxy resin heat shield covers on the exterior. So, yes, it did! 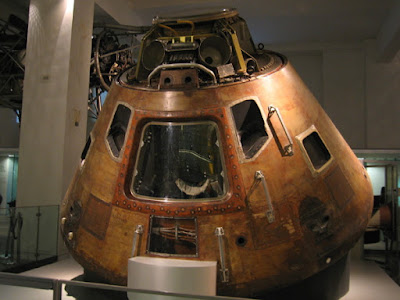 Also on display was a half-ounce piece of rare Moon rock which to be honest looked like a normal piece of rock; grey and no bigger than a small lump of coal. I’d like to report that during the weekend it would occasionally glow a blue colour and take over various people from the nearby RAF display placing the mantra “Fly me to the Moon” into their heads. Then at the end of the Sunday the rock vanished along with a small plane, both never to be seen again. That probably didn’t happen though.


That piece of Moon rock was nominally valued at £10 million back in 1971 though in truth its value as something unique was incalculable. When it subsequently appeared in Southport, the local paper reported that a total of eight police officers were assigned to protect it as it was escorted from a secretly located strong room in a vacuum chamber inside a sealed box. The capsule, protected by a screen of toughened glass was mounted on a low loader trailer. 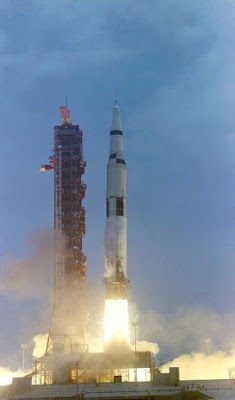 While the `on tour` Apollo 10 exhibits thus became for Europe the visible `face` of the missions it’s probably less well known than its illustrious history making successor. The Apollo 10 mission was launched in May 1969 with the three man crew of Commander Tom Stafford, command module pilot John Young and lunar module pilot Eugene Cernan. The main aim was to test the lunar module in orbit taking it to within 14.5km of the surface before performing a simulated `abort` taking them away again. This must have been very frustrating for the crew coming so close to the Moon, knowing they probably could have landed, but not being allowed to do so. It was later revealed that less fuel than would be needed to actually land was placed in the craft so that even if they had been tempted the astronauts would not be able to land. Apollo 10 orbited the Moon 31 times before returning to Earth and just two months later the historic first landing took place courtesy of Apollo 11. The iconic nature of that mission means Apollo 10 is overlooked yet it played just as significant a part taking its own small steps towards the ultimate goal.


The Apollo 10 mission did set its own record though when John Young became the first man to fly solo around the Moon as the other two flew the lunar module into orbit. On the fifth day there was almost a terrible accident when some commands were accidentally duplicated causing the lunar module to start rolling over before the astronauts re-gained control. At the time they were only 50,000 feet above the Moon’s surface. Had they not been able to regain control the capsule would have crash landed.


The command module was initially transferred to the Smithsonian Institute before commencing it’s tour which saw it exhibited in the USSR, Netherlands, France and the Uk. In 1978 it was moved to the Science Museum in London where it remains to this day. Just as it must have been astonishing for those astronauts to realise what they had achieved it is still fascinating to look at this craft and think where it has travelled. Of course for some these Apollo missions squandered money that could have been better used on relevant problems of the day but that it is to ignore the human need for achievement and exploration that inspires subsequent generations to make all kinds of difference.  It’s always about those small steps