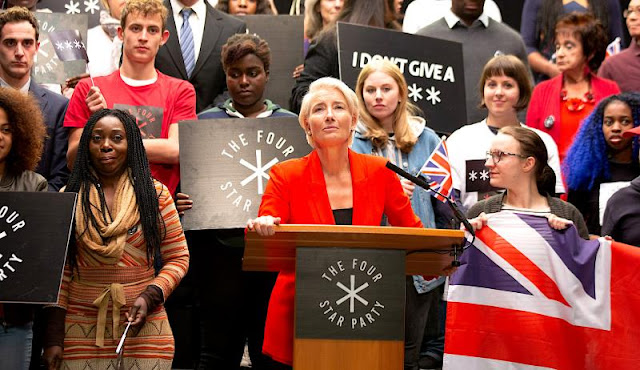 The episode sees the Uk under the Rook regime turn into a quasi- militaristic state with fenced off `criminal zones` (Rosie happens to live in one) and an increasing number of Disappeared refugees who we discover end up in so called Esrtwhile camps. In the episode’s most chilling sequence Vivienne elucidates on the nomenclature explaining in the same tone someone might discuss a nice cup of tea the origins of concentration camps with an allusion to oranges and a suggestion that in the end the first camps in South Africa are forgotten. It is exactly how a writer should pen such a monstrous character though some may find the whole thing a little tasteless. Rook’s rhetoric often chimes uncannily close to some of the stuff we hear today from extreme right wing parties and the more out there Brexiters. Meanwhile Vivenne’s speech at the start of the episode sounded like the sort of nonsense Nigel Farage might say right now; aspirational waffle that mentions greatness but lacks any detail on how to acheive it. This is a gem of a role for Emma Thomson who laps up every sentence with glee.
For Rory Kinnear too the role of Stephen is surely one of his best. Stephen is the series most interesting character because despite mistakes and mis-steps plus an ever growing tide of guilt we still want to watch him progress. Its possible that he is beyond redemption now, certainly in the eyes of the viewers and his daughter.  Russell T Davies is rarely a writer to take the most travelled route so his way of following up last week’s tragedy is to largely focus on blame. Across the episode various characters state their belief that what happened was their fault while Stephen who can’t be said to be culpable in any way is the one who gets `revenge` on Viktor by using his new found access to send the latter to one of those camps we’ve been hearing horrible things about. I’m not sure there’s been a drama where the pressing of a key has been so vital. On the one hand you don’t want him to do it but on the other if he does it will ratchet up the drama even more! 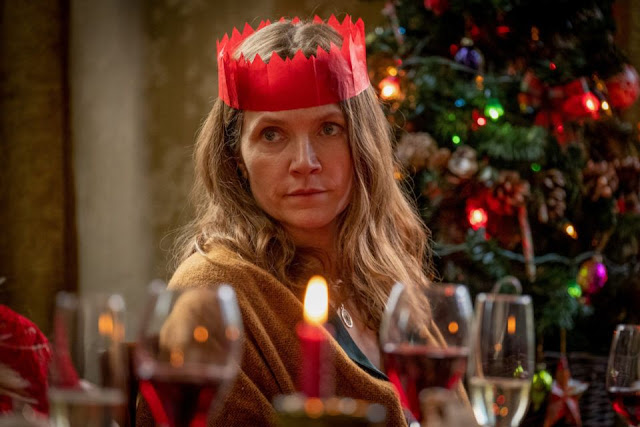 Many social media comments have picked up on how the further the series travels from 2019 the more realistic it seems. In this episode there’s talk of 80 days of rain which with the week’s weather looks like a bang on prediction possibly nine years too late! Yet we also see Gran’s macular degeneration cured 100%- at a price if she’s not prepared to wait three years. There are blackouts and terrorists too so in that sense it’s just like the 1970s. And despite the gloom the episode offers plenty of exquisite lighter touches like Gran and her dinner gong and best of all Rosie’s encounter with an government official whom she’s been addressing remotely on a screen. There’s a power cut and the official turns out to have been sitting directly behind the screen! Plus we get the return of paper! So it’s not all bad!
Posted by John Connors at 00:13