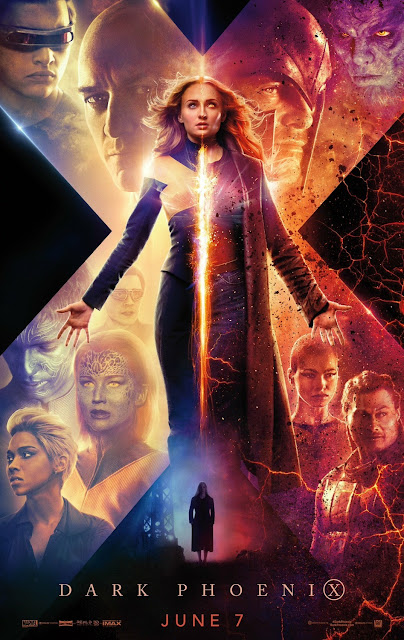 We open with a car crash caused by infant Jean Grey’s nascent power after which she is spirited away to Charles Xavier's school for the gifted. Fast forward to 1992 and the now popular, uniformed X Men undertake a space rescue of the crew of a shuttle spinning out of control. During the mission Jean is enveloped by the sort of spirally, static red thing you often see in space these days and once back on the ground seems to have acquired a barrel load of additional powers she cannot control. This not only imperils her friends but leads to discoveries about her past putting her on a collision course with the other X Men. Meanwhile some alien shape shifters are searching for her.


Dark Phoenix unfortunately shares some visual similarities with events recently depicted in both Captain Marvel and Shazam! as well as reiterating character issues already dealt with in previous X Men movies. This tends to render the subsequent events a little flat. Also it feels as if we don’t know Jean that well to really feel the change she is going through. Whereas Endgame dealt with people we felt we did know  very well the X Men franchise has always placed action ahead of character meaning a lot of unexplored potential. Combined with the relatively early sidelining of both Jennifer Lawrence’s Raven and Evan Peters’ Quicksilver, two of the most interesting mutants, the results rely on a diminished team. Nobody ever thinks to call upon the dozens of other people inside that mansion! 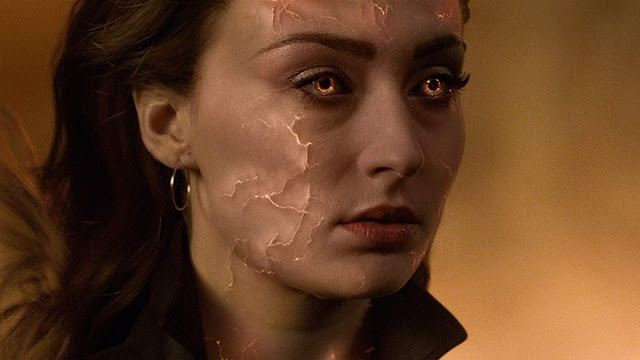 Sophie Turner though gives a good performance to convey Jean’s conflicted situation and the interplay with James McAvoy’s Xavier works well providing the movie with some personality and challenging the latter’s apparent aloofness and perhaps egotism. If these are issues previously addressed this film does give them a fresh spin. I’d have liked to have seen more between Charles and Eric whose differing motivations surely come closer to aligning than before in this plot but it isn’t developed enough. Even so Eric is at his most interesting for a while in this story, the script finding new ways of making him a magnet for trouble. There is space for a sympathetic arc for Beast aka Hank McCoy whose reactions to events provide much of the heart of the film. To its credit the script also sets out some way to rebalance the gender imbalance of the franchise even having Raven tell Xavier they should be re-named X Women. Jessica Chastain is particularly effective as the powerful alien leader and the narrative attempts to build a rapport between her and Jean. Ultimately though I’m not sure if it makes a huge difference as the female characters are equally prone to hurling each other around as their male counterparts.


Matters move briskly towards a climax which takes place in and around a train before moving into a grand city centre hotel. Again these have a familiar look to them yet are shot and edited with pin sharp momentum. There is a brutality in some of these sequences, especially involving Magneto that add a harder edge to the film. As for the ending it seems to contradict various other X Men movies- can anyone now work out how it all ties together?


Despite the dazzling X2 and Days of Future Past, the series of films as a whole seems more average than outstanding caught up in confusing time lines and unable to corral or develop its multiple characters anywhere near as well as the Avengers films do. It is not the film makers’ fault to some extent; the X Men idea has always seemed like a rather heavy handed allegory and most of the franchise’s salient points were made back in those first two films over 15 years ago now. Dark Phoenix is entertaining enough to watch in the cinema but would I ever feel the need to view it again for hidden depths or extra meanings? I’m not sure I would.