Anyone who liked the previous Mission Impossible movies will find tons to enjoy in this latest – and possibly best yet- entry in cinema’s most gymnastic franchise. There may be no superheroes in these films but plenty of superheroic feats. As ever Tom Cruise has several signature stunts where you can tell it’s him leaping, dangling, balancing, falling or otherwise risking life and limb in the case of art. Bone cracking fight scenes are edited with whip sharp speed and there are the expected plot twists and of course masks!


This time round Ethan Hunt becomes involved in tracking down stolen plutonium and the fate of Rogue Nation’s antagonist Solomon Lane. The two scenarios become mixed up in a narrative that is extended by virtue of several turns where people and/ or things are not as you’d expect. There’s actually fewer instances of someone pulling their face off to reveal their true identity this time round but when the trick is used it’s in key moments.
The action picks up two years after the events of Rogue Nation and the capture of Solomon Lane. His followers have regrouped and now call themselves The Apostles but this becomes entangled with Hunt’s mission to retrieve the plutonium when it turns out they have the items- and want to trade them for Lane via mysterious dealer the White Widow.
The plot explores aspects of choice in the face of two evils and what making those choices says about people. Ethan Hunt’s conscience again comes to the fore early on when he loses the plutonium because he opts to save Luther. This is Hunt’s thing- he wants to save people, a care that you’d never find in other well known agent franchises. While Mission Impossible can match Bond and co for set pieces, it edges ahead by at least having some sort of moral dimension.
While initially this adds an interesting depth to the action, it does sometimes give off mixed messages. Later Hunt stops to help an injured policewoman but to do so has to kill four henchmen. Towards the end Hunt’s former wife Julia has been moved to the very place at the epicentre of the action by Lane’s plotting which stretches credulity though presents Hunt with an interesting scenario. The Apostles’ name and intended targets for the plutonium- the Vatican, Mecca and Jerusalem – add a religious level which seems to get left behind.There is a parallel between Hunt and Lane’s equal determination to achieve their ends meaning the latter is a worthy foe to bring back. 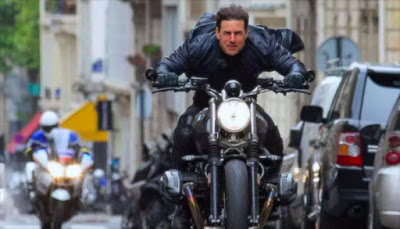 Some of the set pieces are magnificently staged so they never look over choreographed. This time round they include a powerful close quarters dust up in a public restroom, a rambunctious car chase across Paris, a thrilling high altitude free fall going wrong, a breathless chase across London’s rooftops and an absolutely bonkers helicopter chase near the end. The speed with which these play out is matched by some excellent cinematography in both London and Paris as well as the wilds of Kashmir. Danger has rarely lurked against such a rich backdrop. In truth though the film never stops moving and though it has a long running time it never drags and is well paced with some good dialogue scenes sprinkled in between the action so we can catch our breath.
Of course in the tradition of the franchise it does become more incredulous as it goes on and that helicopter sequence is just part of a wider scenario that incorporates some archetypal bomb diffusion and some surprisingly hard hitting fights. It’s a tense climax that works perfectly as a cinematic experience pulling you closer to the edge of your seat with every elastic second. And you can probably guess what number on the countdown the device stops at! 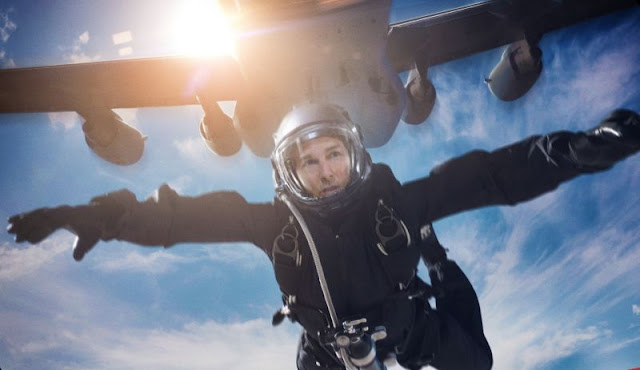 Tom Cruise suits this role more now he’s older and you can see there are interesting places they could go with it when he gets older still. His energetic commitment is on screen to see and what makes it work even better is that Hunt never – unlike Bond – emerges from a fracas to simply adjust his suit and walk off. You can see what each feat has taken out of him. He’s not Superman.
Talking of whom Henry Cavill and his infamous moustache are here too, the actor playing CIA agent Walker forced upon Hunt’s team but with secrets of his own. Cavill isn’t cinema’s most naturalistic actor and needs more support from a script that doesn’t give the character much shade. Cruise is well supported by the usual team however with Ving Rhames especially getting some interesting scenes.  Sean Harris again gives good value as Lane managing to be menacing even when tied to a chair in a straightjacket. Angela Basset is underused as breezily steely CIA director Erica Sloane but a strong presence nonetheless while Vanessa Kirby is excellent as the intriguing White Widow who we don’t see enough of. Alex Baldwin has fun too as Hunt’s boss.
Paying suitable homage to the original tv series (that cracking Lalo Schifrin theme is still present in a fantastically reworked version) as well as previous films in this series while forging ever more elaborate action Fallout seems like the majestic pinnacle of what Mission Impossible can achieve.