[26]. Depeche Mode: Everything Counts. That low-angle shot of Mike Read didn't happen. Depeche Mode are on video, showing off their holiday footage of West Berlin.
[30] Elvis Costello & The Attractions: Everyday I Write The Book. Elvis Costello looks hot and sweaty. A stuffy and crowded television studio in July is not be the best place to wear a long-sleeved top. Elvis Costello and the Attractions have the misfortune of appearing  on possibly the the most hideous set designed for Top of the Pops. It's a lurid mess of coloured jagged lines; as if all the financial graphs from The Money Programme came to life and tried to escape at the same time. For added eyestrain the jagged lines are all brightly coloured, and some of them are neon. In close-up the exciting (in the ironic sense) shapes and bright colours look like the music set from a well meaning show designed to engage Young Adults (Nozin' Aroun' perhaps) and it's the first time Top of the Pops has actually looked like a kids programme.
[29] The Creatures: Right Now. Oh my. This is a perfect example of a song I'd completely forgotten, but as soon as it started I could have quoted the lyrics at you; I particularly remember the couplet, "you have set my soul on fire/only you can satisfy this great desire". I hated The Creatures previous song, Miss The Girl, (I was an 11 year old idiot) and it's odd to realise that they proved to be responsible for the two songs of 1983 that most comprehensively lodged themselves in my subconscious. I obviously liked Right Now a lot. I can't account for another reason why it should unpack itself so well in my memory. Yet, I remember nothing about it. Did I even realise it was by the same band who had released Miss The Girl? I refer you to my earlier point about being an 11 year old idiot. Oh, by the way for those of you keeping track, this is the video.
[25] The Lotus Eaters: The First Picture Of You. Not, as I though at first, a follow-up single to The Last Film (that was Kissing The Pink). And, don't get The Lotus Eaters confused with The Bounty Hunters (they were searching for paradise, and disappointingly kept finding Bounty bars instead). (John- Cos I like this song so much I'm putting a clip on here...)

[4] Malcolm McLaren: Double Dutch. Ludicrously impressive skipping skills from the Dynamos Double Dutch team. The two professional Zoo dancers on the stage behind the team struggle to keep up.
[31] Robert Plant: Big Log.  Robert Plant's on The Money Programme stage. He looks pleased and delighted to be making his first Top of the Pops appearance. No. Hold on. he doesn't look pleased and delighted. He looks surly and bored. Maybe the graphs remind him of the performance of his high yield investments?
[28] George Benson: Feel Like Makin’ Love. George Benson feels so much like making love that he can't leave the house. So here's Zoo to do some dancing.
[10] Bananarama: Cruel Summer. Gasp. Bananarama aren't performing on one of the Top of the Pops stages. They're on the scaffolding bridge. Can such a breach of format be tolerated? Actually it looks pretty good. Whoever's Directing this week (take your pick between Gordon Elsbury who's listed as Production Manager, and Michael Hurll credited with Production) uses the opportunity to get some good low-angled shots and pans under the bridge. It's almost a disappointment when Bananarama turn and march off the bridge, and onto a stage. But wait! There's more! When the next verse ends the group turn and again march to a third stage. I get it! It's like when Adam Ant did Goody Two Shoes in 1982. 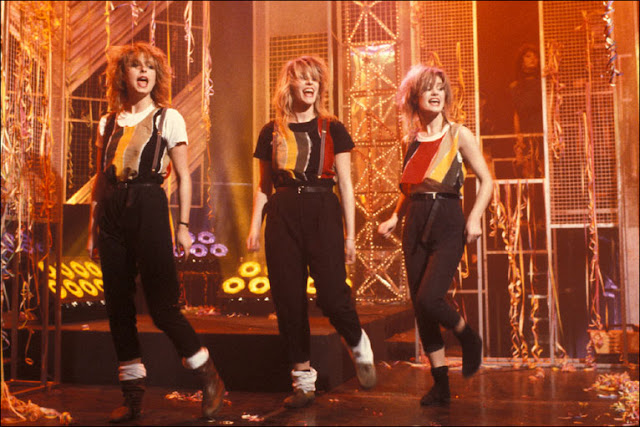 [1] Paul Young: Wherever I Lay My Hat (That’s My Home). A song that had all possible romance stripped from it when one of my classmates rechristened it Wherever I Wet My Bed (That's My Home). Can I be the 1,464,168th person to point out that at no point in the video does Paul Young lay a hat anywhere. In fact when he leaves the house of Blonde Lady 1 he doesn't even have a hat. Or is that the point? He doesn't lay a hat anywhere so he considers nowhere home? Ahh!
[5] Heaven 17: Come Live With Me. "I was thirty-seven/You were seventeen." BUZZ. I'm going to have to stop you there.