This becomes more impressive when we’re outside with multiple pedestrians mouthing lines while lights switching on, car doors closing or even people putting their hands out to flag taxis in time to the music. The thing is that it takes several watches to spot all of these moments making for an ad that, unusually, you don’t mind watching again and again.  It’s a triumph of direction, editing, choreography and lip synching. Disappointingly you’re more likely to see the edited version now.
BT Plus is, according to the promotional blurb, the UK’s “first converged fibre and 4G plan offering customers the best connections in and out of the home” so naturally the ad reflects a city in perfect sync. The ad – called simply `Song` and created by Diccon Driver and Alan Wilson- was made by BT’s regular go-to company Abbot Mead Vickers BBDO.


Halifax has graduated from choirs and the renowned Howard to the land of Oz in its latest ad. It features clips from `Wizard of Oz  in which Dorothy and co have come to the Emerald City only to be informed by a CGI’d in chipper Halifax bloke that the Wizard has  “popped out”. He’s happy to help with Halifax stuff though Dorothy is, he tells her “far too young for a mortgage”.  He can get them home if they do “the clicky shoe thing”. As with the BT ad above the character has a name- in this case Greg – that is never mentioned in the advert at all. He also sports sparkly red socks matching Dorothy’s red shoes. It must have been dress down day. 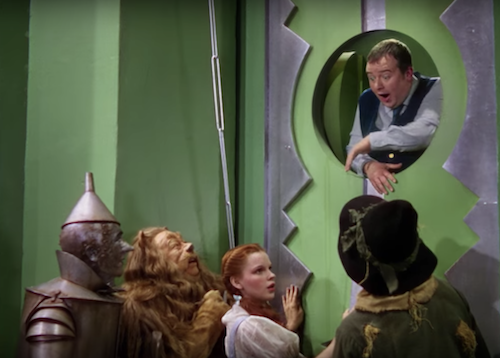 Halifax have been playing with iconic characters for a while now; recent examples include the Flintstones and Top Cat- but this is the first time they’ve used a film. The phrase `No Place Like Home` is of course prefect fodder for a bank offering mortgages and the ad’s technical work is exemplary splicing the modern footage into the film clips and giving them the same film stock look.  The Halifax bloke aka Greg is played by actor David Rees Talbot and not a real Halifax employee like Howard was. His parts were filmed in a London tv studio and then superimposed during a lengthy post production process into the original film. This was presumably trickier to do than superimposing cartoon characters into modern action as the previous ads did. The ad was made by director Declan Lowney for adam&eveDBB. In the company’s promotional materials marketing managing director Catherine Kehoe states somewhat bizarrely;”What better place to showcase Halifax’s expertise and heritage in helping the nation’s homebuyers than the Emerald City.” Does she realise it’s not actually a real place?


Some ads are informative, others decide everyone knows the product or business and proceed without explanation. The Postcode lottery advert assumes we all know exactly what this entails and show us a montage of people in red jackets surprising members of the public with cheques that are large in both size and value. All the while the old Wings tune `Let Em In` is circling like an eagle even though the red coated people don’t actually go into the houses so don’t need to be `let in`. Instead the winners are obliged to come outside and join in a little amateur movement and chorus of the song itself presumably selected as it opens with the line “someone’s knocking on the door”. Whether all winners are subject to this filmed shenanigans is not known.
All the time I’m wondering when they’ll explain what this lottery is but they never do. The ads been running a while now and are frequently updated to show new winners and a mention of when people have to register to be in the next draw. The presenters - or ambassadors as they’re grandly called - are a gaggle of relentlessly cheery shape throwing daytime tv personalities. There have been accusations that some of the winners shown are also actors but this has been denied.
`Let ‘Em In` was of course penned by Paul McCartney and recorded by Wings on their 1976 album `Wings at the Speed of Sound`. However the ad uses a 1977 cover by Billy Paul. The People’s Postcode Lottery to give it the full name is subscription based with Players paying monthly in advance.  The winning numbers are based on postcodes so if one person in the street has a winning ticket all the people who bought tickets in that street also win. The money from the lottery is given to trusts to distribute to charities.
Here's a typical ad, altogether now "Someone's knocking down the door...."