[32] Modern Romance: Best Years Of Our Lives. Modern Romance are in their pomp. Six of their eight songs have started Top of the Pops since they first appeared in September 1981. There were other, bigger, and better groups but no one else was so clearly favoured by the show. Watching Modern Romance perform Best Years Of Our Lives you can see why. It's sets the mood of the programme; fast paced, energetic, and a chance for the crowd to cut loose and show they're all having the best possible time. I just wish I liked Modern Romance. How do all their songs manage to be both bland and earworms?

[6] Daryl Hall & John Oates: Maneater. On video. Ooh, let's play guess the contents of the video; slinky model in stilettos, check; big cat, check (it's a panther this time); cross-cutting between the model and the big cat, check. What's missing? Well the big cat snarls at the camera but the director forgets the de rigueur shot of the slinky model clawing at the air. And for bonus points, she should really have been stood in front of a big fan at some point so her hair and clothes can be blown around in slow motion. Top of the Pops fades the video at the saxophone break so maybe that all happens in the second half. 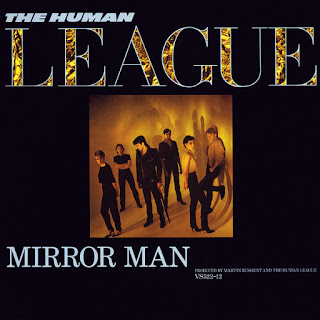 [9] The Human League: Mirror Man. The Human League are back with their follow-up to Don't You Want Me. The defining sound, and big Christmas single of 1981. Here they are to do the same thing in 1982. What can possibly go wrong? Also, watch the keyboard player in the tan jacket. It's the most bored and disinterested performance I've seen for a while. Yes mate, you may only have a simple keyboard riff to play, but at least try and pretend to be engaged. And take your other hand out of your pocket.


[13] Duran Duran: Rio. Duran Duran on the other hand seem delighted to be back in the Top of the Pops studio. There's a lovely moment in the instrumental when Simon Le Bon makes the other band members laugh by pretending to do the bird song. Watch out for the moment just after the saxophone finishes when the director tries to go for a swooping crane shot. The camera dives into the crowd but Floor Manager Tony Redstone doesn't seem to be on hand to drag the audience out of the way. People in the crowd gradually realise that something large and terrible is creeping up behind them and there's lots of backward glances, and people shuffling forwards. The end result is marginally less epic than Producer Brian Whitehouse was probably hoping. 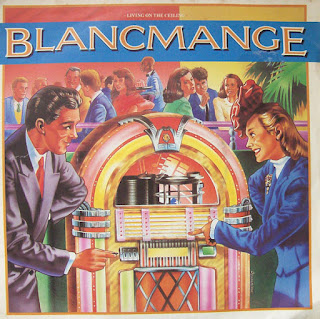 [12] Blancmange: Living On The Ceiling. I was going to make some fatuous point about the music industry's gradual progression from Third Worlds' 1981 song Dancing On The Floor, to Living On The Ceiling, to Lionel Richie's Dancing On The Ceiling in 1985. Instead I'll just note the way Designer Jo Day has made the Human League stage look more exotic by adding a couple of prop palm trees; if you look carefully during the performance of Mirror Man you can see one of the trees sitting incongruously to the right of the stage.


[24] Renée & Renato: Save Your Love. Look everyone 1982 has played it's Christmas joker. Renée & Renato are going to be in the charts for a few weeks, God bless 'em, so for the time being I'm going to restrict myself to recommending you watch Kenny Everett's spoof on Youtube. Renée & Renato appear on film. For some reason they never turned up in the Top of the Pops studio.


[10] Wham: Young Guns (Go For It). Repeated from the 04/11/1982 edition. This show was skipped by BBC4 so this becomes Wham's first appearance. It's great. Although I remember not much liking it at the time. "Hey sucker" seemed a rude way to speak to someone, and I was confused by a song with so much talking rather than singing.


[1] Eddy Grant: I Don’t Wanna Dance. On film. Top of the Pops seems to be running long this week so the credits play out over Eddy sitting on a raft while his girlfriend stamps around on the beach.

Reviewed by Chris Arnsby. Peter Powell: "Hello! Welcome to another edition of Top of the Pops! On tonight's show we've got a brand new number one! We've got some of the... best... names in the chart at the moment! And let's get this straight from the start Dexy's!"
[35] Kevin Rowland & Dexy's Midnight Runners: Let’s Get This Straight (From The Start). Peter Powell's introduction ends with an odd wipe that hides a cut from him to Dexy's on stage. Normally at the end of the introduction the camera pulls back from the presenter to the band in a single shot. Did something have to be edited out? Or is Top of the Pops in a different studio without as much space for big swooping camera moves? The set looks truncated. It's getting close to Christmas. Maybe Top of the Pops got bumped to a smaller studio while a Christmas Special was recorded.
[2] The Human League: Mirror Man. There's a strange man standing next to Peter Powell. (John- Is it the Mirror Man then?) Not the one in the Imperial Stormtrooper mask at the back of the crowd, the one wearing a nasty white Radio 1 jacket. It's Gary Davies. Yes folks, wunnerful Radio 1 is extending it's broadcasting hours from Saturday 4th December and Gary Davies is one of three new DJs being brought in to handle the extra time. His new show starts on Saturday in the prestigious 10pm slot. Luckily there'll be lots to listen to as he's "into most music actually." We learn this in one of Top of the Pops patented 30 second interviews. Then it's The Human League repeated from the 18/11/1982 show.
[34] Whitesnake: Here I Go Again. Now it's Janice Long's turn to wear the vile Radio 1 jacket. We learn that she's in the slightly more prestigious than Gary Davis 7.30-10pm Saturday slot. Keep an eye on Whitesnake's keyboard player. When he gets into the song he likes to rock the keyboard backwards and forwards in a way which looks very alarming.
[37] Bucks Fizz: If You Can't Stand The Heat. Finally it's Pat Sharpe's moment to shine. It turns out the new DJs haven't been swapping the same jacket among themselves. They've all been given their own monogrammed jacket in a shocking waste of licence payer's money. Still it probably stops David Jensen nicking them. 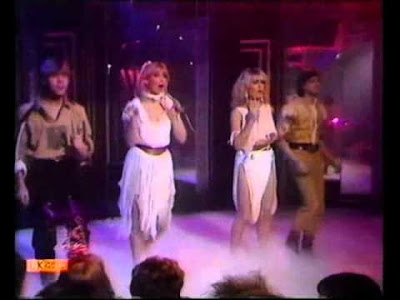 [17] Madness: Our House. On film. The shot of Madness sitting at the long boardroom table and reading newspapers was taken on Thursday 7th October. This date was discovered following computer analysis of the front page of The Times; the photo is Sidney Weighell who had shockingly resigned as General Secretary of the National Union of Railwaymen the day before.
[18] Modern Romance: Best Years Of Our Lives. Have Zoo and the audience cheerleaders been at the BBC Costume store? Standing behind John Du Prez is a man wearing what looks like one of Avon's old black and white costumes from Blake's 7 and one of the other dancers is wearing a red and white padded affair that looks a bit like a Tesh costume from the Doctor Who story The Face Of Evil.
[10] Duran Duran: Rio. The impossibly glamorous promo filmed in Antigua. Not to be confused with the impossibly glamorous promo for Save A Prayer which was filmed in Sri Lanka. It wouldn't do to use the same island paradise for two songs would it? 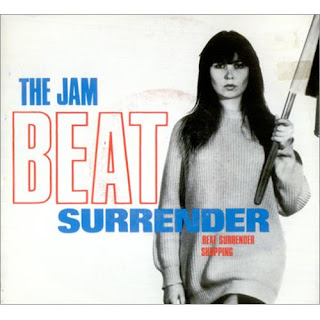 [1] The Jam: Beat Surrender. The Jam's final single. Peter Powell is determined to make sure the audience appreciate the history of this monumental moment. "What a way to finish a fantastic career," he says in his serious voice while introducing the song, and reminding us at the song's end "what a way to close a career." I just wish I had something to say about it.
[3] Wham: Young Guns (Go For It). There's a charming moment long after the credits have finished, so it was probably never shown on BBC1 unless the schedule was really under running. On the line "I remember when he such fun and everything was fine" the camera cuts to a woman who is absent mindedly watching the studio monitor. It takes a second before she registers that she is now looking at herself on screen and when she does, she starts dancing with a delighted shriek.