The end result is the kind of Doctor Who story that was becoming increasingly prevalent in the later 1970s. Darker concepts, adult references and serious ideas sit sometimes uneasily amidst falling production values. The budget is stretched- ironic I suppose given the fiscal subject matter- so the Plutonian locations never look like the same place. Then there are sets that appear to have been designed not to look real at all; all large orange and yellow coloured blocks and behind the Collector what should be a huge circuit board looks like photos of circuit boards and he just doesn’t seem to be the type to decorate his workplace with pictures.


There’s an alternative epic struggling to escape from this story which in the end, just like the seeds of the revolution depicted, takes place largely off screen. Six manufactured Suns powering a terraformed Pluto is a terrific concept only on screen it just looks like a wet Wednesday on a factory roof.  Six Megropolis cities teaming with workers toiling to maintain the environment for just a few Talmars a day yet we never so much as glimpse any work. You know `The Sunmakers` would make a great large scale drama but as it is we have to be content with a small scale uprising initiated by the Doctor at his most proactive. Of course it helps that there’s a ready band of would be rebels lurking in the underground. You can tell who they are as they never wash and are very growly whereas by contrast the workers are pacified by a percolating supporting air conditioner that saps their will though not their strength. 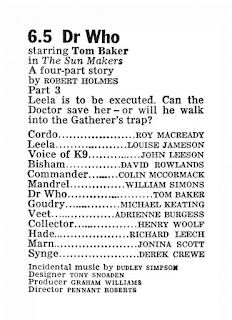 The story is sketchier outlining exactly how the Company came to such control – whoever awarded the tender for Pluto has questions to answer – preferring to set its stall a long while into the scenario. We open with Cordo, a small man cowed further by the large sets and the bamboozling verbosity of Gatherer Hade who is unsympathetic to this Grade D worker's inability to pay death taxes. As a result, Cordo goes to jump off the nearest roof.


This is the first of several aspects of the story that are far darker in intent than the somewhat broad, often frivolously played story suggests. Holmes peppers the dialogue not just with corridors named after tax forms but with stinging examples of the way taxes are used as a far more effective way of keeping people in their place than a show of force. The suppressing air does the rest. Later scenes when the Doctor and Leela first encounter the underground dwellers are as hard as 70s Doctor Who got and bring out the very best in Louise Jameson. Leela’s warrior is actually well equipped to deal with this band and the scenes where she and they goad each other (at one point she threatens to fillet someone!) are some of the best in the story. Then there’s the steaming scene which reveals the Collector’s sadistic delight at hearing the screams.  Yes this is a dark story alright.


To counter this the group that gradually assemble to take on the Company have more personality than most similar ones in the show. Cordo goes from downtrodden to euphoric as matters develop. Bisham, whose scenes with the Doctor provide the technical backbone of the story, is lighter relief and Mandrel’s initial hostility turns to practical help as things progress. Budgetary issues mean it’s a small scale revolution but the story uses screens and announcements to keep us in the picture- amusingly the Doctor himself utilises the same tools to push things forward by rigging up a false public announcement. 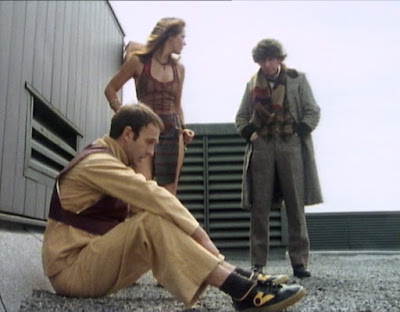 Holmes mix of the macabre and the amusing comes together with the Company’s higher echelons. Richard Leech’s Hade is a pompous hot air bag of an official drawn straight from a Dickens novel and given government tax babble to spout. Its an expansive performance that grows bigger as events develop; Hade’s reaction to the news that he will pay for something from his own wallet is the funniest moment in the story.  Also to be enjoyed are his increasingly grand salutations to the Collector. Henry Woolf’ inhabits the same crossroads between being jokey and serious. With minimal make up other than a grey pallor, Woolf hunches his body and uses an odd voice to become the machine like, heartless Collector and adds a chilling tone to proceedings.


It is in the end easier to admire `The Sunmakers` than love it. There is something that doesn’t quite spark and it may be that everyone is trying too hard to be clever and witty and forgets to have an adventure. The staging and direction hardly help – save for one shot that swings around the side of a corridor, Pennant Roberts films without inspiration using too many wide shots and awkward action scenes. The locations don’t seem to match with each other and even less than other stories of this period it is hard to reconcile the studio sets being in the same place. 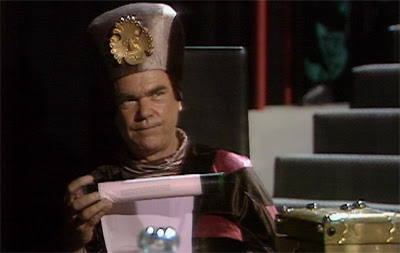 Even Holmes seems to lose interest three quarters of the way through. Having built up his Company and their regime the events that topple it are too easy, too rote and this is personified by the way both the Gatherer and Collector are despatched. I find the former’s demise somewhat disturbing (especially as everyone cheers afterwards)  suggesting a rough justice that ill fits a fledgling new start. Or is that Holmes’ point? As for the Collector you’d think he’d have some final surprise to protect him but he just goes down the plughole. Unfortunately this reveals his chair looks just like a commode!


I do think there was potential here to expand this story to five parts and make the struggle harder, the losses more sustained and also take an un-needed episode away from the later `Invasion of Time`.  `The Sunmakers` is in some ways the most ambitious story of this season yet also the one which seems the simplest because the bleak scenario that Robert Holmes sets up is never fully explored and too easily resolved. 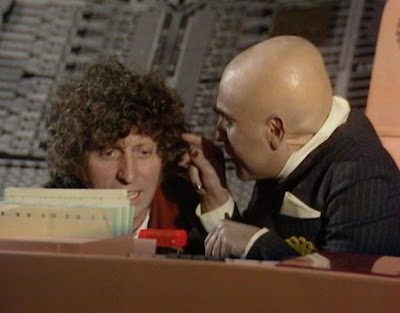 
·   #Discovered in 1930, Pluto was initially classified as the ninth planet in our solar system, However in 2006 it was downgraded to become a dwarf planet by the International Astronomical Union. There have been periodic rumours of this decision being reversed and a number of scientists have lobbied, so far unsuccessfully, for that to happen.


·  #The image in the circular symbol associated with this story which all the characters wear does bear a resemblance to that of a Zygon face leading to rumours in 1977 that they would be unveiled as the owners of the company. However there is no mention in the story to suggest what the image depicts.


·  #The story’s origins lay in writer Robert Holmes’s animosity towards the UK government’s Inland Revenue service with whom he had clashed over the amount of income tax he was having to pay as a freelance writer. His particular frustration was with the complicated system he had to navigate to pursue his claim. He had peppered the story with tax references notably P45, the form completed when a person’s job is terminated. Some of these had to be removed.


·  #Another source said to have inspired the sci-fi elements of the story is the book `The Iron Sun- Crossing the Universe Through Black Holes` written by Adrian Berry which included the idea of man- made Suns.


·  # There is a sort of never proven alternative companion theory at this period in the show. As both have later confirmed Tom Baker’s attitude towards Louise Jameson was not especially cordial and she was also disappointed by the character’s lack of development. Various fan sources have claimed that there was a plan to write her out of this story – possibly even having Leela killed during the steaming – though there seems to be no official account of this. It does however tie in with newspaper stories around the time suggesting that `Underworld’s Imogen Bickford Smith was to become the new companion. 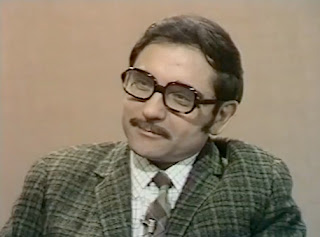 A memorable performance as the Collector with a penchant for steaming happened during a busy period of Henry Woolf’s career. Born in 1930 one of his school friends was playwright Harold Pinter who along with other members of `the Hackney Gang` grew up in the difficult climate of the 1940s. Their friendship lasted until Pinter’s death and it was Woolf, when on a course in Bristol in 1957, who commissioned and directed Pinter’s first play The Room.


Woolf’s early career in the Sixties was spent in the theatre acting in various companies as well as in touring plays. He has had roles in a number of films- including The Rocky Horror Picture Show and Gorky Park - and on television was a regular on ex - Monty Python Eric Idle’s series Rutland Weekend Television and also had a recurring role in Steptoe and Son.


Since 1978 he and his wife Susan (whom he married in 1965) have lived in Canada where from 1983 he joined the Drama department of the University of Saskatchewan eventually becoming the head of the department until retiring in 1990. He has since remained active in the Canadian acting world- in 2003 he directed an all- female version of Twelfth Night at the University of Winnepeg.


His long friendship with Harold Pinter featured prominently in Woolf’s memoir `Barcelona in Trouble` in which he describes how in the Sixties he had to take long bus trips while Pinter and actress Joan Bakewell carried on their affair in his flat, later included in Pinter’s play The Betrayal. Woolf has continued to appear in revivals of some of Pinter’s plays including The Hothouse in 2007 and this year in a production of Spider Love in London’s British Library.

NB Reviews of Horror of Fang Rock, The Invisble Enemy and Image of the Fendahl can be found at www.timelinesdw.blogger.com 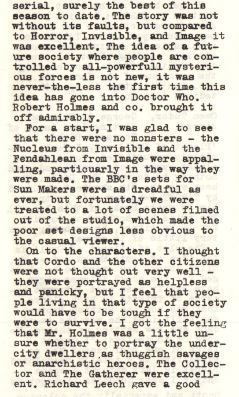 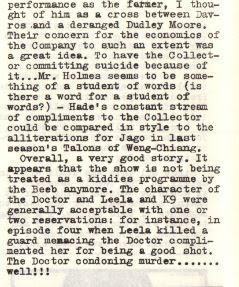 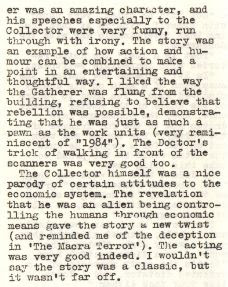 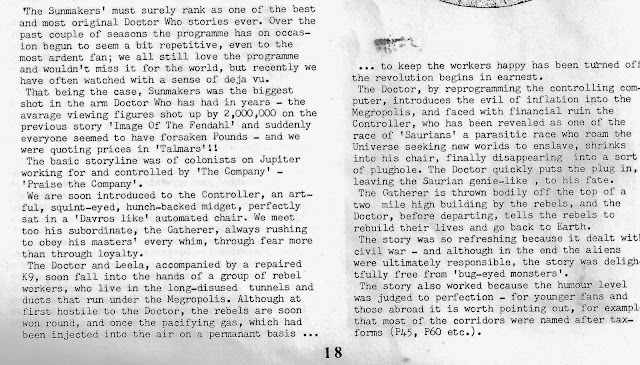 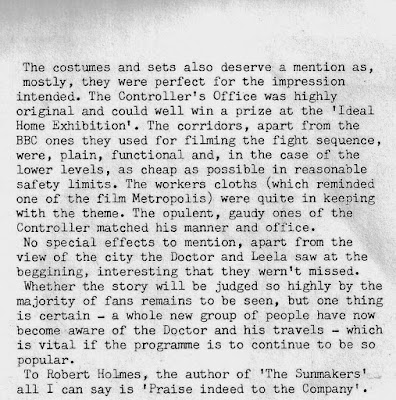 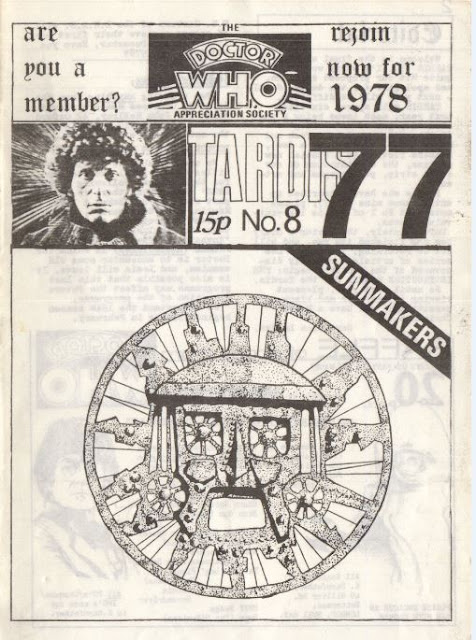