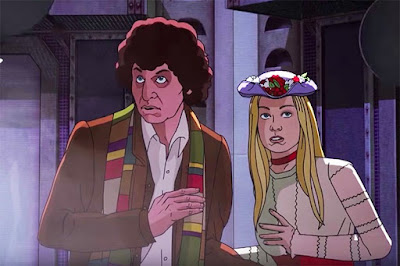 For some reason this latest release has been edited together as a near two and a half hour feature which highlights the fact that very little at all happens in the first half hour. This is the part of the story where filming was nearest to completion so presumably more or less how it would have been broadcast but part one as was is very sluggish. It opens with an interminably long scene in some sort of sleeping chamber where the story’s villain Skagra wakes up then makes sure his fellow sleepers don’t. As a grab for uncommitted viewers it would certainly have found them switching channels. Then for the next 20 minutes or so the Doctor and Romana are chatting while punting on the River Cam, Professor Chronotis is being the dotty scientist as a student tries to borrow a book while Skagra wanders around Cambridge carrying a bag and with nobody noticing his outrageous clothes.
The story finally gets going when it seems the book has unusual molecular qualities and it is this mystery that both the students and the Doctor and Romana are following for the next stage. It is fantastic to see Tom Baker, Lalla Ward and guesting Dennis Carey delivering Douglas Adam’s witty light dialogue but on the other hand very little of it pushes the story on. At times it feels like we’ve dropped in on the Doctor just hanging around rather than doing anything much. Had the other sequences been more adventurous perhaps this wouldn’t matter so much. Another factor in how you enjoy this will depend on your reaction to Time Lord myth. I know some fans groan at every mention of Gallifrey but I feel Adams does keep a good balance here adding something new without treading all over what’s previously been established. 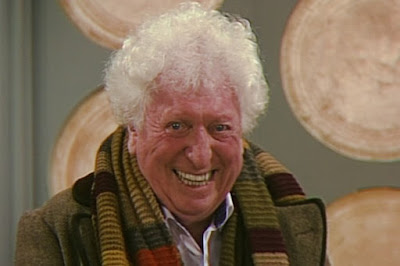 The cast are clearly enjoying themselves with Tom and Lalla on top form and Dennis Carey in particular a lot of fun as Chronotis. However the tone is very much of its time so that some of their exchanges come across as exactly the sort of highbrow middle class approach to the series which the modern show tries to avoid. Adams does repeat some of his gags and though you may find the conversations charming, others may find them uninvolving. They are very much the meat of the story too because once we get to the actual plot- which is probably somewhere around what would have been part 3 - its very much your standard stuff hindered by awkward geography- everyone seems to be walking around from one place to another! There are some lumbering monsters - the Krargs - that are better than the Nimon….but not by much and the supposedly futuristic spaceships look tacky. Skagra as portrayed by Christopher Neame is an archetypal 70s villain but lacks the smart touches that make the likes of Harrison Chase or Marcus Scarman so memorable.
The animation is good with strong impressions of the characters without slavishly trying to capture exact likenesses and excellent use of colour though struggles to convey movement. One thing that does work better than you'd think is using the cast's voices as they are today for these scenes. Seeing it interspersed with live action in studio on video and location work on film makes for a somewhat disconcerting experience though. It does look as if they’ve treated the studio footage with something to make it a closer match for the outdoor filming but they don’t use that for the animation. I have to say that during the last half hour I was getting bored by the story because the writing creates a threat and concepts that don’t appear to affect anyone except the people involved. In the end it feels like watching a party you haven’t been invited to. However if you stick with it to the end the cherry on the cake is a lovely scene featuring the present day Tom Baker once again in scarf and coat in the Tardis.