Guest Post by Chris Arnsby
BBC4: Top of the Pops 1979 13/12/79
Mike Read, "Well the week's flown past. It's Top of the Pops again, and here's David Bowie to sing over the chart run down."
The 1979 Top of the Pops repeats stutter to an end. Two December shows are unrepeatable; a regular edition for 20/12/79 presented by J**** S*****; and a post-Christmas special from 27/12/79 with D*v* L** Tr*v*s and Mike Read. The Christmas Day special presented by Peter Powell and Kid Jensen goes out on BBC4 on Christmas Eve. Looking over the skipped editions reveals no significant omissions although we do miss a chance to see Legs & Co dancing to Mike Oldfield's Blue Peter theme. If you must see it, it's on Youtube. They're dressed as sexy sailors, natch. Oh, while you're there watch Simon Groom's Blue Peter report on the making of the theme.
Chart music: David Bowie, John I’m Only Dancing (Again) [23].
Fiddler's Dram: Day Trip To Bangor (Didn’t We Have A Lovely Time) [26]. Fiddler's Dram crop up fairly often on worst-of-the-top-ten-novelty-one-hit-wonder lists so they didn't give me the traumatic unpacking of memories I experienced when The Ramblers hit the charts. Also, this is a song I remembered from the inevitable spoof by The Barron Knights ("Didn't we have a lovely time at the office Christmas party"), and it's one I remember liking at the time. It's not necessarily a bad song (I'm trying to choose my words with care here), it's simple, and catchy, and doesn't sound like anything else in the charts, so I can see why it would have caught my attention as I moved up from being a Boney M obsessed eight year old to an Adam and the Ants obsessed nine year old (with a brief detour on the way to run around the playground shouting "Hey! Teachers! Leave them kids alone!"). Watched now the tune is still a weapon grade earworm and I find my eye drawn to the bloke with the perm so enormous that all he can do is shake his head from side to side.

Paul McCartney: Wonderful Christmastime [20]. This may actually be a worse song than Day Trip to Bangor. Where to begin? The plunking synthesiser? The sleigh bells? I'm going for the choir of children who, according to Paul McCartney, have "practised all year long," and yet can't sing anything better than, "Ding dong, ding dong. Ding dong, ding dong. Ding dong, ding dong." Bilge.
The Tourists:  I Only Want To Be With You [4]. A song that has grown on me after hearing it a few times.
Abba: I Have A Dream [21]. Wet. Not one of Abba's best.
The Beat: Tears Of A Clown [31]. A really infectious (in a good way) ska cover of the song by Smokey Robinson And The Miracles. "Tears of a clown," says Mike Read in a faux-Jamaican accent at the end of the song. The road to UKIP Calypso begins here.
Status Quo: Living On An Island [18]. A very special Christmas present from Flick Colby to you. In cahoots with L. Rowland-Warne from the Costume department and Humphrey Jaeger in Design she's created a routine for Legs & Co which features famous ladies from history. Living On An Island>The British Isles>Legs & Co>Famous ladies from history. Do you see? There's Britannia herself (Lulu is clearly not dressed as Boudica like Mike Read claims, the clod), Guinevere, Queen Elizabeth, Florence Nightingale, Amy Johnson, and Mary Quant. Wot, no Thatcha?
The Inmates: The Walk [60]. How come the drummer is allowed to not wear his jacket?
Blondie: Union City Blue [13]. Not Blondie's greatest song. (John- It’s one of their best though surely?) 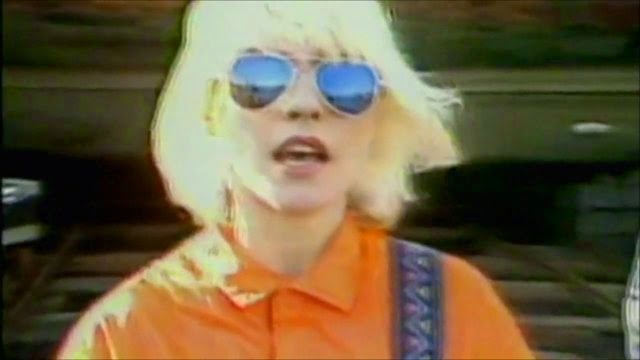 The Barron Knights: Food For Thought [63]. Gone from both the early evening and late night repeat. A spoof of three songs, Lucky Number, Pop Muzik, and If I Said You Had A Beautiful Body Would You Hold It Against Me. It's been edited out because The Barron Knights version of Pop Muzik, Chop Suey, contains all your favourite stereotypes; the lead singer screws up his eyes in a myopic oriental squint, he mixes up L's and R's "London, Blistol, Ipslich, Ripley everyone eating aah-ha chop suey";  the lips get pulled back to imitate that hilarious bucktoothed look popularised by Mickey Rooney playing I.Y. Yunioshi in Breakfast at Tiffany's; then there's this bit, "all around the world. I think it's a shame. All them little Chinamen. Well, they all look the same," *hands up to the side of each eye to pull them into slits*. All that said, I'm not sure excising it from history is entirely the right idea. By all means edit it from the early evening repeat, but keep it in the late night repeat and let people see what was considered family entertainment between Tomorrow's World and Blankety Blank at 7.20pm in December 1979. Blimey, that got serious quickly. Sorry about that. At the end of the performance Mike Read says, "myself, I prefer English." We know Mike. We know.
The Pretenders: Brass In Pocket [30]. I clearly remember this song so I know I would have been watching this edition of Top of the Pops. I know I also found The Barron Knights hilarious. Oh well. Time makes fools of us all. I hated this song by The Pretenders when I first heard it. There was something about the line "I'm special, so special" which really annoyed me. It seemed very boastful.
Number 1: Pink Floyd, Another Brick In The Wall (Part 2). Still sounding fantastic and bleak. It's a song which always reminds me of Ghost Town by The Specials. Musically they couldn't be more different but they both carry the same doom-laden tone. Also, the kids from this promo film could duff up The Ramblers without difficulty.
Closing titles: Rose Royce, Is It Love You’re After [24].
Performance of the week: The Beat: Tears Of A Clown.