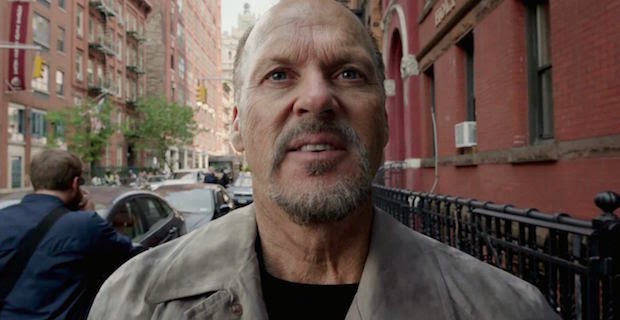 Riggan Thomson is an actor who once headed up the Birdman superhero franchise. That though was more than twenty years ago and now he is on the fringes of the profession where he is always trying to convince himself it is a conscious choice rather than circumstances outside his control. We join him at heated rehearsals for his stage adaptation of a Raymond Carver story. An initial run through ends up with the lead actor being knocked out by a falling paint pot. The viewer sees it as an act of teleportation that Thomsan causes to happen. There are several of these during the film, part of our trip into hismind though the camera work suggests it is really happening. We also hear his inner voice, a dark unsettling one that later turns out to be that of his famous character Birdman. You wonder if the gravelly tone is a deliberate tilt at Christian Bale’s similar Batman voice. The play goes on anyway with a replacement lead actor in the form of method actor Mike Shiner whose working methods cause havoc and gradually unsettle Thomson as opening night approaches.
The film gains extra traction by way of Michael Keaton, himself a former superhero and this adds another level to a narrative that often appears to be as much a comment on actors and acting than anything else. Amongst the highlights are arguments about the difference between film and theatre actors and a deliciously bile filled rant about critics who “label” everything. In many ways though entertaining it doesn’t give too pleasant an impression of thespians and their efforts while the two scenes we frequently view from the play make it out to be quite a clunky old thing.
There’s plenty to say about the effects of fame, with constant references to Twitter there is no doubting when the film is set but more telling perhaps are the scenes when Thomson is outside the theatre constantly harassed or angry as if he cannot survive without a script. At times Birdman is pure farce albeit a chaotic one rather than say the richly calibrated lies of The Grand Budapest Hotel, one of its rivals for Best Picture Oscar this year. Sometimes you feel that it might have been a better film had it gone for the more obvious route because actors are really quite annoying people to anyone except actors. On the other hand the comedy offers some relief from what would otherwise be a portrait of a man unravelling. All this is laid out in lengthy scenes and transitions often punctuated jazzy drums which is an interesting though at times distracting choice.
Perhaps the most unusual aspect though is the way Birdman is presented as if one long continuous shot. Superlative editing – which the Academy Awards people don’t seem to have noticed-creates a coherence that suits the dialogue heavy scenes. Even the night into day transformations do not break the illusion that like a play we are watching a continuous real life production rather than one which was made over several weeks. This conceit does rather have the effect of making you look for the joins (I spotted only one) which might have been sublimated where the cameras not so busily drawing attention to themselves.
The other main attraction is Michael Keaton himself. Always an edgy performer he draws in various traits we’ve seen in other roles veering from manic to blissful;, from anger to resignation always holding the screen. Nowadays he appears to do less- remember his hyper-active Beetlejuice- and is the better for it. There’s one ridiculous scene where he has to walk around the block in public that he makes work because of his facial expressions alone. It’s my favourite bit of the film.  Indeed his performance is so layered that he is able to overshadow even Edward Norton who nonetheless makes a fine foil. Necessarily obnoxious Norton’s Shiner is easy to dislike but provides some comedic moments.
As the play nears opening you wonder how the film will conclude and it seems to do so twice. Inviting full on fantasy sequences in suggests we are getting an uplifting conclusion but this is undercut – courtesy of a brilliant visual gag - in favour of a curious final ten minutes which leave matters somewhat open. This latter bit stretches the film a little though is ultimately more in keeping with most of what has gone before. In the end it’s hard to reach a conclusion about Birdman but if you like something different as well as a career best performance from Michael Keaton bold it’s well worth a look.