Up-words - It's Time for Doctor Who

Up-words features the best of the articles from This way up when it was published as a print fanzine from 2002- 2010.
It’s Time for Doctor Who / John Connors / June 2005

Imagine you’re a Doctor Who fan. One day in the 1990s someone appears from the future (and, hey, he might be a bit Northern with prominent ears and a black coat, you never know) and tells you that your favourite telly show will be back on air in 2005 and not only will it be great, exciting, terrifying and epic but it will be a ratings trouncing success, the serious critics will rave and even people who previously thought it was all silly wobbly set laden kids stiff will swoon when they catch an eyeful. There will also, he adds with a twinkle in his eyes, be Daleks, millions of them. “Fantastic!”  It sounds like something that could never happen but here we are in 2005 and it has happened. It were never been like this in the old days when effects were rarely special and Daleks were mostly cardboard cut outs and fans existed in their own enclosed world. A short write up in the `Radio Times`, the odd snippet wedged in the midst of a big `Saturday night on BBC1` trailer and that was your lot in the halcyon days of the 70s. Doctor Who, however successful it was, never had the cachet it has right now.
Throughout its run, this new series was constantly placed in the top 20 shows of each week, with audience shares that remained consistently high at around 35 -40% despite fluctuating ratings and was the most watched home grown drama series of the first half of the year. More than that it saw off direct opposition with such finality that ITV eventually gave up and started showing any old film instead. With average ratings of almost 8 million there is no doubting that the series is now more commercially successful than ever before. In these days of multi channels and declining overall audiences its roughly the same as if 70s Doctor Who had been watched by 15 million people each week, which it certainly wasn’t. Yet until February 2005 there was little sense of what was to come after an 18 month production schedule that had seemed to go on forever.
Then, all of a sudden things began to lurch into gear with all the ruthlessness of an invasion. There were trailers for weeks beforehand (even `special` trailers, reserved for the most identifiable and big shows). Public billboards sat proudly overlooking roads and railway stations proclaiming simply the time and date of the new series together with an enormous photo of Chris and Billie. `Radio Times` went into overkill mode talking up the series three weeks before transmission and spoiling us with a fold out TARDIS cover in the week itself. After that, it cleared space for a feature every single week. The tabloids had already been indulging themselves since last summer, speculating on the travails of Billie Piper’s marriage and sneaking onto sets to get not particularly exciting pictures. Now the broadsheets tuned in, offering enthusiastic previews written as if they were intellectualising when you knew they were actually playing Daleks on the office chairs!  Needless to say Internet activity was legion; Outpost Gallifrey in particular logged and reported every nuance of news, gossip and speculation with feverish anticipation while the BBC themselves came up with a marvellous official site. Transmission of each episode was followed on BBC3 by Doctor Who Confidential, which mixed behind the scenes stuff with glances back at the old series. Fans, as ever, debated every morsel and millisecond of each episode; a feeding frenzy after fifteen years of meagre pickings and Rose itself was leaked onto the internet three weeks prior to transmission by a plucky Canadian fan who subsequently lost his job for his trouble.
In the week before broadcast began, television went Doctor Who crazy! Billie was on Parkinson being very chatty while Chris E was on Jonathan Ross and seemed nervous, perhaps because he was carrying a big secret. BBC2 weighed in with a `Dr Who Night` which was actually only about two hours, but included a documentary repeat and a Doctor Who Mastermind in which the person who knew least about the series won and Chris was already talking about the show in the past tense- a big clue we missed at the time. The 60s Dalek films were shown and both a Culture Show feature and Newsnight Review spot aired in the week leading up to the start of the series. Plus, if you want undeniable proof that the other channels would dearly love to have resurrected the show themselves, check out the films on Friday 24th March – Nicholas and Alexandria featuring Tom as Rasputin on ITV and One of our Dinosaurs Is Missing with Jon Pertwee on Four. No fan can remember a time when Doctor Who was so important and so feted and so…now! There was a palpable buzz about it all, something suggesting this was far, far more than just the relaunch of a once popular telefantasy series. There was a sense that this new Doctor Who did not so much have to succeed; rather it would have to fail spectacularly. You felt that the BBC really did see it as a flagship programme, which contrasts vividly with the way they tried to bury it during the second half of the eighties. Yet at the back of our minds, there was a sense of caution; surely something would go wrong? 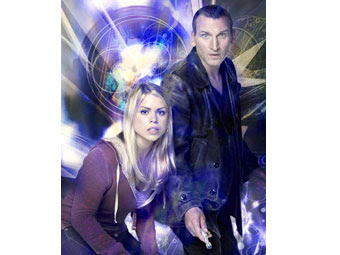 Watching the opening few minutes of Rose– themselves a modern stylish blur- you couldn’t help feeling a little nervous for the programme and all it meant. Yet once Rose made her run into the TARDIS the programme would never mean quite the same thing again. The popular –if inaccurate – iconography that surrounded it was reshaped forever after just 45 minutes and now Doctor Who is hip, modern and most definitely fun. The sets don’t wobble, the effects aren’t cheap and not everyone is acting in the Queen’s English. Naturally other things have been lost as well but it’s important to mention that the absolute essentials- the things that have always been there – remain. I’m not just talking about the central character, the companion and the TARDIS, rather the sense of good overcoming evil, the moral tone, the `fear factor` as the BBC website has dubbed it and, crucially, the way the series reflects it’s television surroundings. Fans shocked by the stealth and relative gloss in this new look version have not been paying attention to the way that television has developed. Whether for the better is not the matter at stake here, but if you pick any old story at random, you’ll find it, too, is of its time. In that respect it would have been more unusual if Rose had been any different to the way it was. Like football fans and paid up members of political parties, Doctor Who fans do really love being annoyed with the object of their fervour; they are possessive and each of them really feels they know best how it should be made.
By mid season, however, we’d grown acclimatised to this new style and the changes it had brought. The incidental music for example seems much more integral than it used to with something like 90% of screen time featuring some musical adornment. Whereas it used to be there to underpin danger or terror, the music is now part of the canvas and Murray Gold’s approach gradually made sense once you get used to it. There was always something odd about the programme’s music anyway; listen to how horrible all that 70s electronics sounds today. Gold produced an eloquent score, full of surprises and with an urgency to match the pace of the production. While technically good – for example the themes from Rose pop back in new forms in The Parting of the Ways – it is sumptuous to listen to and something of a triumph.
Visually things were astoundingly good; with a big budget and a new generation of technical and design people nothing seemed beyond their reach to the extent that Downing Street was blown up and the centre of Cardiff suffered an earthquake. The monsters, old and new, were excellent. Daleks and Autons have never looked better; the former given a look that really implies metallic heavyweights, while the latter had a wonderful creaking sound when moving. The new crop lived up to the series’ tradition, especially the Slitheen with their weird blinking eyes and claws. The aliens assembled for End of the World were an especially impressive collection each of whom would have merited a 4 part story of their own back in the day; in particular it was a shame that the Moxx of Balhoon was seen so little as it was a tremendous costume in every respect.
The 45 minute format shows a programme made for the dvd age where you need to see it more than once to absorb all the nuances; for example it took ages for anyone to start noticing the Bad Wolf references. Unfortunately this fast style has come to be regarded as superficial by some people but one of the key strengths of the revival has been the way it plays to multiple audiences; showering the younger viewers with action and colour, delighting the older viewers with innuendo and contemporary references and ensuring fans see enough of the essence of the show to feel at home. It was said before transmission of the series started that the family audience does not exist in 2005 and that may well have been true up till March but the biggest legacy of this series could be to revive the idea of families watching together instead of vanishing to all points of the home with their own screens. 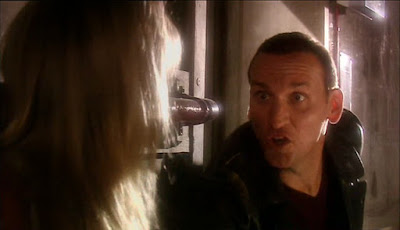 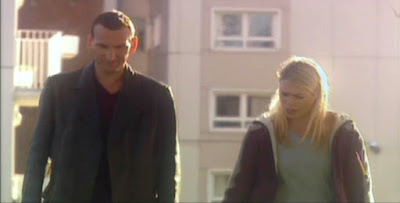