The story so far: There are 52 episodes of Blake’s 7 and 52 weeks in the year so a group of us are watching an episode a week....
This week: Season Two Episode 5- Pressure Point
(1979) Writer: Terry Nation / Director: George Spenton- Foster
Blake persuades the others to reluctantly go along with a daring raid on Control, the Federation’s notoriously inaccessible central monitoring system on Earth. However his decision leads to tragedy for one of the Liberator crew.
Sometimes, ol’ Terry Nation does hit the spot. `Pressure Point` jangles with the tension hinted at last week as the crew argue over the ramifications of Blake’s plan to strike at the heart of the Federation. We see a more fanatical than ever Blake, who manages to get them to Earth before even revealing his plan which he presents as a fait accompli. The subsequent arguments draw out the differing viewpoints of the crew, suggesting that the usual bickering masks even greater divides. While flawed heroes are nothing new in tv drama per se, a lot of telefantasy of the 1970s was filled with simplistic archetypes with none of the grey areas writers prefer to explore these days.  If the others seem to capitulate to Blake’s idea a little too easily Nation isn’t finished tricking us yet. It’s as if he is gleefully subjugating his own storytelling traits culminating in a double whammy at the end.
The invulnerability of Control is built up so well that neither they nor we doubt it. Unfortunately director George Spenton – Foster blows the impact of the surprise a little by showing the room that should house Control is empty before Blake opens the doors. Surely a tighter shot would have kept the twist from us until Blake himself realises it. Nonetheless it is a superb conceit, quite unexpected and enough to climax an episode with. Notice too how Blake declares “I did it!” when he thinks he’s won. The subsequent stand off too – with a nervy Servalan forced by Jenna to release them – is another class move. We’d forgotten about Jenna and Cally in the midst of everything else, just as we were meant to and even then Nation is not finished.
Gan has been a contradictory character; as intelligent as the others when it suits the script and other times rather simple. Casting David Jackson more for his size than suitability has resulted in mixed fortunes though he has an ability to keep the viewer on his side. Of course, I knew how this episode ends so it’s interesting to watch from that perspective. Gan gets far more to do than usual; he alone initially follows Blake down to the surface, he risks his life once crossing the security grid sooner than he should (and in more than 8 seconds probably but never mind!). It’s also Gan who trusts Veron, something of a mistake as it turns out. Then he almost falls off the railings when one breaks after the others have got across. Having him killed it a bold move and will surely help increase the jeopardy in future episodes. Had this been made today, a lot more would have been made of the moment but the almost casual way it is treated does seems too understated.  Inevitably you feel the viewer is affected more than the characters.
For his swan song, David Jackson delivers a good performance but despite his larger role, the episode really belongs to others. Gareth Thomas puts in his best theatrical performance making us believe in Blake’s conviction and suspect he may be going a little crazy while Paul Darrow excels once again as if Avon is surprised to find himself the voice of reason. Wearing a cup and saucer shaped white hat, Servalan looks ridiculous and it is notable her best moments come once the hat is removed. Slinking around like a panther is all camp fun but when the supreme commander is feeling less sure, you can see Jacqueline Pearce really acting. There is one moment where her expression alters even though her face does not appear to move. Brian Croucher is no Stephen Grief and the result is that Travis is more of a one note character but it fits the scenario here. Both he and Blake are similar characters in a way, their obsessions blinding them to common sense. It’s a shame their actual encounter is so fleeting but it does allow Travis a moment of victory to savour.
`Pressure Point` seals a strong opening salvo of season two episodes and is exactly the sort of story to keep us watching.
Notes 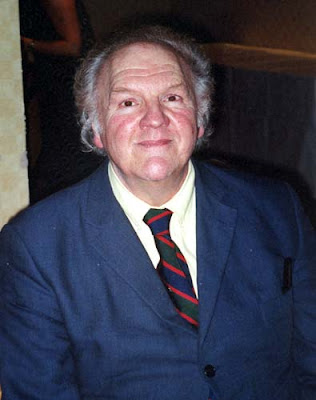 David Jackson was born in Liverpool in 1934. He trained at the London Academy of Music and Dramatic Art after being a member of several amateur dramatic societies. He made his TV debut in 1961 and some of his early roles were in series such as Doctor Finlay’s Casebook, The Larkins and The Saint. He played three different roles in Z Cars in the 1960s and 70s including the recurring character of DC Braithwaite in 22 separate episodes spread from 1972-77.
By the time he joined Blake’s 7 he had also appeared in other telefantasy series Sky and Space 1999. He was cast as Olag Gan by David Maloney who had known him from when he too was an actor. When planning season 2, the producers decided to kill off one of the regulars and Terry Nation’s choice for the axe was Vila as he was unhappy with Michael Keating’s playing of the role. However audience research indicated Vila was one of the most popular of the crew so it was decided Gan would be the one to go.
Post Gan, he continued to appear in well known series including Minder, Only Fools and Horses, Edge of Darkness, Rockliffe’s Babies, Wyatt’s Watchdogs and Lovejoy.
He also enjoyed a successful stage career starting at the Old Vic where he played mainly classical roles and then in repertory theatre in various cities including a year at Liverpool’s Playhouse Theatre. His many and varied stage roles included Fiddler on the Roof, Julius Caesar, My Perfect Husband and The Sound of Murder plus and the original production of Phantom of the Opera- he sings on the soundtrack album. His keen interest in Victorian theatre led him to produce his own One Man Show and he also devised and starred in a two handed play called My House Guest, Dr Johnson. In addition he regularly appeared in radio plays.
A science fiction fan, he was happy to be associated with Blake’s 7, attending conventions as well as joining other cast members in the 2000s for the release of the DVDs of the series. Sadly he died of a heart attack in July 2005.
Posted by John Connors at 20:45