A complementary double bill of David Hare’s new play South Downs and the Terrance Rattigan classic The Browning Version, first performed together at last year’s Chichester Festival.
David Hare’s new play South Downs opens with teacher Reverend Eric Dewley asking nervous schoolboy John Blakemore what he wanted to see him about, whereupon the latter announces he can’t tell him. This confuses the reverend; after all it was the boy who asked to see him? Such witty sleight of hand is very much the means by which Hare approaches what could otherwise be the too solemn or alternatively hysterical topic of growing up and questioning the accepted values. 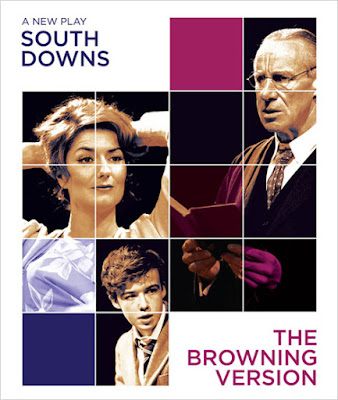 It’s a two pronged attack- Blakemore is an unusual twitchy pupil who nonetheless speaks his mind, challenging the accepted arguments of the classroom. The play’s best scene has him calmly eviscerating booming poetry teacher Basil Spear’s theories with nothing more than pure reason. This approach of course makes him difficult to befriend and a quandary for the teachers. There is also Jeremy Duffield  an older prefect about to leave who has inundated the debating society with inflammatory subjects- which Dewley does not like one bit. Duffield is the most popular boy in school an appears to exert control, albeit a causal, negotiated one over the reverend. Therefore, in exchange for Duffield keeping an eye on Blakemore, the debates can go on.
The older and younger boy in effect think alike- but whereas Duffield has almost grown up kicking against 1950’s values, Blakemore will be part of the changes. Anyone expecting melodrama of the kind often employed in these sort of dramas will perhaps be disappointed by the play’s denouement. Best not to spoiler it, suffice to say it is an act of simple kindness from an unexpected source that fills Blakemore with a hint that perhaps his time will come. The play ends with him smiling slightly.
Making his professional debut as Blakemore, Alex Lawther achieves what will surely be seen as a definitive version of the role and is ably surrounded by the more experienced likes of Nicholas Farrell as the wry, puzzled Dewley, Jonathan Bailey as the confident radical Duffield. Anna Chancellor as his theatrical mother and Andrew Woodall as the combative poetry teacher Spear.
South Downs has been written to replace Harlequinade, the short play traditionally mounted alongside the Terrance Rattigan classic The Browning Version but thought too unfunny and out of time to be revived for last year’s Chichester Festival. David Hare’s aim was to pen something similar but taking the pupil’s perspective (as The Browning Version is very much a view of teachers at public school). In every sense the result is a success with Hare’s dialogue getting right to the point and painting a portrait of the school as the pupils see it as well as offering a glimpse of the hopes that young people had in the early 1960s.  With minimal sets the focus remains on the words. 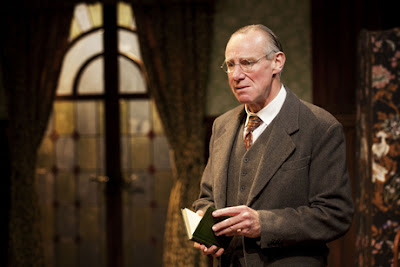 Of course, The Browning Version is a classic, becoming further known through two film adaptations. Set entirely in one room, it tells of retiring classics teacher Andrew Crocker- Harris, whose decades of austere but well meaning lessons have earned him the dubious moniker “the Himmler of the lower fifth” and who is now being surrounded by younger teachers some of whom have succumbed to the charms of his bored wife Millie. It is a difficult part to play I’d imagine because to simply feel pity for Crocker- Harris would mean that Rattigan’s intent has gone only partially understood. The playwright’s complex examination of a man in a performance that last not much more than an hour remains masterful and Nicholas Farrell capture every nuance. Anna Chancellor, as Millie is equally good.
As various players come to visit on the teacher’s last day, it is a simple gift that proves the catalyst which unlocks Crocker Harris’ heart just a little, just for a moment. And it is that which also exposes his wife’s cruelty as she sabotages even that moment of gratitude. The reason the play remains so true is that there are probably millions of Crocker –Harris’ in all walks of life, cocooned by their choices, unable to feel appreciated even if they are.
Together, and with their own separate directors, these plays have at their core an optimistic realism that makes them fascinating to observe and, more than that, to identify with.
South Downs / The Browning Version is playing at the Harold Pinter Theatre in London until July 2012.
Posted by John Connors at 20:25