Arctic Monkeys' first album was named with some prescience `Whatever People Say I Am, That’s What I’m Not` and this is a mantra songwriter Alex Turner has followed through so some sixteen years on they now occupy a territory rather close to what was once known, with some disdain, as `middle of the road` music. These days people are too wise to dismiss an entire sub genre especially one that produced some of the best songs ever. Strings, slow songs, conversational lyrics and atmosphere tinged with thoughtful reverie pervade their new album `The Car`. It helps that the album’s release was preceded by that of its two best songs. `There’d Better Be A Mirrorball` is tethered by a repeated synth line and finds Turner less cynical than the characters that inhabited `Tranquillity Base`. Wistful might be the best description of this song. For me though it is equalled by `Body Paint` which I described on Facebook soon after I first heard it as “class” and I’d underline that description now. The final runout could be David Bowie and that’s a complement. 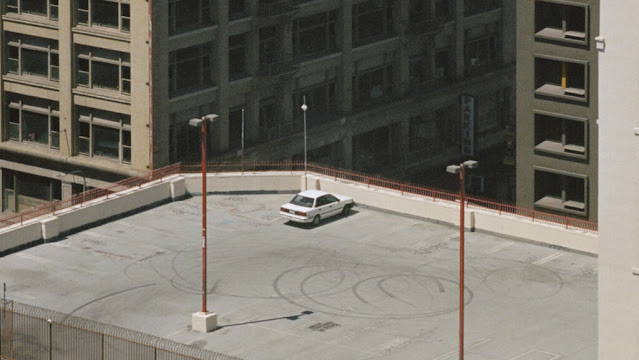 There’s plenty more fantastic songs here though, `I Ain’t Quite Where I Think I Aam` rides on a funky guitar and is one of several songs that appear to address Turner’s feelings about fame and touring though his lyrics always require lots more analysis. `Sculptures of Anything Goes` is darker, the most electronic track here whereas the title track is acoustic guitar led. `Mr Schwartz` has such descriptive lyrics that seem to be about a film producer. I had to look up what “dubbin” is, it’s what you use to soften leather shoes. `Perfect Sense` is from the Sixties songbook of epic proportions with the swings swelling more than ever and you can imagine Shirley Bassey singing this at the front of a James Bond film.  And if you listen in the intended track order we’re left with the conclusion “If that’s what it takes to say goodnight, that’s what it takes.”

Alex Turner’s lyrics are slightly less dense and more succinct than on `Tranquillity Base` though maintain his unusual turn of phrase; he seems especially good at penning intriguing opening lines. At thirty- seven minutes long there is no excess fat here, each song cutting out as soon as the message is delivered while James Ford’s production is clean with the orchestral interventions sparing and carefully placed. If that makes it sound too poised then an initial listen may seem that way but it's definitely one of those albums you need to hear multiple times to allow its charms to fully unfurl. It reminds me of decades ago when people listened to albums without doing anything else – this is not throwaway background music. Fittingly musical spirits from the Sixties and Seventies do linger yet don’t dominate. These is always a sense that perhaps Alex Turner is singing all this with a tongue in his cheek. The person who once made a show stopping speech about “this rock and roll” could not now be much further from it but whatever the motivation this is the work of an artist evolving and changing like the greats. 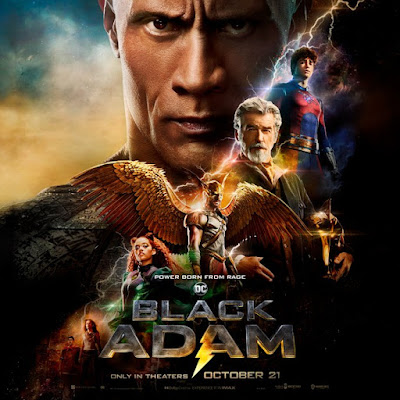 It seems as if each new DC movie is tasked with resetting their cinematic universe given the mixed reception to previous outings and Black Adam will definitely help being a solid,  action packed superhero film with a visual pizzazz. Though there are no big surprises it delivers kinetic scenes courtesy of interesting camerawork plus enough explosions and sizzling static to power a city. The slow motion action trick is deployed just a bit too often but the narrative does possess a satisfying, restless energy that keeps you involved. Our hero broods with a suitable glower though develops a lighter countenance as he realises some people are here to help him even if he remains a reluctant mixer which makes the film’s more human moments work surprisingly well. There is a pleasing uncertainty about Adam’s motives and methods while even his inevitable decision to help remains cautious and conditional.

The setting is a fictional kingdom called Khandaq though unlike, say Wakanda or Asgard, there are no shiny minarets or futuristic trappings. Instead it’s clearly a middle Eastern location with a downtrodden people in service to the militaristic Intergang. Teth Adam is a mythical figure who has become a symbol of hope yet remained buried deep underground for centuries till accidentally resurrected. This is explained via an initial sequence drenched in stark monochrome which is very well produced and carries its narrative weight lightly. Adam’s brand of superhero antics usually involves leaving behind a trail of bodies which doesn’t sit well with the Justice Society who see him as a threat. Can these multiple heroes work together to defeat a new threat?

There’s a lot to like about the resulting story even if it sometimes could do with a breather from the action. The Justice Society are similar to X Men (or indeed the Justice League!) but there’s just enough character to differentiate them and make each about more than just their power. All round good performances help too especially Pierce Brosnan’s twinkly Doctor Fate, Aldis Hodge’s relentless Hawkman and Noah Centineo’s klutzy Atom Smasher. Its Sarah Shahi as Adrianna, though who gets the best material as the non-superpowered mum just trying to stand up for freedom and look after her son (played with gusto by Bodhi Sabongui). She fades a little from the story later on and the film misses her perspective. Dwayne Johnson is well suited to the role of Adam displaying both deadpan levity and brutal power as required. All the flying around and pounding explosions may be too much for some but Black Adam is never less than a fairground ride of a movie. The ending includes a surprise cameo and the suggestion that we’ll be seeing this lot again; after this film I’ll be happy to have them back. 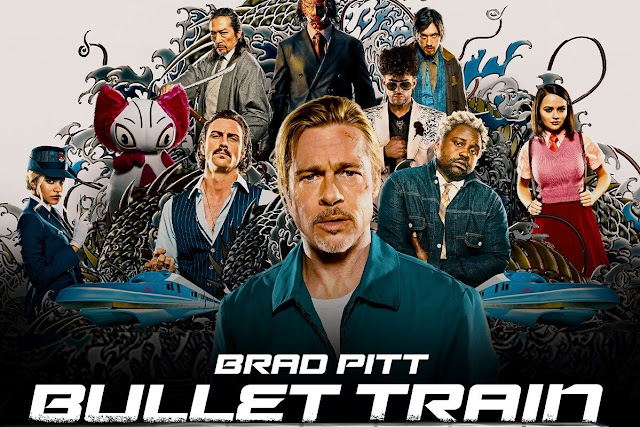 If a light hearted film about assassins sounds unlikely then you’ll be surprised by Bullet Train. It’s an absurd but hugely enjoyable concept set on the fastest train in the world and is something of a throwback. It’s pacy drive and matey banter recalls both the spate of movies set in confined space (there is even, literally, a snake on this train) and also the brash films of Quentin Tarantino or Guy Richie. For a while it seemed like everybody was trying to ape their style but now it’s calmed down a bit a movie like this can shine. Set more or less entirely on the train, it introduces several assassins, lots of double crossing or even triple crossing and plenty of hard-edged fight sequences. The confinement only makes these feel more powerful. A glorious cast really run with the funny script which possess a self awareness and plenty of great lines. There’s even an ongoing Thomas the Tank Engine gag which plays rather well into the film and not just because its set on a train.

My favourite characters though are the bickering brothers Lemon and Tangerine (everyone has code names) played with real chemistry by Brian Tyree- Henry and Aaron Taylor- Johnson. Though they at first seem straight from the Ritchie school of gangsters, their chatty repartee and comedy timing lights up the screen. Brad Pitt is also excellent as Ladybug who is dealing with all the mayhem while undergoing something of an existential change, preferring harmony to violence even though he’s an assassin! Some characters are only featured relatively briefly but everyone makes an impact. The fights are gymnastic without looking overly choreographed and there is a very inventive use of the train's paraphernalia and layout.

Its usual for a film like this with a heightened sense of reality to be brought together towards a more believable climax but `Bullet Train` is having none of it. With the dial already up to eleven and half an hour to go the finale is ridiculously great however much (or little) sense it may make. I missed this at the cinema and I’m sorry I did as it’s a great, funny thrill ride.