Reviewed by Chris Arnsby. Gary Davies: “Hi, really nice to see you again. We've got a terrific show lined up for you tonight. In the studio we have Shakin' Stevens, Steve Winwood, we've got Gary Numan, and the Bee Gees.” Mike Smith: “And also, live over here we have the Sisters of Mercy. Highest new entry this week.”

[13] THE SISTERS OF MERCY: this corrosion. Right down at the front of the stage watching The Sisters of Mercy are a pair of punks. They don't do alot now, but like Chekhov's gun they'll become important in the final act of tonight's programme. The bloke has the word IDOL printed in red on the back of his black leather jacket. “Coming up later, Nicky Campbell, new DJ on Radio 1,” threatens Mike Smith. 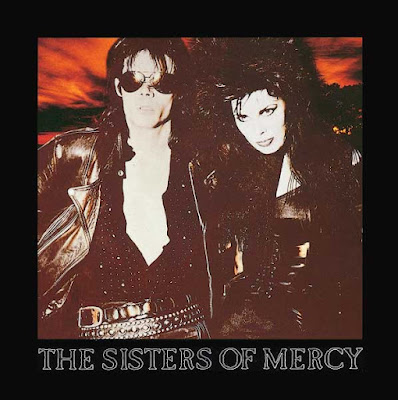 [3] MICHAEL JACKSON: bad. On video. Towards the end of the video the camera zooms in on a poster which is ripped off the wall before it's clearly visible. The text reads, “WANTED FOR [INDECPIERABLE] BAD,” and there a photo of a man. The photograph is of Martin Scorsese who directed the Bad video. The text actually reads, “WANTED FOR SACRILAGE,” and is a reference to the moral panic over his film The Last Temptation of Christ.
[22] BEE GEES: you win again. A song I taped off the radio. “Three guys who first appeared back on Top of the Pops in 1967 with a song called New York Mining Disaster.” The launch of Top of the Pops USA is drawing established acts back to the studio; Mick Jagger last week, now the Bee Gees. Neither of whom took the trip up to Newcastle to appear on The Roxy.

The presentation is surprisingly boring. The Bee Gees stand in a line and mime to the song. Brian Whitehouse (who's again in the Produced and Directed By chair) seems a bit defeated by the trio and largely just asks Vision Mixer Kathryn Randall to cut between close ups of individual Bee Gees or mid-shots of all three in a line. The studio rushes at the end of this tape show the Bee Gees are game for a bit of mucking about, and I wonder if something as simple as stationing them on the studio floor and surrounding them with the audience might have livened up the presentation a bit. (John- Shame as this is one of the best singles of the year) 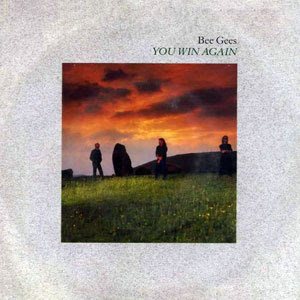 [16] GARY NUMAN: cars/are 'friends' electric? Gary Numan is looking tanned and relaxed. Two years away from the Top of the Pops studio have done him the world of good. The last time he was on the show (Berserker, 08/11/1984), he painted his face white and dyed his hair blue. I miss his early standoff-ish persona. Next door had a cat which wasn't allowed out of the house. I'd be minding my own business in the garden and suddenly become aware of the cat gazing superciliously at me through a window. I'd give it a cheery wave and it would blink slowly and slink off. The cat got nicknamed Gary Numan.
Lord knows why the BBC have captioned this single cars/are 'friends' electric? The single was definitely called Cars ('E' Reg Model). Looks like someone at Top of the Pops got confused by the single's cover. Over at Wikipedia an editor has also made an odd but logical decision. 'E' Reg Model is linked on the Car's Wikipedia page, but it doesn't go to a section about the remix. It goes to the 1987 portion of a page called Vehicle registration plates of the United Kingdom.
[36] STEVE WINWOOD: valerie. Sorry, I've got nothing.
[27] SHAKIN' STEVENS: come see about me. Lesser Shakey. It's an odd choice of song to cover. Nice enough but a bit weedy. (John- Weedy Stevens sounds like an American folk hero who wrestled buffalo or something completely contradicting his name)
Top 10 Charts.

[1] M/A/R/R/S: pump up the volume. The post-copyright dispute version without the “hey” sample from Roadblock, obviously. Also obviously, on video. Also, also obviously, M/A/R/R/S are not coming to the studio.
“Lot's of special things happening on Radio 1 this week,” says Gary Davies. Yes indeed. Most significantly the reveal of the new Top 40 is shifted from Tuesday to Sunday, so it could be revealed live during the Sunday afternoon chart show. Oh, and there's a new DJ called Nicky Campbell. Here he is. Top of the Pops plays out to the Number 1 song, as happened last week. Format change? We'll have to wait and see.

This recording (downloaded from a haunted pumpkin patch at https://mega.nz/folder/h0snQACa#uiNNqosfbdrfzODHsE1clw/folder/kpVhQAqJ) doesn't end with M/A/R/R/S. After a snatch of studio noise we cut to Gary Davies and the Bee Gees, who are recording a promo for Top of the Pops USA. This whole section runs to twenty minutes and it's way to long to go into any great detail. Here are the edited highlights. 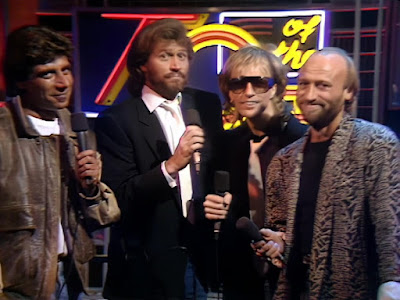 2) “Ah the three stooges,” is Maurice's self-deprecating comment when the trio are asked to record a second promo introducing themselves.

3) The Top Ten must be described as the “British Top Ten.” Gary Davies pushes back slightly and explains he had already described Rick Astley as “Britain's Number one,” but that's not the correct phrasing. Take two nails it.

4) Audience selection. A crowd of girls are ushered in to surround Gary Davies for the next link. They all have to be reminded to clap. Then suddenly from Floor Manager Carmella Milne, come the words of doom, “I'm sorry some of you have got to go.” “Front four... and the other one, you come out.” They are unacceptable for American television.
5) More instructions from Carmella Milne, “now anyone who's used on these links. You must applaud at the top of the link. You must look at Gary and look interested. Never talk afterward.” (John- One poor girl whose boyfriend was also called Gary followed these instructions for three days causing some confusion)
6) Watching Gary have his makeup topped up is like watching someone stroke a cat under the chin. 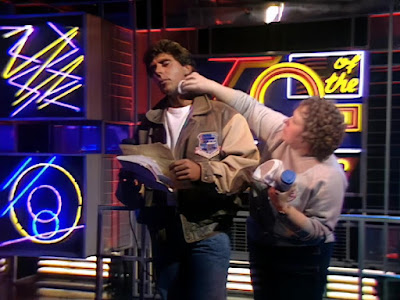 7) It's the two punks from earlier. America likes punks. They are quirky and English. Like Tower Bridge. There's a problem. One of the punks has something written on the sleeve of his leather jacket and it might be unsuitable for Prime Time audiences. The camera zooms in. It reads “NAKED LUNCH. DRESS FOR SEX”. Uh-oh. The team like the logo on the back of the punk's jacket (half Union Flag/half Stars and Stripes) but sex is one of George Carlin's seven words you can't say on television. Fortunately the punk is a natural. He is directed to stand with his back to the camera, so the picture can zoom in on the star, and then he turns, and moves the offending arm off screen. Effortless. And no one has to think about sex and Gary Davies at the same time.
8) Whatever time warp was going on with the British links last week has been fixed. All Gary's chart positions are correct for the week of 1st October.
Posted by John Connors at 21:20