Autobiographical comedy drama is sweet, biting and clever all at once!

Comedian Jack Rooke’s new six - part series is not exactly what you might expect. With a title like Big Boys and a story about going to University you might expect The Inbetweeners when they got a bit older but it’s something rather different. Yes, there’s lewd humour and references, plenty of substances imbibed, drunk or otherwise experienced and what those old video warnings quaintly described as “sexual swear words”. However they are the backdrop to a story about family and friendship, a story full of big hearted emotions couched behind the brazen exterior of young people’s outward behaviour. Adapted from his book these are all real life experiences presumably given an extra comedic edge and you’ll be laughing and probably by episode six crying as well, maybe even both together! Its set in 2013- 14 and sees shy tousle haired Jack (played by Dylan Llewellyn the “wee English fella” from Derry Girls) finally going to university after delaying for a year due to his father’s sudden death. Amusingly the campus is only a short drive from his house which means his force of nature mum (Camille Corduri, who is brilliant in this role) can pop in regularly. With no spare rooms in halls Jack is forced to stay in what he's told is temporary accommodation along with a mature twenty five year old student Danny (played by Jon Pointing from Plebs). Danny is a brash lad of the kind you meet in every big city centre if you ever go to a pub or club and as such would seem to have little in common with Jack whom we have already learned is gay though he’s not told anyone. Danny’s secret is his mental health for which he takes medication. You think this can go one of two ways but it doesn’t. Instead it explores the rarely visited dramatic terrain of a gay character’s straight best mate. They become real friends, the sort of friends who really care about each other and together they plunge into the craziness of university life.

The cast includes the formidable Annette Badland as Jack’s snappy Gran the bizarrely monikered Nanny Bingo (that has just got to be the name of a band one day!) Harriet Webb as eccentric Auntie Sharon, Katy Wix as the over enthusiastic student union counsellor Jules.  Izuka Hoyle is Corinne who becomes closer to Danny as the year progresses and Olisa Odele plays Yemi who guides Jack into the gay world and some of its practices. The whole cast are tremendous bringing such fun and life to their characters while Rooke’s lively, witty and true narrative means you will definitely want to binge watch all six episodes and wish there were twelve! In the central roles both Dylan Llewellyn and Jon Pointing are superb managing to balance the comedy with the drama perfectly. For this to work you have to like them both as well as believe in their friendship and you really do.

Jack Rooke himself narrates adding extra comic heft to the production. The early episodes are more brazen and packed with verbal and sight gags. Some of the material may be close to the bone but it’s all done with wit and is never mocking. Considering its billed as a comedy there is plenty of serious stuff as well, not just about sexuality and morals but also mental health. While Jack is struggling to get his inner personality out, Danny is almost the opposite as behind his bravado and confidence sit worries and doubts. It’s incredible to consider Danny is based on a real person who must be the most generous friend anyone could have- his compassion and understating are remarkable. 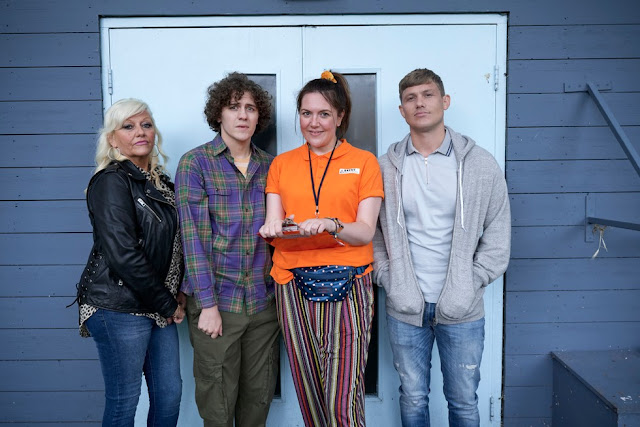 The refreshing aspect of Big Boys though is how it skirts away from the obvious even if some of the rites of passage- both gay and straight- are familiar tropes of both drama and comedy. Each one is handled with an honesty and a different approach so it feels like you’re seeing these things for the first time. Also the show does not have a nasty bone in it’s body, even the arguments and the aggro are couched in such a way that something good comes out of it. Funny situations are aplenty, highlights including some odd looking garden gnomes, a hilarious spelling mistake, Jack’s frequent mishaps and Jack’s conversational gaffs. The dialogue is sharp and sassy plus there’s an eclectic musical soundtrack going on.

Despite a clearly limited budget the show does convey the student life with all its hedonism while also addressing important issues. Like all good comedy shows the pace sometimes slows a little for more serious moments; the last two episodes bring this into focus as Danny is struggling to deal with his issues. There is a powerful scene in episode six where Danny visits his gran, played by Sheila Reid, in a care home. We see how quickly this illness can change from comic forgetfulness to sudden mood changes with the fractured reality for the person with the illness and the bewilderment of the relative on the receiving end. It could come from a serious drama and I know from experience this is what it is like dealing with a relative with dementia. Jack’s coming out scene too is handled so well without playing to any of the cliches of something so many dramas have shown.

That’s the show all over really, it’s such a warm hearted involving and very funny programme and I’d recommend it to any open minded viewer.