Reviewed by Chris Arnsby. Gary Davies: “Hi. Good evening. Now, not only are we live tonight, we also have six live bands in the studio. We start off with the number eight record this week, here's Five Star.”

[8] Five Star: The Slightest Touch. The Top of the Pops partyometer has been cranked up to seven for the live show this week. Pom-poms and plastic hats for some. Balloons and streamers for the rest. Confetti to be thrown in Gary Davies' face forever. And fixed, excited grins for all. Michael Hurll is mixing Smilex with the studio smoke. I've mentioned before that these days I download Top of the Pops from the Palace of Righteous Justice (https://mega.nz/folder/h0snQACa#uiNNqosfbdrfzODHsE1clw/folder/kpVhQAqJ) where the majority of the episodes are digital copies of the BBC masters, for some reason. This episode is especially interesting because it's a recording of a live edition and it starts 30 seconds before the episode gets on air, We see a countdown clock and then someone whispers, “it's all gone quiet.” It's probably Gary Davies. “Thirty seconds,” shouts a more distant voice, let's pretend it's Floor Manager Iain McLean. “Wooo,” adds Gary Davies, which provokes a few cheers from the audience. “Could have done with a big wooo, then,” is Gary's follow up which gets a much more spirited response just before the opening titles start to roll. 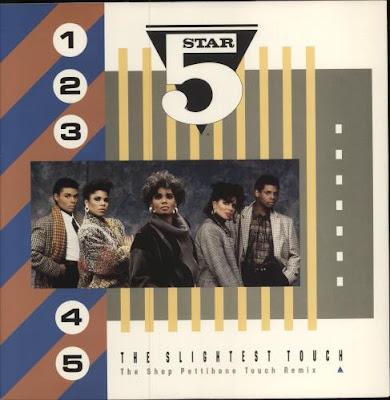 [13] The Smiths: Sheila Takes A Bow. “Well we're well and truly live tonight,” says Gary Davies. Why not prove it. Hold up a copy of today's paper, or reference a topical event. Maybe the fact that Emily Fox, American cupstacking champion was being born in Highlands Ranch, Colorado. Or that NJ Devils farm team Maine Mariners (AHL) move to Utica (Devils) NY. I'm sorry. The On This Day website I've been using is rubbish.

OK internet. Tell me about the 23rd April 1987.... Ronald Regan was US President -insightful; people born on this day are Taurus -I'll add it to my profile of Emily Fox; “If you liked videogames you were probably playing ALF: The First Adventure” -oh for God's sake.” “The next time you can reuse your old 1987 calendar will be in 2026” - that's sort of useful, I guess. Nice to know I can finally take those old Garfield calendars out of the loft and stop them making a frightening bulge in the ceiling.

Meanwhile, Michael Hurll is boldly making changes to the Top of the Pops format (all praise to the format) again. Instead of the standard second song video, we get The Smiths. Who, Wikipedia tells me, are about three months away from splitting up. Now there's a fact Gary Davies could have used if he wanted to prove the show was live.

The Smiths seem to be in fine form, although drummer Mike Joyce does get up and leave the stage abruptly at the end; split confirmed! About 15 seconds into the performance a member of the crowd chucks a bundle of streamers at  Morrissey. He gently grabs them from the air as they drift down in front of him and for a next few seconds he works them into the Morrissey act as an impromptu prop, before gracefully discarding them. What is cupstacking, anyway? 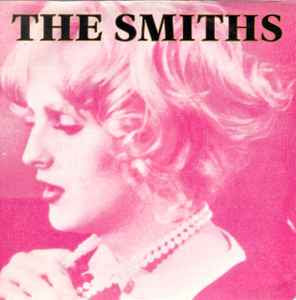 [14] Kim Wilde & Junior: Another Step. No disrespect to Kim or Junior, but this sounds like a Eurovision entry. Actually, if this had been the 1987 song for Europe rather than Rikki we might have done better than 13th.

[2] Judy Boucher: Can't Be With You Tonight. “We're having an amazing party tonight,” says Gary Davies as confetti is dumped on his head. His “I wish they'd stop that,” which follows might be the most honest thing he's said all night.

Last time Judy Boucher was surrounded by unlit candles. This time the person credited with Design, the unlikely named Dacre Punt, has fitted out the stage to look like an empty nightclub where someone has thoughtlessly left the dry ice machine turned on.

[17] Glenn & Chris: Diamond  Lights. Oh Lord. It's Glenn & Chris, or Hoddle & Waddle as everyone preferred to call them. Passage of time means I have no idea which one is Glenn and which one is & Chris, but one looks really uncomfortable on stage while the other is having more fun. Last week Andy Lazell, from the Visual Effects Department, set off loads of thunderflashes behind Living In A Box. This week Sinclair Brebner (is it made up names week on Top of the Pops?) has set up loads of those charges that release a rain of sparks. The set behind & Chris Glenn resembles the bridge of the USS Enterprise mid-Romulan attack. What the heck are Diamond Lights anyway? Is the whole thing just sneaky product placement for Diamond White cider? “The new Wham! Has arrived,” is Gary Davies' verdict. I can't tell if he's being sarcastic. 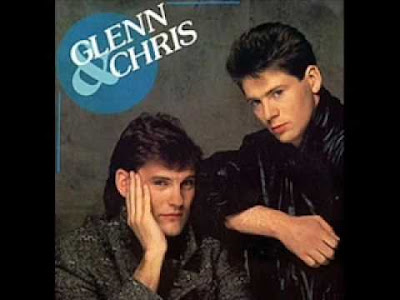 Life's a doddle for Hoddle and Waddle

Top 10 Charts.
[1] Madonna: La Isla Bonita.  “You've just seen Hoddle & Waddle [see, I told you everyone called them this], Britain's new Number One is Maradonna... or should that be Madonna?” In an evening of live performances, Madonna has to spoil things by selfishly not coming to the UK to perform her new Number 1. She's still on video.

[7] Terrence Trent D'Arby: If You Let Me Stay. “Next week Steve Wright and Peter Powell...” is  Gary Davies going to make it to the end of the programme without having more confetti dumped on him? Disappointingly the answer is yes. It's all being saved for Terrence, buckets of the stuff are dumped behind him during the introduction.

And then... FORMAT CHANGE! The current tradition at the end of the show is to shrink the song down into a smaller picture and leave it playing while the credits run at the bottom of the screen on static cards. This week Terrence stays full screen and the credits roll up in front of him. Ah yes, I hear you say, but the tradition only applies to videos, this is a studio performance. Ah yes, I say back, but when Duran Duran came on to perform Skin Trade [26/02/1987] they still got the small box/credits treatment. So this is definitely a FORMAT CHANGE! by Michael Hurll. The question is, is this a permanent FORMAT CHANGE!? Let's see what happens next week.

Terrence does his stuff. Including the now obligatory drop into hurdle stretch, as the crowd whoop at the end of the show but, because this is a mastertape recording of a live show we get to see what happens behind the scenes when Top of the Pops goes off air.

Floor Manager Iain McLean's voice booms out of the studio PA system. He thanks the audience, tells them they did a very good impression of a live audience and then adds, “if David Plaice is here... I'm holding your diary David and if you don't get here very, very quickly I'm going to give away all your secrets.” And then the tape runs out.

Performance of the week: The Smiths: Sheila Takes A Bow.