At the end of Channel 4’s showing of the debut instalment of this series the continuity announcer provides information for any viewers who have been affected by anything in the episode. Presumably he means viewers who may have recently had their bear shot or been chucked in a lake whilst inside a trunk or maybe if it’s in case any unhappy empresses are watching? Otherwise it’s hard to see what effect the episode might have on viewers other than to make them laugh. Hugely entertaining and quite mad at times, Tony McNamara’s  apparantely partly true origin story of the woman who would become Catherine the Great is cut from the same satirical cloth as shows such as The Thick of It though at times could be called Carry On Catherine! It’s frequently amusing and once or twice will make you gasp at the fact that you are finding a violent incident actually rather funny. 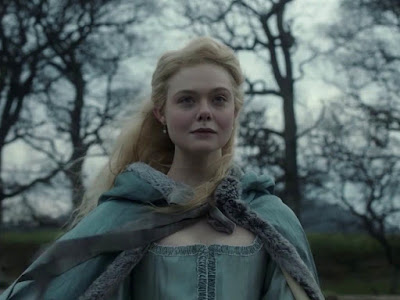 Based on a play, The Great introduces us to Catherine played initially with a wide eyed innocence by Elle Fanning as she is brought to the court of Russian Emperor Peter to be his wife. As played by Nicholas Hoult against his usual type Peter is vulgar, violent and a bit rubbish at being an emperor. Propped up by lackeys who do the hard work while he drinks, has sex and hunts Peter pays only cursory attention to his new wife who in turns finds little purpose in court life. She is supposed to spend her time with “the women” who gossip and “look at hats”. They also play a pointless version of bowls wherein they just throw the balls onto the green together! This is a really funny moment actually. When Catherine asks how long the game lasts they tell her all afternoon. She does manage to persuade Peter to allow her to open a school however when he discovers women are to be taught there he has it burned down.

There is a subtlety at work despite the outbursts of violence and crudity that allows the episode to tread that fine line between humour and just being gross. The aforementioned bear shooting is a pivotal act that not only supplies a laugh but turns proceedings more serious for a brief moment. There are scenes too that paint a wider picture of Russia at this time. The way McNamara balances the funnies with the drama is perfect and he is also able to mix contemporary dialogue with period drama turn of phrase effectively without it sounding anachronistic. There are also some delightfully surreal sequences such as when we think Peter and Catherine are walking through the woods alone till it is suddenly revealed half the court is behind them! Or when Peter introduces Catherine to his mummified parents who are on display in one of the halls! 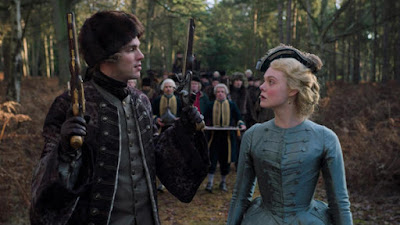 Elle Fanning’s ability to convincingly portray Catherine’s evolution from love struck teenager to stoically ambitious woman in just 45 minutes is brilliant especially as some of her reactions have to be silent expressions of frustration, amazement or disgust. As she gradually realises just what her new husband is like her demeanour alters with each new insult or snub. Nicholas Hoult has a great time in a role that must be such fun to play. There are strong performances all round though, especially Phoebe Fox as former lady turned maid Marial who seems she will be the driver of Catherine’s ambition and has a dry wit about her. There’s also Sacha Dhawen as the scholarly Count Orlo whose intellectual pursuits win an ally in Catherine. A great opener that shows huge potential for this series.