Isn’t it weird how small a social circle both Barnaby’s have had? Basically any time they host a shindig at home the only people who get invited are Barnaby’s assistant and the pathologist. One can only image the table conversation once the wine gets flowing. Most series would at least include a couple of non speaking extras to share some food or relatives you only meet once however long the programme runs but in Midsomer social gatherings are only for people from work. The other thing they always do is have Barnaby’s wife seeming to like the assistant more than Barnaby does. 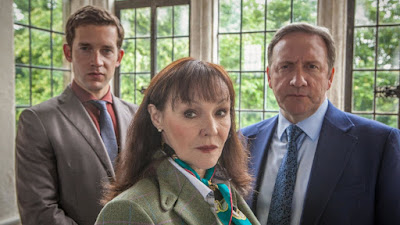 More recently there’s been a romantic frisson between the assistant and the pathologist. Obviously this wasn’t very likely to occur in the earlier days when the pathologist was the much missed Barry Jackson’s George Bullard. Since then female pathologists have had a bit of chemistry with Barnaby’s assistant. One suspects a slowburn relationship was planned for Nelson and Kam Karimore (doesn’t that name seem like it comes from a song!) even though she sort of had a boyfriend. However Brian May put a stop to all that, sort of. So now we have the new Sergeant Jamie Winter having a history with Kam.

Anyway this episode deals with the most remote village in Midsomer, Bleakridge. This is a place so remote the police never get there on time to solve any crime (even though Barnaby and co drive to and from it with little problem) so the residents have set up their own vigilante group. It does beg the question as to how enormous Midsomer County is! This group is no neighbourhood watch, rather a military looking bunch of 23 villagers complete with uniforms and, bizarrely, their own castle!

Writer Paul Logue has to stretch out a credible explanation for such a large force in such a small place adding lines about criminals converging on the place due to its isolation. There’s also no sense that the police disapprove of such an out of control set up. The results though are glorious fun as the dictatorial Ingrid Lockston deploys them with ruthless efficiency and some arch acting courtesy of the always enjoyable Frances Barber. You can well believe she used sheer force of personality to get the villagers to toe the line.

The narrative unfurls well with cracks in the organisation and some secrets soon tempted out of the shadows while there’s a particularly brutal signature to the murders involving heavy hammers which rather makes the unveiling of the culprit a tad unlikely. Would they really have the strength to do all that? The red herrings are also tasty especially the amusing reveal of one villager’s clandestine comings and goings. Another crisp Renny Rye direction really makes the most of the brutal attacks. Most importantly of course, there is the debut of Paddy, the Barnaby’s new pet dog. Sykes brought a real canine personality to the series (I was hoping he’d get a solo episode) so there are big paws to fill!