Reviewed by Chris Arnsby. Janice Long: “Nick Cotton and the mob are after you. Hello, welcome to Top of the Pops.” Paul Jordan: “Yes, we've got a great show. Before that we've got Doug E. Fresh, we've also have Dee C. Lee, we have Wham! and also a record that I've had on my brain all day today. Janice Long: “In fact this lot have been going up the chart faster than they've been coming down the shaft, because they've just been released from the lift. It's Madness and Uncle Sam.” (John- So what’s the Nick Cotton reference for then? Is he on later?)
[24] Madness: Uncle Sam. Qui est paul jordan? He's one of the new faces of 1985, like Dixie Peach, and he won't last long as a Top of the Pops host, like Dixie Peach again. Paul Jordan disappears from hosting duties in April 1986, and from Radio 1 by May which is less than a year since he was first introduced on The Saturday Picture Show, 06/07/1985 as a “brand new Radio 1 DJ,” between TV funnyman Les Dennis and Battle of the Planets. Dixie Peach's stint on Top of the Pops runs slightly longer, June 1985 to May 1986, and he gets bonus points for staying with Radio 1 until 1987. Plus, he gets additional Light Entertainment bonus points for an October 1986 appearance on Blankety Blank with Les Dawson and guests Bella Emberg, R*lf H*rr*s, Lesley Judd, Karen Kay, and TV funnyman Lennie Bennett.
Madness have apparently been stuck in the lift at Television Centre. It doesn't affect them and they turn in a likeable performance. Did they really get stuck in a lift? Who knows? Attempting an internet search using variations on the words Madness and BBC just brings up assorted BBC-political-correctness-gone-mad stories from the tabloids. 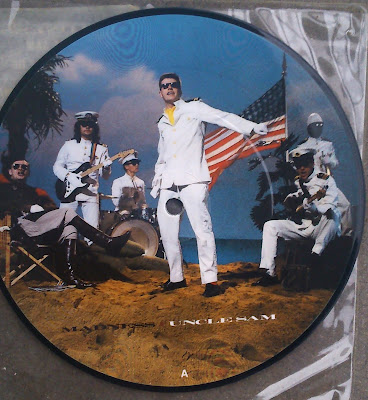 [2] Wham!: I'm Your Man. On video.
[18] Dee C. Lee: See The Day. In a chronic failure of research this turns out to be Paul Jordan's second trip into the studio. His debut performance was actually on the 03/10/1985 edition; embarrassingly skipped by me to avoid getting too far behind with these write ups. For the record his first words were: “Thanks very much indeed Gary [Davies]. Have we got a great show for you tonight. We've got a wonderful show. We have Cameo, we have Iron Maiden, we also have Rene & Angela, and a brand new number one.”
Paul Jordan's debut on The Saturday Picture Show is unique. I can't think of another Radio 1 DJ who got such a pump-priming debut, and his four month turnaround between starting on Radio 1 and hosting Top of the Pops is towards the faster end of the scale. It took Simon Bates five years to make the leap. Although the turnaround time did decrease through the eighties as some of the longer term hosts retired, which perhaps reflected the changing perception of Top of the Pops as a Light Entertainment show in its own right to Radio 1's TV extension.
Interestingly Paul Jordan disappears two months after Simon Mayo arrives in March 1986. Was Paul Jordan's gig only ever intended to be a short term one? Or is it coincidence or conspiracy or something more sinister? (John- Or – was Paul Jordan actually Simon Mayo?)
Top 40 Charts.
Top 40 Breakers: [23] Whitney Houston,: Saving All My Love For You. “What a pedigree for this lady Cissy Houston is her mum, Dionne Warwick is her auntie,” there's something very odd about listening to Janice Long introducing Whitney Houston to the viewers at home for the first time. [19] Dionne Warwick & Friends, That’s What Friends Are For; [14] Lionel Richie, Say You Say Me.
[12] Doug E. Fresh & The Get Fresh Crew: The Show. And then something remarkable happens in what has otherwise been a middling programme. I'm not sure I saw this performance at the time. If I did, I can say with 100% confidence that I would have hated it. I had no frame of reference for rap music, and as a stroppy 13 year old I knew what pop music sounded like -and it wasn't this.
I suspect people at the BBC agreed with me. Top of the Pops doesn't have much of a history with rap. They liked Debbie Harry rapping in Rapture (1981) but studiously ignored Grandmaster Flash and Mellie Mel's White Lines, even as it spent 60 weeks in the top 100, 17 weeks in the top 40 and 8 weeks in the Top 10; and went in and out of the Top 10 twice. Top of the Pops definitely preferred the more kid friendly end of the rap/hip-hop axis (and, I'm worried I'm showing my 40plus years of ignorance just by lumping these two genres together) like Break Machine with Street Dance.
That said, there are extenuating circumstances. Top of the Pops limits itself to what's in the charts and more importantly who's available at the time. When The Sugar Hill Gang broke the Top 20 with Rapper's Delight the BBC went to the effort of importing footage from a US show Soap Factory (06.12.1979).
Zoo danced to The Message when Grandmaster Flash and the Furious Five got to number 19 (02/09/1982). Well, they were allowed to dance to a shortened version assembled by cutting out all the references to drugs, people p-ss-ng in sta-w-lls, girls pushed under trains, etc*. It's 50/50 whether Zoo danced rather than showing the official video because the blurry promo is barely of broadcast quality, or the cutting required to make the video suitable for the BBC audience would have been too obvious. And, on the subject of Grandmaster Flash, the drugs references in White Lines would have been a problem, and he did perform Step Off (17/01/1985) while he was in the UK.
All this is a fairly longwinded way of saying that the BBC didn't know what to do with rap. It's startling how few results BBC Genome returns for Rap Music until Tim Westwood arrives at Radio 1; although Genome does include this gem from 30/03/1991 “This week, Syd Little and Eddie Large stay cool and hit the nail on the head as stars of rap Vanilla Ice and M C Hammer”. 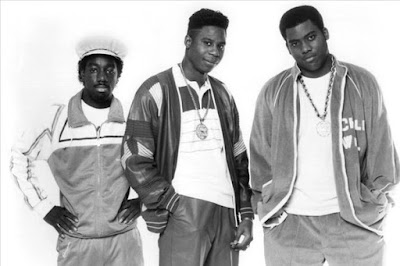 Let's pause for a moment and imagine how Vanilla Ice sounds starting his car.

The staging of The Show is remarkable right from the start, with Doug E. Fresh and Ricky D lounging in a couple of stock BBC office chairs. It rapidly becomes clear that Michael Hurll (he's back) doesn't have a clue how to visualise the song. Look at the staging on Uncle Sam and See The Day; lots of zooms and pans, and mobile cameras, and fast cutting to highlight specific musical riffs. There's very little of that here. In fact at times Michael Hurll just cuts to a static four shot of the group and leaves Doug E. Fresh and Ricky D to get on with it.
The static camera work may result from a series of technical errors that you'd normally never see. On the line “Yo, where's Will and Barr?” Vision Mixer Priscilla Hoadley cuts to a low angled hand-held camera shot of the studio ceiling which wobbles and pans uncertainly until it finds the edge of Doug E. Fresh's head. Then on “No, no, no-no-no no we didn't,” there's a cut to a wide shot of the stage where a handheld camera operator is caught right on the edge of shot. He quickly backs away because this sort of appearance is streng verboten.

There's a sense that without any kind of memorable tune - beyond the percussion and some beatboxing (for the first time ever on Top of the Pops)- the technical crew are finding it next to impossible to match the positions worked out in camera rehearsal. No wonder we keep cutting back to a simple static four shot. I think this song may have defeated Michael Hurll.
n addition to beatboxing, there's what seems to be a live vocal, and crowd work. And you've got to admire the idle way Ricky D sits back cross-legged in his chair with the microphone stand held at an extreme angle. This is a groundbreaking performance, regardless of what you think of the song, and I'm astonished it seems to be a forgotten as a piece of television. The number of mentions of it in BBC4's Story of 1985 documentary; zero.
Top 10: [9] Talking Heads, Road To Nowhere; [8] Eurythmics & Aretha Franklin, Sisters Are Doin’ It For Themselves; [8] Level 42, Something About You; [7] Queen, One Vision; [6] Elton John, Nikita; [5] A-ha, Take On Me; [4] Jennifer Rush, The Power Of Love; [3] UB40, Don't Break My Heart; [2] Wham!, I’m Your Man.
[1] Feargal Sharkey: A Good Heart. Feargal's on video this week. It's mostly generic concert footage (or at least recorded to look like concert footage) but with a short preface as the camera pans across an American street and past a drive-in style banner which reads “Feargal Sharkey,” under which sits a black and white American police car which may be (but is most likely not) The KLF's Ford Timelord. Feargal is talking angrily on the phone, and storms off leaving the handset swinging.
99% of the promo is shot indoors and could be filmed anywhere. What's the point of spending lots of money going to America to record a video indoors? Is this really a hoax of Moon Landing proportions? Was this in fact shot at Elstree. And, if it was, then is that street just a matte painting and mirrored footage (so the cars appear to be on the correct side of the road) of Shenley Road, Borehamwood?
If this is all true, then who pocketed the money that was due to be spent going to America? Answer me that Feargal! (John- You should have asked him when he was stood next to your office all that time!)
[28] Midge Ure: That Certain Smile. Audience dancing and credits.

Performance of the week: Doug E. Fresh & The Get Fresh Crew: The Show.

*There's a whole world of contradiction about which bits of The Message are acceptable for the early evening audience and which aren't. The section quoted below is deemed suitable for Zoo's A Certificate** capering -except the bit in italics which was cut.

Turned stick-up kid, but look what you done did

Got sent up for a eight-year bid
Now your manhood is took and you're a Maytag
Spend the next two years as a undercover fag
Bein' used and abused to serve like hell
Til one day, you was found hung dead in the cell
It was plain to see that your life was lost
You was cold and your body swung back and forth
But now your eyes sing the sad, sad song
Of how you lived so fast and died so young so...

(John- Thank goodness that's all, you'd have me Krumping all over the place in a minute...)