The subtle knife is great idea because though it can suggest Lyra and Will can easily recover the alethiometer things don’t turn out quite as they expect. There’s the matter of Mrs Coulter being at Boreal’s mansion. This is another top notch Ruth Wilson dominated episode as Mrs C becomes uncomfortably accustomed to life in our Oxford discovering unpleasant truths and clothes as well! Her expression when looking at a pair of jeans or a coffee for the first time is mild disgust though her reaction to her host’s museum / lair is to not be as impressed as he expects. 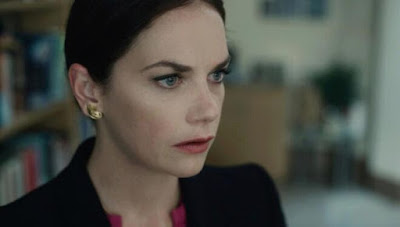 The episode hints at much of what Marisa feels she has lost notably her academic standing which was always denied her by the Magisterium simply because she is a woman. We even learn she has published scientific papers albeit under a male pseudonym. This rejection only seems to have galvanised her into becoming the person she is today. Yet crucially ewe continue to see her human side. There’s a meaningful shot of her staring at a mother and baby through a car window and while nothing is said it speaks volumes. She sees women in our world achieving and living in a way she has clearly not been allowed to. In Ruth Wilson’s performance we can always see the strength of will that allows her to travel a long distance without her deamon whose grumpy façade remains. I still ponder on the interaction between them, whether Marisa hates her daemon or not. Does it represent all the frustration she feels.?

Thus her reaction to Mary Malone, whom she decides to visit, is a sort of guarded admiration but also jealousy that in our world a woman can progress so far. She seems astonished that Mary runs a department. Doctor Malone is becoming a great character, never easily misled or tricked yet willing to take a leap of faith if need be. This week the angel voices contact her advising her on a course that leads her to that open window between worlds which Boreal has often used. Simone Kirby is marvellous at maintaining Mary’s innocence yet also her intelligence. Love the way the character packs a rucksack for her journey into the unknown. It’s a shame the conversation between the two wasn’t longer; the script instead choses to reveal Marisa’s thought in a later scene with Boreal. The episode allows itself some levity albeit with a serious message about our consumerist world which Boreal has exploited solely it seems for his own end. 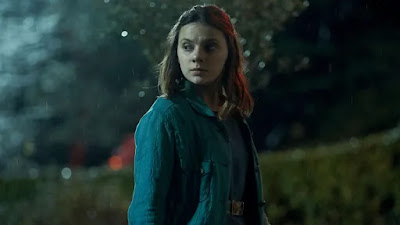 This is something of a holding episode – indeed Boreal and Mrs C spend a while waiting for Lyra and Will to turn up- yet contains some individually excellent scenes. It also pays off with a very tense sequence in which Pantalaimon and Mrs C’s monkey slug it out as Will tries to get the alethiometer. Sharp editing manages to encompass two situations at once. It’s an brutal though interesting fight because having seem last season how strong this monkey can be, here it is well and truly bested by Pantalaimon’s more vicious turn. How different to last season’s battle between the two. Surely Mrs C cannot harbour any further hope of winning her daughter back after such a tussle? It suggests that Lyra has more similarities with her mother than she would want to admit. All the way through the fight, Lyra looks concerned at what she is doing and what she has the power to do.

Elsewhere there is also tension etched across Cardinal McPhail’s face as he appears to be turning into something of a mad leader with interpretations of events that baffle his cowed advisors. At this rate he’ll be one of those leaders whose entire cadre of advisors are locked up! The season has done well in keeping multiple storylines spinning and when they appear to be concluding, rather like that knife, a new strand cuts in and we’re off in an interesting new direction. I do wonder what casual viewers- if indeed any are watching – make of it all. The relatively easy to follow first season has diverged considerably but so far the story remains one about people rather than objects and that’s why it stands out.