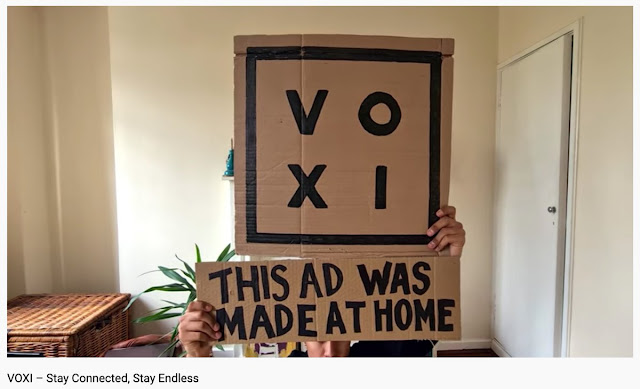 The advert was created by Adam Ronan and Adam Claridge and directed by Jocelyn Anquetil. The main actor live streamed the camera feed to the producers via video conferencing app Zoom so that he could be directed remotely. The footage was then assembled by the producers with no stage of the process using an office.
Max Taylor, Vodaphone’s Consumer Director said:  “I hope our story of a totally isolated team delivering a first class ad from their home offices and kitchen tables will inspire other brands to adapt and challenge their traditional thinking to create unique stories of their own.” Ogilvy, the advertising company that helped create the new ad, said: “We are incredibly proud of this new work for Voxi; for its creativity, cultural relevance and innovative approach.” Where Voxi may have missed a trick though is by not making any offer on the product. Like most phone companies they are pushing their product as essential in keeping people connected during the lockdown yet cost is mostly kept to the small print. Here's a thing I found about the making of it -

Once company has gone further though. Departing from their usual frivolous approach, EE present a straight faced Kevin Bacon who admits that “normally I’d be making a joke” but instead he is here to announce unlimited data till October for NHS workers.  “We’re clapping for you, we’re rooting for you but most of all were thankful for you” he concludes. For catching the mood of the nation and responding in a way they can you have to admit that EE have done well.
Other companies have made more subtle adjustments to existing adverts, like Lloyds Bank’s roaming horses which has been running about for a while and have now been edited to make a reference to the current situation. That is to say the narration makes the reference not the horses; they just trot about as usual ignoring social distances rules. McCains have re-jigged their usual take on the modern family dynamic by showing people at home once again making sure to show us every conceivable family dynamic except horses!
The big supermarkets of course don’t really need to advertise at the moment being almost the only shops open so they’ve taken the angle of how they are continuing to supply the things we need (no mention of a distinct egg shortage at the moment) and how safe they are making their environments.  In their own style each of them highlight the measures they’ve taken though I had to smile when Tesco’s ad mentioned “we might have to ask you to wait outside” as if it’s a rare thing. Someone I know was in a queue outside a Tesco for an hour! They have also updated their `Food Love Stories` strand with clips of people using Tesco food at home.
Microsoft are clearly eager to make even more money from the whole palaver. Their Portal is featured in an ad – shot before the lockdown - in which a daughter buys one for her mother’s birthday and predictably having not really known what it was the latter soon finds it indispensable. Not only that but Microsoft Teams has become essential to some businesses during the crisis and sure enough an ad has popped up in which various people like scientists and business types extol its virtues. Though Voxi’s ad was the first made at home, the Teams ad consists of clips of people using the application from various locations. Microsoft’s advertising always suggests that people can’t possibly live without their products though in some cases this may be true right now.
A number of other businesses have only in the past week or so come up with similar ads in whch the multi tiled view of a personal laptop is replicated. Nationwide have been doing these personal ads for a while now with poets and comedians and they’ve now gone straight into the more dramatic realm with a couple of clips in which couples send a message to themselves to be looked at in six months. Judging from recent statements it may be optimistic to imagine we’ll be back to normal in that time span but even so these are amongst the first ads to contain some positive thoughts suggesting perhaps the next stage after ads simply showing how we’re coping.
Of course the government itself has been doing a bit of advertising though in time honoured tradition they are described as public information films. The first one was obviously hastily assembled and featured the now familiar figure of Chris Whitty, the government’s chief scientific advisor telling us “stay at home”. This sombre warning was rather amusingly added into a variety of audio and video clips over subsequent weeks the best of which was the Happy Days theme re-imagined; “Monday, Tuesday…stay at home” etc! The issue with this one is that when it was recorded he probably actually had the virus himself. This was followed by a slicker version showing a montage of ambulances, intensive care wards and someone delivering a package as the narrator declares that “Coronavirus is a national emergency.” There’s now a third iteration with a tone un line with the current government thinking that we’re past the peak but there should be no let up yet.
There is however no advert about for Corona whose makers I’d imagine must be the most frustrated business of all. Unlike the drink, their name is on everyone’s lips but there is no way they can exploit it and potentially people won’t even buy the product because they imagine you can catch the virus from it because some people think like that!