The War of the Worlds Episode 2 review

This production is making the most of a story most people watching would know something about and is doing so by showing just how chaotic and dangerous things are on the ground. Every shot we’ve seen so far of the Martian war machines has been from a character’s perspective and this aspect is carried through in the second episode’s signature sequence in which hundreds of panic stricken people on a beach are attacked by one of those machines. It’s a brilliant miasma of fire, panic and mayhem set against a backdrop of plumes of black smoke over a choppy sea. Just to add to the cinematic feel of things, George and Amy’s reunion takes place across the upturned wreckage of a boat; remind you of a major film? Likewise, George’s initial view across the beach is a homage to Dunkirk, both the real thing and the movie. Moving back and forth through time, the story unfolds gradually yet if you were to look at synopsis very little happens. This is more than anything a mood piece- every scene could be an album cover or a painting. 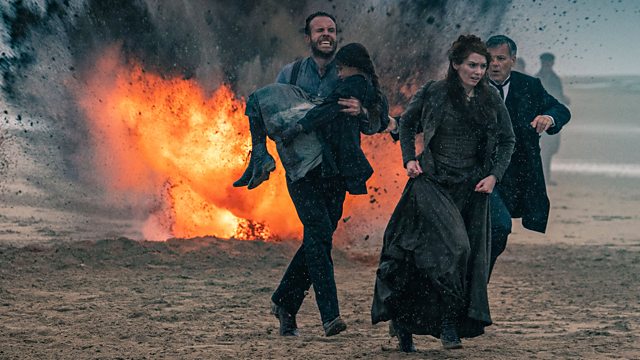 Another well mounted sequence intercuts Chamberlain’s very English and understated  speech designed to give confidence with scenes of the what is actually happening which rather suggests the opposite is true. Later in the same location, a Martian war machine peeks around the corner and unleashes toxic black smoke. Yet despite these and other wonderfully staged developments this episode manages to find more time to focus on character than the opener did.
Anyone expecting to follow a set list of people through the story may be surprised with the frequency with which seemingly prominent cast members perish. The arbitrary deaths heighten a sense of danger accentuated by the noise the war machines make whenever they turn up. So we don’t know really which characters will make it- the unnamed Artilleryman fries earlier than you expect, the old woman looks like she won’t last long and even Nicholas Le Prevost’s superbly pompous Chamberlain is a goner before the end in the sort of horror motif that this production excels in.
I know some Wells purists (who will probably never be happy with any version) and tv critics are not taken with what they irritatingly refer to as the `domestic dramas` but surely we have to know something of these people if we’re to avoid seeing them just as cannon fodder? Personally I think it’s essential in any sort of action story to have that side to the characters we follow otherwise there’s little at stake. So this episode sees some excellent work from both Rafe Spall and Eleanor Tomlinson who bring the best out of the script which I have to admit can sometimes be a tad basic. I’m glad Amy is neither simply a terrified woman but neither is she some sort of modern Sarah Connor type. Spall’s George is a timid but genuine man who’s chosen tale from all his experiences to date is that of not saving the Artilleryman. Its an un-showy but strong performance that grounds the series; every so often he’ll wince or stutter hinting at the trauma George is really feeling. I suppose it’s the Engishness too that is instilled in the novel. It is hard not to imagine parallels with the `wartime spirit` and suchlike though of course the book was penned prior to even the first World War. 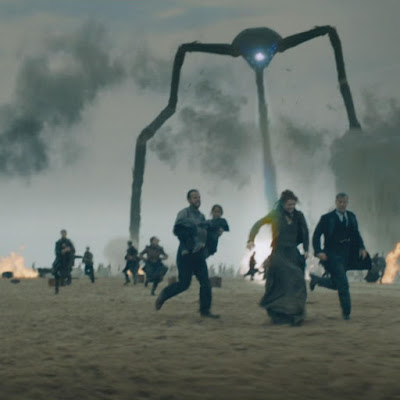 The future scenes philosophise a little over a so called victory – and would benefit from more depth in that respect - and bring with them the surprise of Ogilvy turning up years after we assumed he’d died in the early moments of the first Martian object’s awakening. This part of the narrative was invented by Peter Harness and doesn’t feature in HG Wells’ classic so it will be interesting to see how far he takes a modern perspective on war as hinted this week. Or indeed if George is still alive. In this version nothing can be ruled out or in.
I have a feeling that the episodic nature of this production is perhaps not the ideal way to view it. Essentially this is a three hour movie with the production ambition to reach for big screen ideas. The story works best- like the big scenes in this episode- when it seems like an unstoppable juggernaut powering forward and is ill suited to being broken up unlike some series which benefit from that approach. Still it’s an impressive addition so far to the various other versions and has the potential to deliver a great final episode.