The original song `I’m a Gnu` was released in 1957 as a single produced by George Martin who would later become The Beatles producer. The lyrics were altered to reflect the product. It finishes with their slogan at the time- “For the tea that picks you up, pick up Typhoo". The Gnu itself was a strange choice simply because alot of people would not really have known what one was. The character was created bty Tony Cattaneo who also devised the Tetley tea folk.
You can see lots of Typhoo ads on, erm, GnuTube.

“Its about as likely as a duff bottle of Hirondelle”
Nowadays we mostly encounter adverts on television platforms or YouTube but back in the Seventies print adverts were just as important and this series promoted a wine by using artwork of unlikely occurrences such as a cloud shaped as a nine or flying pigs with the slogan “It’s about as likely as a duff bottle of Hironedelle”. Nowadays the wine is the subject of derision amongst connoisseurs despite the fact that it helped popularise the drink with the mostly beer orientated British. Selling very cheaply- it was £1.79 a bottle in 1979- Hirondelle appeared to be a French white table wine but in fact was Italian. It never mentioned the grape variety it was made from but experts reckon it was Muscat. It was imported into the UK but bottled here.
Its provenance was tested when its makers claimed that the wine was from Austria though it was the case that its UK annual sales were higher than Austria’s total yearly wine production. The company then admitted the wine was actually from Hungary. The 1979 Good Food guide only described it as “acceptable” though it remained popular until superseded in the 1980s by other cut price brands. 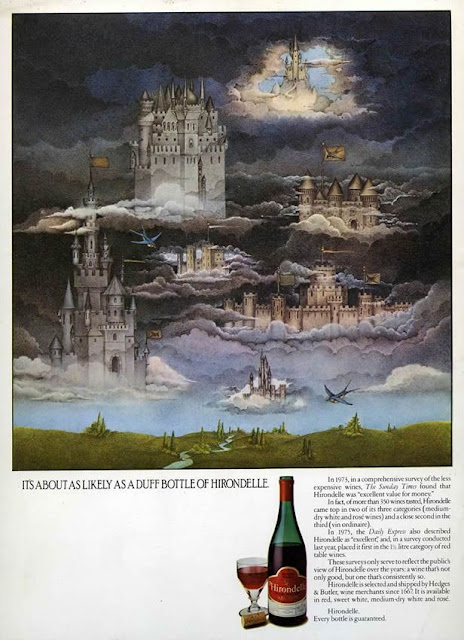 “Curly Wurly”
The product of a spontaneous invention from a confectioner called David Parfitt who worked at Cadbury’s Bourneville factory, the Curly Wurly is a nigh un-chewable intertwined chocolate coated caramel ladder from a time when people didn’t bother much about their teeth.  Or indeed their health. Kids however loved biting as hard as they could to pull off a section of the bar and chewing the toffee insides for hours. It was launched in 1970 for the princely sum of 3p. Imagine being able to buy something for 3p now! You can still get Curly Wurly and apparently Cadbury have softened it slightly to reduce the risk of dislodged fillings.
If the bar seems unlikely then the adverts are even more so. They featured comedian Terry Scott of Terry and June and some Carry On films who despite being in his mid -forties was dressed up as a school boy! It all looks decidedly creepy to the modern eye but he was very much the branding icon for the product appearing not just on tv and print ads but t shirts and toys. Its quite an early example of the sort of cross media campaigns that we see today.
While its’ fun to imagine that Bruce Springsteen name checks the chocolate bar in the song `Blinded by the Light`, he’s actually referring to a slang term for s small sports car. Or at least slang that Bruce made up. A shame otherwise a Bruce Springsteen / Terry Scott crossover would be a thing.  Ok here’s one of the tv ads -, brace yourself…