Faster than light- and that’s just the speed of each episode!


I took a punt on The Flash largely on the basis of people saying it was less starchy than most superhero affairs and it was a good choice indeed. Admittedly it has taken me considerably longer to watch the 23 episodes comprising the first season than it takes Barry Allen to whizz through a year in his life but it has been well worth the time. In fact it’s probably the most enjoyable series of its type since Buffy the Vampire Slayer. By which I mean it may have the accoutrements of a superhero show and indeed there is a miasma of impressively delivered visual effects but this is a series stuffed with people you like and care about. There is a minimum of frowning and emotional beats are earned. It is also something of a lesson in how to couch clever timey- wimey plots into something that is invigorating and tense rather than smug.


The trick is to go with the story though this might be a harder sell for any physicists watching! As a child Barry Allen witnessed the murder of his mother in the midst of what seemed like an indoor lightning storm and his father was imprisoned for her murder. Only Barry knows this “impossible thing” was real. He is brought up by Joe West, a detective who becomes surrogate father and eventually his boss. Barry grows up to become- as the opening voiceover rather amusingly puts its “an ordinary forensic scientist”. Over at the pioneering STAR Labs one evening a particle accelerator experiment goes wrong causing a huge explosion and whoever is caught in the resultant lightning storm develops unusual powers. Barry himself spends 9 months in a seemingly irreversible coma until STAR labs’ genius boss Harrison Wells offers to help, When he finally awakes Barry discovers he can run at incredible speeds and is he declares in the opening sequence “the fastest man on Earth”. As the season develops clues stack up that lead him back to his own painstaking investigation into his mother’s murder and the `man in the yellow suit` who seems to have been there. At the same time, helped by Wells and his assistants Caitlin Snow and Cisco Gomez, Barry uses his powers to help Joe fight other super powered criminals or `metahumans` as they are dubbed. 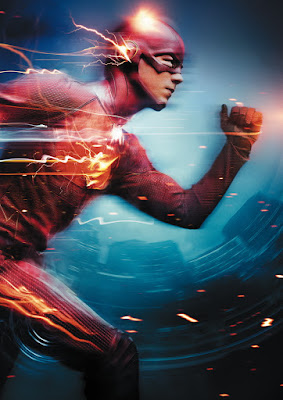 The show does not initially stray too far from the established template of secret superheoric growing pains with the implications and side effects of Barry’s power being a mixture of amusing and serious. With Cisco on hand to give every metahuman nemesis a handy comic book moniker and Barry’s feelings for Joe’s daughter Iris the stage appears to be set for a light but hardly essential fantasy show – a bit like Lois and Clark with better effects and stories. It even riffs on the tried and trusted Superman motif of the girl Barry loves being more interested in the superhero he has become than real `best friend` Barry.
However the more episodes you watch the more you realise this is a series with more. For a start Barry and Iris grew up together so any mutual attraction is awkward to say the least. Throw in Joe’s sidekick Eddie Thawne whom Iris becomes attracted to plus the fact that Joe is effectively a step father to Barry and you have a much more interesting dynamic which the season plays with. It gives all the superhero stuff a wholly grounded backdrop.
The other central thread revolves around Harrison Wells himself. When we first meet him he is the proud but contrite scientist whose apparent mistake caused the accelerator catastrophe. Yet episode after episode ends with a coda teasing more and more about this enigmatic man churning up queries and questions that feed into a bigger arc simmering all the way through. The viewer is allowed to see what the main characters don’t know sending additional thrills through subsequent episodes. The metahumans start to vary beyond what might seem like basic X Men copies and each is gifted with more than just the standard crazy antagonist schtick that other shows default to.
A whole 9 episodes from the end (!) these plotlines explode in the episode `Out of Time` which is the sort of multiple revelation bonanza that would normally be kept for a finale and ramps up the series to another level. At a point where most shows would be flagging or becoming repetitive this breaths additional life into the narrative and you can see the series expanding rather than settling for a groove. If things have been fast till now, it speeds up even more!

I could actually spend the rest of this post detailing the way the narrative twists and turns down different avenues until it comes out the other end being about something else altogether. Thing is you need to enjoy the ride. What I can say is that each development is both breathtaking and makes sense within the fiction. Furthermore -and I can’t recall another series of this length about which this is the case - there is no duff episode at all. Not one. Isn’t that something?


Some may find the series’ moral tone occasionally grating and it is true that occasionally speeches will sound like they came from the mind of scriptwriter rather than a person yet for the most part both writers and actors give verisimilitude to even the wildest idea. Of course actual scientists- particularly any working in the field of particle physics may laugh their lab coats off but I bet they’ll be wishing they had some of the powers we see in the show. When a series is this much fun- and then can turn spine tinglingly thrilling in a moment – the only important thing is for the plot to be believable in its own context and it certainly is.


The scripts are so well calibrated to mix action, humour, emotion, mind boggling ideas and character work in a way that I’ve not seen in a US fantasy show since the aforementioned Buffy. So many series are content to stick to being mostly grim or puncture that with black humour or concentrate on action yet The Flash manages to juggle all of these and more. It plays with themes of identity and relationship, of responsibility and power yet it all mixes together. It helps too that beyond the concepts there are dilemmas we can relate to- Barry’s desire to help free his father, Joe’s wish to protect Iris, Iris’ relationship with Barry as well as old rivalries and suspicions especially the way that Joe suspects Wells from the start. 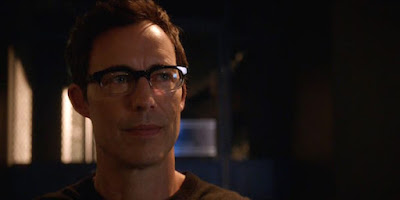 Given that it’s a weekly show with a presumably swift turnaround the performances are remarkable especially Jesse L Martin’s Joe West and Tom Cavanagh’s Harrison Wells who really glue the series together. Martin takes what could be a slightly clichéd father figure / older, wiser cop and makes him believable and identifiable. Cavanagh is mesmersing as Wells’ outwardly benign personality masks something else. Directors love to find his sideways looks, knowing glances and make them chilling. As the series develops there is a strange tension to Wells. In the lead role Grant Gustin is a perfect combination of geeky yet fearless, funny yet earnest and has a whole gamut of developments to work through as Barry’s scenario develops which he accomplishes with aplomb and his chemistry with Candice Patton’s Iris is a delight.


Though ostensibly a spin off from another series, Arrow, knowledge of that show is not essential for this first season even though its characters do occasionally show up. Whether I will be tempted to catch up with the other show remains to be seen, especially as it seems a more conventional superhero type show with lots of shadows and brooding. I’m avoiding giving all but basic details because the way this season unfurls is something you really should see for yourself. The thing is to go with what is presented on screen and don’t think you’ve been told everything till the end (and even then..) In between you’ll enjoy the effects which are top class for a tv show as well as the banter and all the pretend science. If by about the tenth episode you’re perfectly accepting of even the most extreme idea then you’ve been hooked! Later on there are some absolutely thrilling episodes that will leave you open mouthed as the season drives towards a powerful climax.