Shown on E4  recently – now available to buy.
Parallel worlds are a staple of the fantasy genre but it is probable the concept has never be done quite like this before. First shown last December and now available to buy, Tripped is a riotous journey through a number of alternative realities courtesy of our somewhat hapless heroes Danny Gates and Milo Edwards. There is something of The Wrong Mans about their being roped into an unbelievable scenario and tipping from one peril to another but that series was set in the world of espionage and this is a full on fantasy show. However at its heart it has similar themes of friendship and loyalty. 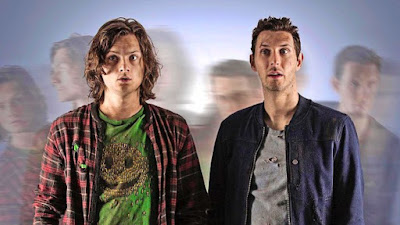 It starts before Dan’s planned wedding to his girlfriend Clare a party from which Milo returns worse the wear and off his head whereupon a bearded version of Dan is despatched in front of him by a man with a large sword.  Both have popped out of a big twisty wormhole thing. Milo thinks he’s imagined it till the body is still there the next day. It soon transpires that multiple versions of the two are being hunted through different time lines while a future version of themselves is trying to help them. They soon get roped into the chase courtesy of a bracelet that opens a wormhole. The alternative times are similar to ours but with some different twist- in one Milo is a presumed dead rock star, in another the apocalypse seems imminent. The duo also encounter different versions of Clare and the mad swordsmen Callum. The result is a fast paced four part romp that refuses to be weighted down by the concept and instead becomes a hugely entertaining journey of amusing peril.
The idea came from Jamie Mathieson (lately the writer of some well received Doctor Who episodes) and he originally conceived it for a never made series called Alt. The series though is mostly penned by brothers Harry and Jack Williams. The writers conjure up anarchic scenarios and keep the momentum up over the four episodes. While some of the alternate worlds are serious in nature, the comedy sits easily on top and is often used in unexpected ways. Where else would you find a cameo featuring Peter Andre as the Prime Minsiter and then have him deliver a serious address from Downing Street?
The situation is a playground for the production team and especially the actors as they get to look at things from multiple perspectives. Blake Harrison is well known as one of The Inbetweeners but gets to show much more range here as the once `dangerous` Dan struggles to take in what is happening and remain faithful to `his` Claire.  The character provides an everyman quality that stops matters becoming too crazy. BAFTA winner Georgina Campbell as you’d expect is excellent giving each of her versions of Kate a feisty likeability even if her warrior is quite scary.
The surprise star though is the far less experienced George Webster whose main version of Milo is surprisingly likeable for a lazy weed smoking loser. With this and the other Milos, Webster gives an impressive assured range of performances seemingly able to turn his acting chops to any type. While the others are good at spinning different behaviour from their alternates, Webster goes that little bit further to become different people. Definitely a name to watch for the future. Both he and Blake Harrison do gel so well you can believe the characters have been friends for life.
While the show is obviously on a smallish  budget it manages to achieve good effects- the wormhole through which they travel is brief but fun-  and, when needed, a suitable sense of scale. The team just about manage to cover lack of budget and redressed sets.
In terms of the way the relationships shift the thrust of the narrative is Dan’s new found sense of responsibility battling his wild past and an attitude that Milo still has.  Milo meanwhile is unwittingly searching for something that he could do to give his life some meaning; he is drawn to the parallel worlds where he is someone more important and he learns that he can do things for himself.
The series can over reach itself on occasion with some of the supporting cast lacking the discipline of the main trio in keeping their acting from going too over the top.  Despite a cliffhanger at the end its hard to see how a second series could sustain the plot any longer but this four parter is a perfect fun ride. It could do with more jokes and slightly less repetition but Tripped is a lot of fun if you enjoy the likes of Bill and Ted or The Wrong Mans. Or indeed wormholes!
Posted by John Connors at 22:31